Studying the cellular functions of plants, such as these tomato seedlings, can help scientists and plant breeders improve qualities like yield and taste. Image adapted from: Markus Spiska via Pixabay; CC0

From lab to table: boosting plants with biochemistry

When it comes to plants, we have a lot to be thankful for: food, fuel and biomaterials, not to mention their ability to produce oxygen and mop up carbon dioxide (CO2) from the atmosphere. As the planet continues to warm, we’ll ask even more of plants. By 2050, we will need to produce about 50 per cent more food to feed nearly 10 billion people. At the same time, hotter, drier climates will make growing crops more challenging.

New Academy Fellow Professor Harvey Millar is delving into the biochemistry of plant cells to investigate how they make their own energy to grow—including in challenging environments. “Eventually the outcomes from this affect what farmers grow and what everyone eats,” says Millar, who leads the ARC Centre of Excellence in Plant Energy Biology at the University of Western Australia.

Millar studies the cellular mechanisms of plants and how they affect growth and energy efficiency. These mechanisms impact how plants perform: for instance, where you can grow them, how much leaf, grain or fruit they yield and what they taste like. To get the information needed for these ‘big picture’ outcomes, plant biologists like Millar go to the cellular level to gain a deeper understanding of how plants function.

The powerhouses of cells are their mitochondria: tiny organelles that provide energy to sustain all the processes involved in cell metabolism. Plant mitochondria have a range of special features that determine how energy is made, distributed and used for plant growth.

Millar’s research has provided new insights into how plants use mitochondria to perform cellular respiration—an essential process for every living organism. This chemical reaction effectively does the reverse of photosynthesis, by using carbohydrates and oxygen to produce CO2 and water but releasing energy not as light but as cellular ATP. While animals fuel cellular respiration by eating, plants use the carbohydrates they have made themselves. Plants can only photosynthesise when light is available, but they respire all the time.

Plants have a fixed amount of ‘food’ available in their leaves to undergo respiration at night. If their carb reserves are exceeded, cell degradation will occur, which is bad news for plant function and growth. To avoid this, plants rely on regulatory mechanisms to adjust their respiration rate to the metabolic and environmental conditions. Scientists can track plant cell respiration rates to get an important readout of energy expenditure and mitochondrial activity in plant cells.

Millar’s team has recently been studying why some amino acid combinations appear to either stimulate or suppress respiration rates in leaves at night. They have discovered that these effects are controlled by what is known as the Target of Rapamycin (TOR) kinase signaling pathway. Using high-throughput lab studies, they have obtained direct evidence that the TOR signaling pathway controls respiration rate at night. “This is really exciting and it gives us new opportunities to change that rate of respiration in plants,” says Millar. These findings will enable new methods to control the timing and quantity of energy generated for cell maintenance, and could lead to plants that are more efficient at growing in limiting environments.

Millar also carries out research into plant proteins and the amino acids they make. “My team is especially interested in the proteins that plants build using the energy that their mitochondria provide,” he says. 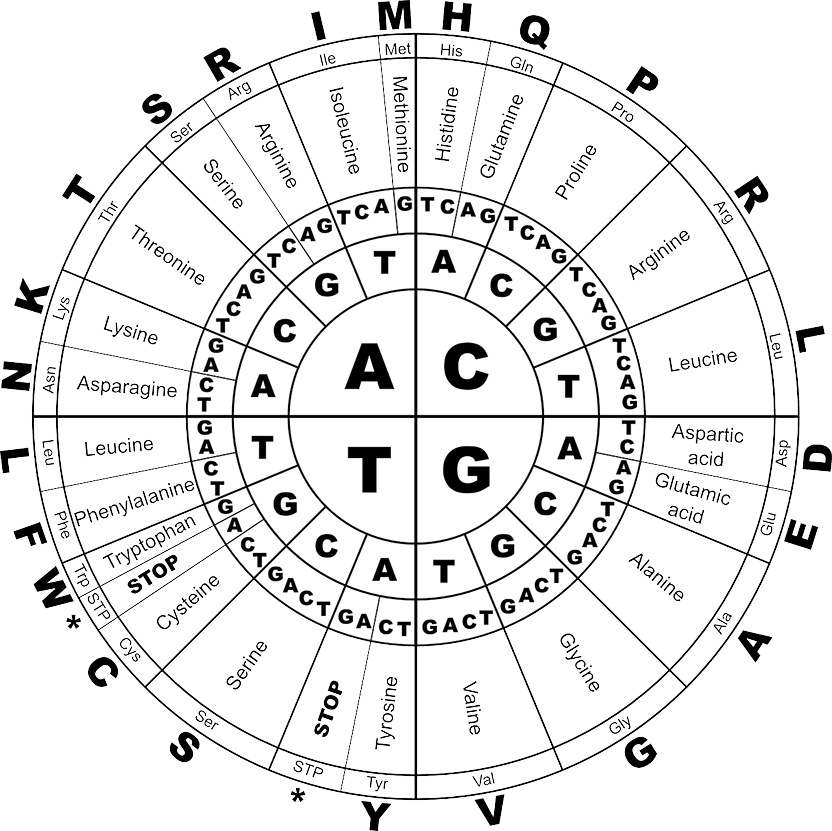 Plant proteins contain vital amino acids for cell function in plants and animals. The codon wheel pictured can be used to translate DNA codons into amino acids. The sequence of the bases (A, C, G and T) in DNA determines the protein's unique genetic code and provides the instructions for producing molecules in the body. To use the wheel, find the first letter of the sequence in the inner circle and work outwards to see the corresponding amino acid. For example, ATG = methionine.

Image from Openclipart-vectors via Pixabay; CC0

Proteins are strings of amino acids that wind up into complex structures of many sizes, shapes and types. They are essentially machines, each with a specific job to help cells function. The proteins in plants not only enable them to grow and thrive, they also provide key nutrients for the herbivores and omnivores that eat them—humans included. “Plant proteins contain all the amino acids we need to make our own proteins to make our cells work,” explains Millar. “Through this nutrition, we are intrinsically connected to the world of plants around us.”

Millar's group is working on advances in plant proteome analysis: the study of the complete set of proteins that can be expressed by an organism. Proteome data informs scientists about plant functions, including defence pathways against multiple environmental stressors, such as high salinity and anoxia (lack of oxygen, which is common in waterlogged soils). In one study focusing on salt tolerance in Australian wheat varieties, Millar found that differences in the mitochondrial proteome were associated with whole-plant salinity tolerance—a key insight into this vitally important crop.

Millar has been involved in international collaborations to build plant proteome databases, as well as working on protein location and protein–protein interaction prediction. These studies can all improve our understanding of how plants develop and interact with their environments.

Millar’s interest in plant biology was sparked early on—his family features several scientists who were also avid home gardeners. He was later taught by an inspiring high school chemistry teacher with a love of plant biology, and his first part-time job was as a lab assistant growing plants in greenhouses at CSIRO. “As a protein biochemist with a love of gardening, it is the perfect combination of my interests,” says Millar.

For Millar, science represents the opportunity to improve people’s lives in different ways. “We're part of that information chain to ultimately produce ideas that breeders can implement, which farmers can grow, which people eat. Sometimes these are small, incremental changes… but sometimes there's this possibility through science that a big change is possible—it could re-imagine the future of food.”