The science of studying the microbes of ancient humans and Neandertals can be a glamorous business.

How different are you to your distant Neandertal relatives that lived 50,000 years ago? Well, for starters, you’re probably taller, have a smaller nose, and your brain might even be a bit smaller. And there’s something else that’s probably pretty different: your microbiome—the trillions of microbes that live in and on your body and play a huge role in your health and well-being.

Our own DNA—around 22,000 genes—is only a fraction of the genetic information that we carry around with us every day. It’s estimated that the entire complement of microbes that are in and on our bodies contains more than 3 million genes, and microbes make up around 2 per cent of an average adult’s body mass.

And no two people’s microbiome is going to be exactly the same—genetics, diet and lifestyle all play a role in determining the kinds of bugs that like to hang out with you. As for Neandertals and our other distant cousins, while we can’t be 100 per cent sure of what their entire microbiome looked like, we have a couple of methods of making some pretty good comparisons. There are two things that get left behind after death that can sometimes be preserved right through to the present day for scientists to study—the gunk from teeth, and poo. Science can be a glamorous business. And it's a happy coincidence that these two archives offer us access to the ancient equivalents of the most studied modern human microbiomes—those of the mouth, and the gut.

Studying the types of microbes found in these sources of ancient microbiome data helps scientists disentangle the influences of diet, environment and genetics. While studies have shown that changing your diet can quickly and dramatically alter the composition of your gut microbiome, genetic and evolutionary influences are also important. By providing a glimpse into what the microbiome looked like in the days before widespread agriculture, antibiotic use and mass-produced processed foods, studying what ancient humans’ (and Neandertals’!) microbiomes looked like will help scientists better pin down the role the microbiome plays in current epidemics of disease and other health issues.

We argue that only by also exploring our microbiomes both today and in the past can we fully understand what it means to be human.Christina Warinner et al. 2015 Ancient human microbiomes, 79: 125–136

Straight from the Neandertal's mouth

The dental plaque we so assiduously scrub off our teeth when we brush every night before bed has proved to be a goldmine for scientists that study microbes. Plaque is a thin sticky film made from proteins and microbes that forms on our teeth. Over time, it hardens to form tartar, also known as dental calculus. This is actually a combination of different forms of calcium phosphate minerals (the same stuff as our actual teeth are made from), which have different ratios of calcium (Ca), phosphate (PO4) and water (H2O or sometimes in the form of hydroxide, OH). Some of the minerals can also have small amounts of magnesium (Mg) or iron (Fe) incorporated into their crystal structure. As these minerals form, tiny amounts of microbial matter can be trapped inside and are preserved, for thousands, even up to millions, of years within the mineral casing.

By extracting DNA preserved within the calculus, scientists can determine the species of microbes present in the mouth of a Neandertal, and investigate what they can tell us about the diets and even the lifestyles of our closest extinct relatives. Tiny amounts of food, like proteins and starches, can also become trapped and preserved within dental calculus, providing some information about a Neandertal’s food preferences.

It is possible to find entire bacterial organisms preserved within dental calculus—scanning electron microscope images show many different types of bacteria. But a full identification of the full range of microbes present in dental calculus requires DNA extraction and sequencing.

Identification of the microbes present in Neandertal dental calculus from samples found in the Spy cave in Belgium revealed that these guys were meat-lovers, dining on woolly rhinoceros and wild sheep.

The same study also looked at calculus from two Neandertals from El Sidrón cave in Spain. They found that one chap was eating mainly mushrooms, pine nuts, moss and even tree bark.

The researchers also obtained a glimpse into the health issues that affected Neandertals 50,000 years ago. One of the Spanish Neandertals had suffered from a dental abscess, which was evident in his skeletal material. Also present in this individual’s dental calculus was the DNA of Enterocytozoon bieneusi, which is a rather unpleasant gastro parasite.

The DNA of poplar bark was also found in the same sample. Poplar bark contains salicylic acid—the basic ingredient of aspirin. Also found were traces of the Penicillium mould, which likely came from eating mouldy plant material. These ‘medicinal’ items were not found in the other sample, leading to the conjecture that this particular Neandertal was attempting to treat his health issues with pain-killers and potentially with antibiotic products.

Another aspect of the microbiome is the presence (and absence) of pathogens—disease-causing microbes—in other ancient (non-Neandertal) dental calculus. Studies have reported that microbes known to cause tooth decay that leads to cavities were much less common in the dental calculus of humans that lived around five to seven thousand years ago. The growth of these microbes is supported by sugars, so their absence indicates a Neolithic diet low in easily fermented sugars. An increase in these microbes has been found to coincide with the establishment of agriculture.

Another way to study the ancient microbiome is using coprolites—the official (and polite) term for fossilised poo. Poo is chock-full of microbes—each milligram of it contains more than a million bacterial cells. This means it decomposes quickly, and it’s rare to find well preserved coprolites except in very dry, or very cold conditions. Dinosaur coprolites have been dated back to Cretaceous period (146–66 million years ago). The oldest known fossilised poo (from an animal) that’s been found so far goes back to the Paleozoic Era—around 270 million years ago.

Human coprolites are very rare, and tend to only be preserved in either very dry or frozen environments, however samples have been found that date back to the Late Paleolithic—around 22,000 years ago. Most human coprolite samples are found within latrine deposits, and so unlike with dental calculus, the microbes found in these most likely represent the microbiome of an entire community, rather than a single individual. They also tend to be quite degraded, more reminiscent of compost than fresh fecal material.

Provided they have been well-preserved, and are unaffected by contamination from soil microbes, microbial communities found in coprolites can provide information regarding ancient diets, and also the gut microbiome of whoever produced the coprolite.

One prominent study of fossilised poo describes the microbiome of coprolites found in three distinct environments, from southern USA, northern Chile and northern Mexico, and compared the findings with modern microbiome data. They found that the ancient microbiomes were a closer match to modern rural communities than to the microbiomes of people from urban environments.

As with the dental calculus, coprolites can also tell interesting stories from (slightly) more modern times. Excavations for an urban development in the Belgian town of Namur discovered latrines from the Middle Ages, complete with barrels of human waste that had been sitting around for nearly 700 years. Samples from these barrels of poo showed evidence of bacteriophages. These are microbes capable of transferring genes from one type of bacteria to another, and are responsible for a number of metabolic functions, and also the development of antibiotic resistance in some bugs. Their presence in the coprolites, and the increased diversity of the genes they carried, compared to those found in modern humans’ guts suggests the natural inbuilt defences of our gut bacteria may have weakened in modern times, perhaps as a result of modern sanitation and hygiene practices. 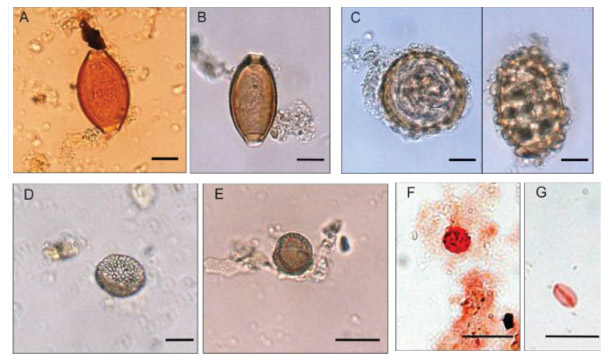 Studying ancient remains provides insights into past diets and the evolution of the human microbiome—it’s amazing what scientists can decipher from the clues inadvertently left behind in our ancient relatives’ bodily gunks and waste.

Gut bacteria: the inside story

What is a balanced diet, anyway?