Virus variants are like a ‘typo’ in the genetic code. Image adapted from: Johnny Briggs/Unsplash; CC0

Breaking the cycle of viral mutations

COVID-19 vaccines and variants: how do they work?

Alpha, gamma, delta, omicron: what do they mean? The letters of the Greek alphabet are used in a range of different contexts, from history and linguistics through to science and mathematics, but they are also used to describe something that increasingly makes news headlines: new variants of SARS-CoV-2, the virus that causes COVID-19.

So what does it mean when scientists talk about a new ‘variant’ of a virus? Why are some variants more concerning than others, and what does that mean for COVID-19 vaccines?

How do variants arise?

A virus cannot reproduce on its own: it needs to infect a host so that reproduction can take place inside that host’s cells. Once a virus has made its way into a cell, it makes copies of its genetic material. This reproduction is performed by molecular machinery that generally does a good job at making sure every letter in the code is copied accurately. But, just as errors can happen in the machinery of a factory floor, mistakes can happen in copying the virus' genome.

Coronaviruses have a basic proof-reading capability that does a ‘quality assurance’ check of any transcribed genetic material. While this gives the virus a chance to fix errors, it’s not perfect.

If a mistake makes it through the proof-reading stage, it will then be copied into the genome of all future viruses that are copied from it (unless there’s another future mutation that reverses the error).

These mistakes can often cause problems for the virus. Any error introduced that interferes with the ability of the virus to assemble properly, that prevents infection of another cell, or even breaks the machinery of replication described above, will block virus replication. As a result, that genetic change won’t be passed on to future generations—the mutant simply dies out. But if the mutation doesn’t cause a critical problem and the mutated virus survives successfully, it can become a variant.

What causes a variant to become ‘successful’?

A ‘successful’ virus is good at infecting people and being passed on. This doesn’t mean it necessarily makes people sicker.

If there is a mutation that makes it more infectious, but people don’t feel very sick, the virus may spread faster in the community as fewer people realise that they’re unwell and might not get tested or self-isolate.

All these mutations are also valuable for contact tracers to be confident that they have found all the infected people in the community.

What makes some variants worse than others?

Increasing the severity of the illness

Infected people may be more likely to develop serious complications such as pneumonia or, in very severe cases, the virus could prove fatal. People with more severe symptoms are also likely to cough more, potentially spreading more of the virus into their surroundings.

Changing the range of people who are infected by the virus

Early variants mainly affected the older population, but variants like Omicron are more infectious in young children, increasing the spread of the disease since this sector of the community weren’t yet exposed to the virus or vaccinated.

As an example, if a virus is more stable, it can survive for a longer time while in the air or on surfaces, increasing opportunities for infection. It can also be more infectious if it becomes more effective at targeting and infecting host cells.

This means that even if people have already been vaccinated or exposed to the virus previously and developed protective antibodies against it, their protective immune response would not work against a new variant.

Will our vaccines still be effective?

This all depends on the variant, where the mutation has occurred, and how the vaccine works.

If new variants end up substantially changing the way the virus appears to the immune system, there’s a good chance that new versions of current vaccines will need to be developed.

Can we do anything about these variants?

Rapid genetic sequencing technologies have enabled far more detailed monitoring of changes in the virus than were possible in the past. By carefully tracking the changes across different variants, we can gain a better understanding of the geographical locations of the people carrying the virus. This helps health authorities to determine what kinds of actions will be required to limit its future spread. 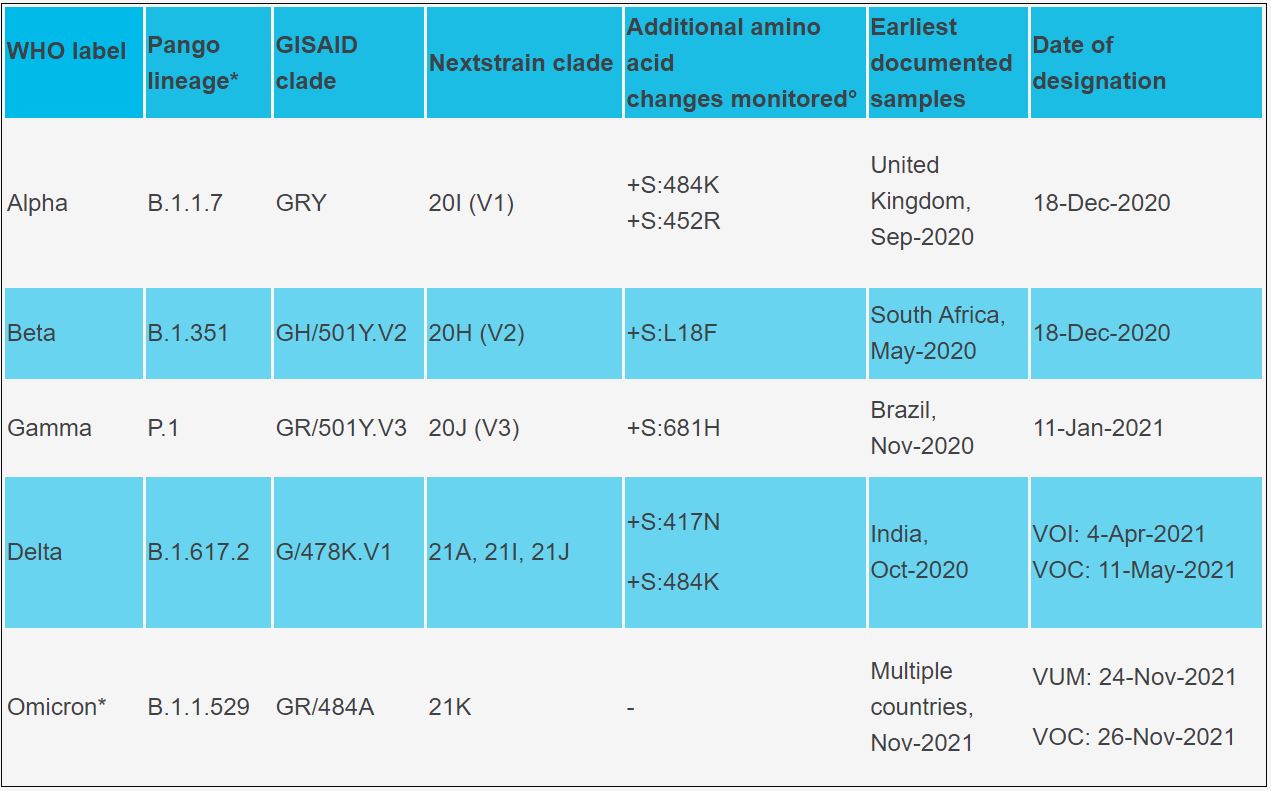 There are two main systems in place for naming SARS-CoV-2 variants: more detailed and sophisticated systems for health researchers to map out how the virus evolves and changes over time, and a simpler system for health authorities to communicate with the public about groups of variants that are essentially the same. Here are the WHO ‘Variants of concern’ as of November 2021. Source: World Health Organization

The most effective and the simplest way to prevent the increase in the number of variants is to reduce the opportunity the virus has for mutation. Vaccination does this by blocking it from replicating in our cells. By decreasing the rate of infection (and therefore replication), there are less opportunities for it to mutate.

By breaking the cycle of viral infection, replication and spread, we can reduce the number of variants that develop and extend the usefulness of the immunity derived from the currently available vaccines.

The faster the global community can establish immunity to SARS-CoV-2, the easier it will be to limit the emergence and impact of new variants. It’s a race between our global public health and viral mutation—a race that vaccination can help us win.