Noise pollution can affect our physical and mental health in many ways.

Pardon? Huh? Can you repeat that, please? Noise is an inescapable part of modern life. Traffic on the road, low-flying aircraft, construction, machines, barking dogs, lawnmowers and people talking on their phones are just some of the noises polluting our cities, towns, homes and workplaces.

But what actually is noise pollution? Is it just a nuisance, or can excessive noise have a negative physical and psychological impact on us?

Close your eyes for a moment and listen to the world around you. If you’re outside, you can likely hear a range of sounds―the wind, traffic or snippets of conversations. Even in a quiet building, you might be able to hear an air conditioner humming, phones ringing or a clock ticking.

Sound is an important part of everyday life: for communication, for enjoyment or for alerting us to danger. But in some situations a sound can distract us, break our concentration or, if it’s very loud, even harm us. When this happens, the sound becomes unwanted noise, and it can negatively affect both our physical and mental health.

Noise can be defined as any unwanted or offensive sounds that unreasonably intrude into and disturb our daily lives. Noise originates in all sorts of ways and from a multitude of sources. It is now more widespread than ever before and may continue to increase due to population growth, urbanisation and the increasing use of powerful, varied and mobile sources of technology ranging from mobile phones to leaf blowers. 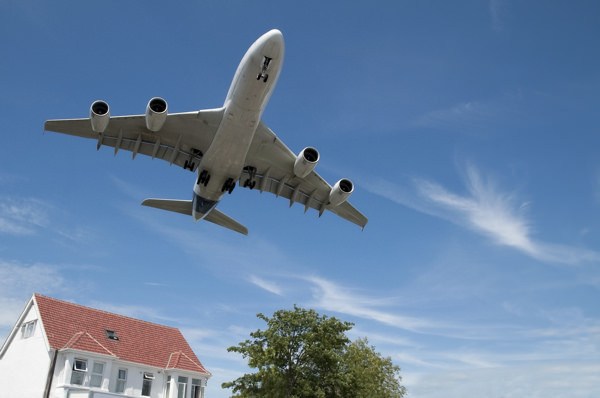 Sound is created when a vibrating or aerodynamic source causes waves of acoustic energy to travel through the air. The sound pressure waves move out from the source and become weaker the further they travel. The waves may be reflected or scattered by objects, so the sound reaching the ear may be different from the sound originally generated.

Sounds can be characterised by their frequency GLOSSARY frequencythe rate per second of a vibration constituting a wave, either in a material (as in sound waves), or in an electromagnetic field (as in radio waves and light) (or pitch) and intensity (or loudness). The vibrations producing the sound are cyclical and are measured in hertz (Hz), which give the number of cycles that occur per second. An adult with good hearing can hear frequencies in the range 20 to 15,000 Hz, while children may hear frequencies above 20,000 Hz.

The sound pressure level is measured in decibels (dB). A whisper is approximately 30 dB, normal conversation about 60 dB, a lawnmower around 90 dB and a gunshot upwards of 140 dB. Obviously, distance affects the intensity of sound, so the above ratings are taken while standing close to the source of the sound.

Most scientists agree that exposure to sound levels less than 70 dB does not cause hearing damage, regardless of the duration of exposure. However, exposure for more than eight hours to sound levels in excess of 85 dB―which is roughly equivalent to the noise of a heavy truck on a busy road―is potentially hazardous. When sounds increase above 85 dB, damage is contingent on sound pressure and duration of exposure.

Use the slider below to increase the noise exposure level or select an example sound from the drop down to find out the maximum exposure level before permanent damage.

SAFE FOR ALL DAY EXPOSURE

The correspondence between decibel GLOSSARY decibela unit for measuring how loud a sound is levels and perceived loudness is actually quite complex. Zero decibels is the quietest sound a healthy human ear can detect. From this base, each increase of 3 dB represents a doubling of the acoustic energy involved. The decibel scale is logarithmic, meaning that each 10 dB difference represents a tenfold increase in intensity.

Noise pollution can be more than just annoying. Exposure to prolonged or excessive noise has been shown to cause a range of health problems ranging from stress, poor concentration, productivity losses in the workplace, communication difficulties and fatigue from lack of sleep, to more serious issues such as cardiovascular disease, cognitive impairment, tinnitus GLOSSARY tinnitusringing or buzzing in the ears and hearing loss.

It might be tempting to think that noise isn’t a serious health issue, after all, it’s just noise, it won’t kill us … right? Well, maybe. In 2011 the World Health Organization (WHO) released a report titled ‘Burden of disease from environmental noise’. This study collated data from various large-scale epidemiological studies of environmental noise in Western Europe, collected over a 10-year period.

The studies analysed environmental noise from planes, trains and vehicles, as well as other city sources, and then looked at links to health conditions such as cardiovascular disease, sleep disturbance, tinnitus, cognitive impairment in children, and annoyance. The WHO team used the information to calculate the disability-adjusted life-years or DALYs—basically the healthy years of life―lost to ‘unwanted’ human-induced dissonance. Their results might surprise you.

They found that at least one million healthy years of life (yes, one million) are lost each year in Europe alone due to noise pollution (and this figure does not include noise from industrial workplaces). The authors concluded that ‘there is overwhelming evidence that exposure to environmental noise has adverse effects on the health of the population’ and ranked traffic noise second among environmental threats to public health (the first being air pollution). The authors also noted that while other forms of pollution are decreasing, noise pollution is increasing.

Source: WHO, Burden of Disease from Environmental Noise report, 2011.

Interestingly, it may be the sounds we aren’t even aware we’re hearing that are affecting us the most, in particular, those we ‘hear’ when we’re asleep. The human ear is extremely sensitive, and it never rests. So even when you sleep, your ears are working, picking up and transmitting sounds which are filtered and interpreted by different parts of the brain. It’s a permanently open auditory channel. So although you may not be aware of it, background noises of traffic, aircraft, or music coming from a neighbour are still being processed, and your body is reacting to them in different ways.

The most obvious is interrupted sleep, with its flow-on effects of tiredness, impaired memory and creativity, impaired judgement and weakened psychomotor skills. Research has shown that people living near airports or busy roads have a higher incidence of headaches, take more sleeping pills and sedatives, are more prone to minor accidents, and are more likely to seek psychiatric treatment.

But there is another, more serious outcome. Even if you don’t wake up, it appears that continual noise sets off the body’s acute stress response, which raises blood pressure and heart rate, potentially mobilising a state of hyperarousal. It is this response that can lead to cardiovascular disease and other health issues. A study undertaken by Dr Orfeu Buxton, a sleep expert at Harvard University, monitored the brain activity of healthy volunteers, who were played 10-second sound clips of different types of noise as they slept. The brainwaves of volunteers were found to spike in jagged, wake-like patterns of neural activity when each of the clips was played. This particular study was focusing on noises heard in a hospital environment—including talking, phones ringing, doors closing, machinery, toilets flushing, and city traffic, among others—but many of the sounds tested are ones we would also hear in an urban environment.

So we know that continual background noise can negatively affect our health, but other noises are far less subtle—and just as damaging.

Extended exposure to loud noise in workplaces such as construction sites or manufacturing plants can lead to temporary or permanent hearing damage. This is preventable if correct safety measures are taken (such as wearing earplugs or earmuffs). But a report published by Noise and Health in 2013 noted that 20.1 per cent of Australian workers undertake their jobs in environments where noise levels are higher than the recommended safe limit. The National Code of Practice for Noise Management and Protection of Hearing at Work specifies the maximum exposure levels (those experienced at the worker’s ear) for noise in the workplace. Employers must do as much as they can to reduce noise in the workplace, as well as provide their workers with adequate hearing protection.

We should also make a quick mention here of ‘leisure exposure’ to loud noises, such as at music concerts or, more commonly, from personal music devices such as iPods, MP3 players and phones. These devices often deliver very loud levels of sound directly into the ear canal. It may be music you want to listen to (and therefore not classified as ‘noise’—at least by you), but by turning it up loud you risk immediate or long-term hearing damage—the same effect as unwanted loud noise on your hearing. To protect your hearing, experts recommend that these devices should be used for no more than one hour per day, at a volume level of no more than 60 per cent.

There is no single government authority in Australia with overall responsibility for controlling or reducing environmental noise pollution. The Commonwealth Government takes responsibility for areas such as aircraft noise and emission standards for new motor vehicles, while each state and territory manages its own noise regulations. Environmental noise limits are applied to industry, which is required to monitor its noise levels to demonstrate that compliance limits are not being exceeded.

At a local level, neighbourhood and recreational noise issues are usually the domain of the police and local councils. Individuals can help create a more peaceful and pleasant urban environment by being considerate and respectful of their neighbours, and being aware of the sounds they are generating within their own home—which their neighbours may consider to be noise!

While tougher regulations are one way to combat noise pollution, smarter urban planning and improved building design will also help to create a quieter environment.  Steps that can be taken include:

Careful design within a building can also reduce the effects of noise pollution. For example, if the front of a building is exposed to traffic noise, it makes sense to locate bedrooms at the rear. A garage between the house and the street can provide an additional noise barrier.

Noise inside a building can be reduced if both the external and internal walls have high sound reduction. Guidelines for the sound insulation and acoustic properties of walls between adjoining units in multi-residential buildings are set out in the National Construction Code (NCC). Heavy, dense materials such as masonry or brick walls are better for sound reduction, but there are also lightweight solutions. For example, interior walls that have layers of plasterboard with sound-control material in the cavity can be very effective in reducing noise.

Windows and doors are often the weakest link in sound insulation. Double glazing is particularly effective for windows, while window systems with laminated glass that seal well when closed can reduce the need for separate frames. Solid-core doors are best, particularly for those that open onto external areas. All gaps and openings around both doors and windows should be well sealed—even the smallest openings can leak significant amounts of noise.

Sound is an important and valuable part of everyday life. But when sound becomes noise, it can negatively affect our mental and physical health. The realities of modern life mean the noises created in our world are not going to suddenly fall silent. Instead, we need to recognise that noise pollution is a serious health concern worthy of our attention, and find realistic and sustainable ways to manage and reduce it.