The secret world of your microbiome

You’re probably familiar with ecosystems like oceans and rainforests, but have you ever pictured your gastrointestinal tract (aka the gut) as a complex ecosystem of its own? Your gut is home to trillions of microbes—so many that over half of the cells in your gut aren’t human! This complex ecosystem is known as the microbiome and includes bacteria, yeasts (members of the fungus family) and viruses.

The microbes in our gut help digest the food we eat and ensure that nutrients are absorbed and processed. Beyond digestion, our microbiome is involved in many other crucial processes related to metabolism, body weight and immune regulation, as well as brain function and mood.

Over the last two decades, research in this field has exploded. Read on to find out more about the secret world of your microbiome, how scientists think gut health and mental health are linked, and what to eat when you’re suffering from gut distress.

What is a healthy gut?

Each person’s microbiome is different. Not only is it affected by your diet, it’s also influenced by where you live, who you live with, what you touch and even how you were born. In adulthood, our microbiome is relatively stable, but it can change by drastically altering your diet, during periods of illness, or with antibiotic use.

There’s no blueprint for the ideal healthy microbiome, but research suggests that when it comes to gut bacteria, diversity is better. Having diverse types of bacteria living in the gut boosts immunity by providing lots of contenders to fight potential infections. Lower gut diversity has been observed in people with various health conditions, including obesity, asthma and allergies, autoimmune disorders such as rheumatoid arthritis and diabetes, and some mental illnesses. Studies have also shown that gut diversity in some Western populations is lower than in groups with eating patterns that resemble a pre-industrial diet. Processed foods and reduced fibre intake are strongly suspected as the main causes of this decrease in diversity.

You can boost the diversity of your microbiome by eating a healthy diet, including foods that are naturally rich in dietary fibres, probiotics and prebiotics. Prebiotics are types of dietary fibre that feed your gut bacteria and are found in a range of plant foods: vegetables such as artichokes, asparagus, onion, garlic, leeks and mushrooms; legumes such as chickpeas and kidney beans; grains such as rye, wheat and barley; and fruits, particularly apples, berries, pears, persimmons and watermelon. Eating prebiotics can enhance immunity and promote the absorption of minerals, as well as produce anti-inflammatory compounds.

Probiotics are live bacteria found in fermented foods, such as yoghurt, kefir, miso and sauerkraut. They’re believed to boost healthy bacterial strains in the gut, although more research is needed to see which probiotics are helpful, and how much would be beneficial. This reflects the multiple levels of the unknown in microbiome research.

A typical daily probiotic capsule could include around 10 billion colony-forming units (CFUs) of probiotic bacterial strains, as can one serving of a commercial yoghurt (although you won’t often read this on the label). Many of these bacterial strains are included because they are easy to cultivate, not because they are adapted to the human gut or known to improve health. Studies testing probiotics as preventatives and treatments for a variety of gastrointestinal and other health conditions often show inconclusive results. Probiotics show the most promise for conditions such as antibiotic-associated diarrhoea and inflammatory bowel disease in dosages of 10–20 billion CFUs per day for adults (5–10 billion for children).

The gut is often described as a ‘second brain’. In fact, the walls of our gut are lined with about 10 million neurons. Known as the enteric nervous system, our gut can work independently of the central nervous system, the processing centre that includes the brain and spinal cord. That means your brain doesn’t have to get involved with the messy daily grind of digestion and excretion. Our two ‘brains’ communicate via the vagus nerve, one of the 12 major nerves that link the body to the brain. Messages from the gut to the brain (and vice versa) travel through this information superhighway, and research is ongoing into this gut–brain connection.

A growing body of research suggests that our microbes also communicate with our brain. Gut bacteria could influence brain chemistry through various pathways. Gut microbes produce neurotransmitters—chemicals such as serotonin, dopamine and GABA that transmit messages to the brain. Our microbiome also influences the immune system, which itself impacts mood and behaviour. 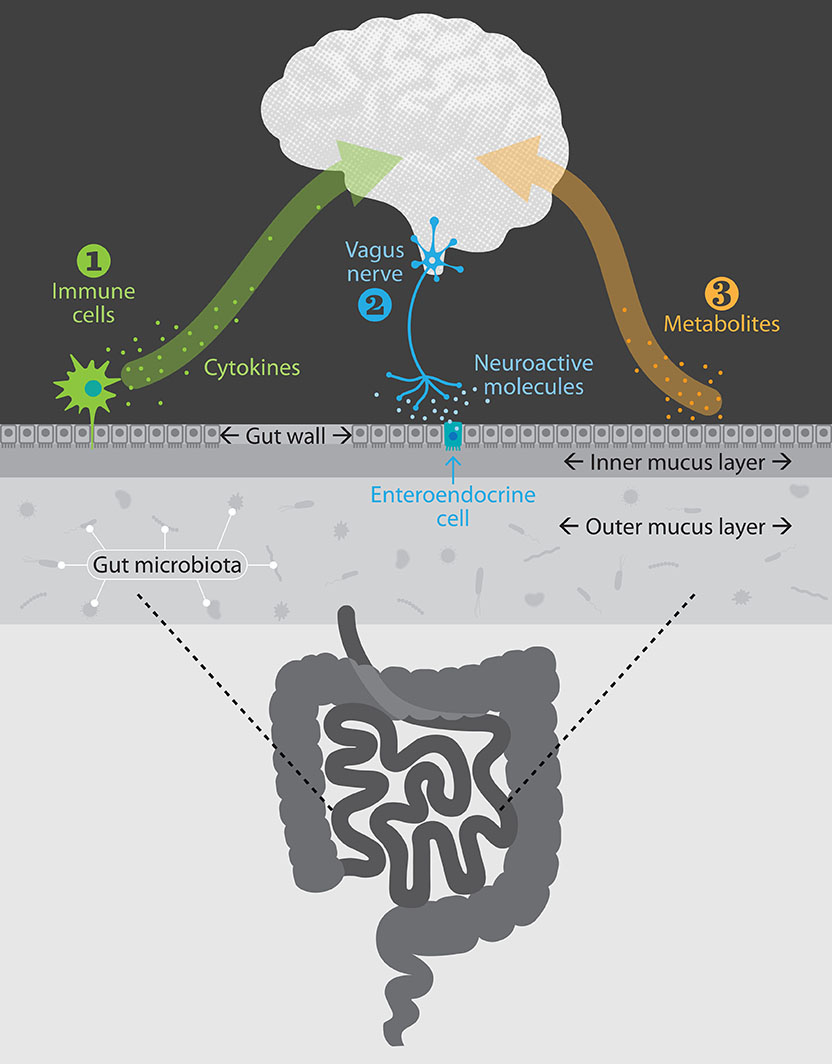 1. Microbes interact with immune cells in the gut. This prompts the cells to make cytokines (proteins used in cell signalling) that circulate to the brain through the bloodstream.

2. Microbes also interact with gut cells called enteroendocrine cells that produce neuroactive molecules. These molecules interact with the vagus nerve, which sends signals to the brain.

3. Microbes produce neurotransmitters and chemical compounds called metabolites (such as butyrate) that circulate to the brain. If they are small enough, they can cross the blood–brain barrier, while others alter cell activity at the barrier.

A study on rodents showed that changing their gut microbiome changed the way their brains take up neurotransmitters. After their gut bacteria was altered, the mice behaved differently in response to stress. This wasn’t the case when their vagus nerve was cut, which suggests that the microbes use the nerve to communicate with the brain.

Human research examining links between the gut microbiome and the brain is still in its early days, but could lead to therapeutic benefits later down the track. One of the most well-known studies showed that women who ate probiotic yoghurt for one month displayed changed activity in brain regions that control the processing of emotion and sensation. However, scientists caution that a lot more research is required before they can begin developing ‘psychobiotic’ treatments (pre- or probiotics that treat mental health issues).

Can what you eat affect your mental health?

Nutritional psychiatry is an emerging field which examines how what you eat affects your microbiome—and your mental health. Preventing depression is particularly important, as the World Health Organization has found that depression is the leading cause of disability worldwide. Studies across the world have observed that eating a better quality diet is associated with a reduced risk of depression. Several studies have also shown the benefits of ‘good mood foods’ in lowering the risk of depression. These include foods high in polyphenols, a group of micronutrients with prebiotic and antioxidant properties, such as oranges, berries and cocoa products—hello, chocolate!

In a study called the SMILES trial, researchers at the Food and Mood Centre at Deakin University have found that improving your diet can go a long way to reducing symptoms of depression. They’re also currently running the Gut Feelings Trial to find out how eating foods high in pre- and probiotics impacts your mood.

The most important message is to avoid processed foods and make sure the majority of your diet is made up of nutrient-dense ‘good mood foods’ such as fruits, vegetables, legumes, wholegrains and raw nuts; fish and lean meats; and healthy fats such as olive oil.

IBS: when even fruits and veggies cause gut distress

While research is growing into the role of healthy foods in preventing illness, scientists are also hard at work treating gut disorders such as irritable bowel syndrome (IBS)—not to be confused with inflammatory bowel disease (IBD) conditions that cause inflammation and tissue damage.

For IBS sufferers, symptoms such as abdominal pain, bloating, constipation, diarrhoea and excessive gas can be an unwelcome part of everyday life. IBS is described as a functional gastrointestinal disorder, which means that there are no obvious signs of abnormalities in the patient’s gut. According to the Gastroenterological Society of Australia, IBS is a very common disorder (PDF) affecting around one in five Australians.

Researchers have several theories about why IBS occurs, including low-grade inflammation and imbalances in the gut microbiome. Finding an effective treatment can be challenging, although several medications and psychological therapies have been shown to reduce symptoms. However, the clear link between diet and IBS symptoms has led researchers to develop a dietary treatment.

About 60 per cent of IBS patients report that consuming certain foods trigger or worsen their symptoms, according to Monash University. Over the last 50 years, studies have pointed to foods which contain short-chain carbohydrates as the culprits. Short-chain carbs aren’t well-absorbed in the small intestine, so they rapidly ferment, leading to increased gas production that can contribute to IBS symptoms. However, it wasn’t until 2004 that a group of Monash researchers developed a collective term for these foods: FODMAPs.

FODMAP stands for Fermentable Oligo- Di- and Mono-saccharides And Polyols. FODMAPs are found in lots of foods; particularly those high in fructose (such as pears and apples), sugar polyols (stone fruits, artificial sweeteners), lactose (some dairy products), fructans and fructo-oligosaccharides (rye, artichoke, garlic, onions) and galacto-oligosaccharides (legumes and nuts).

The low FODMAP diet was developed by Monash researchers and is designed to be followed with the help of a dietician. Patients initially follow a strict diet that’s low in FODMAPs for 2–6 weeks, or until their symptoms resolve. They’re then encouraged to reintroduce foods higher in FODMAPs to see how they react. Numerous studies have shown that the diet effectively treats IBS symptoms in the short and long term.

Patients shouldn’t have to avoid all FODMAPs for life, which is great because many FODMAPs are healthy and promote the growth of good gut bacteria. Each patient responds to FODMAPs differently, so specialist dieticians can be very helpful in reintroducing FODMAPs in a strategic way. Researchers are continuing to study the diet, with the aim being for IBS patients to eat the least restrictive diet possible that allows them to stay symptom-free.

As our understanding of the microbiome grows, we can expect to discover more about the role of gut health and diet in preventing and treating health conditions.