Australia is facing a moment of truth.

Australia’s future depends on science. Here’s what our next government needs to do about it 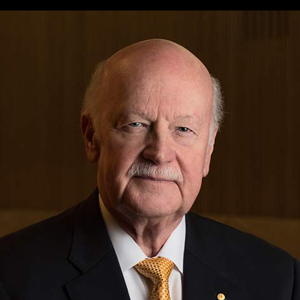 Author: Professor John Shine
President, Australian Academy of Science
Laboratory Head, Garvan Institute.
This article was first published in The Conversation on 11 May 2022.

The longer you live through a crisis, the less likely you are to fully appreciate that you’re in one. This is especially true if there is more than one crisis, and they overlap.

In Australia, we’ve experienced several in the past few years: bushfires and floods turbo-charged by climate change, and an enduring pandemic. These events have all taken place during my time as President of the Australian Academy of Science. As my term draws to a close, I’ve paused to reflect on how we’ve managed these overlapping events.

My observation is this: our natural human ability to absorb and respond to the shock and stress of a crisis, while usually a strength, is not serving us well when it comes to complex and sustained crises. Put differently, we appear to have become complacent. Perhaps a better explanation is that we have ‘crisis fatigue’.

How else to explain the lack of discussion about the fundamental role of science during this election campaign?

Our future depends on science

There has been no serious national dialogue concerning climate change and very little talk about the pandemic, which is not over nor likely to be our last. Next to nothing has been said of the role of science in supporting our defence and national security and its role in equipping the public with essential life skills.

Science is about far more than crisis management. It’s about how we understand our present and future, and realise our potential as people.

Both major parties talk about a stronger and better future, with a growing economy and more jobs. But what should this look like?

A long-term investment strategy for science

A strong science sector relies on long-term, consistent and coherent government funding to support discovery and innovation. In investment terms, this is ‘patient capital’ which doesn’t expect quick or easy returns.

This patience can eventually have huge rewards. For example, long-term funding allowed the fundamental understanding of RNA technologies which meant scientists developed a COVID-19 vaccine in less than a year.

However, Australia’s investment in research and development as a percentage of GDP has declined over the past decade. 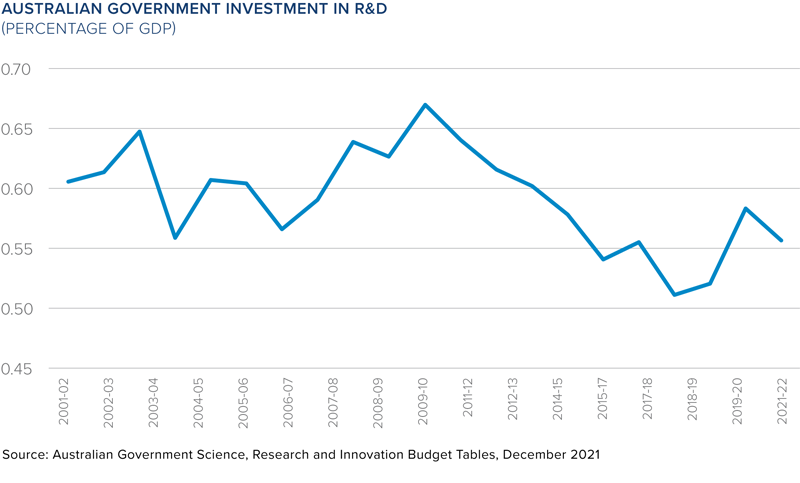 Australia’s investment in research and development (R&D) as a proportion of gross domestic product (GDP) has fallen over the past decade. Source

In 2021 the Australian government’s investment was 0.56% of GDP, behind nations such as Germany, Japan, the United Kingdom, France and the United States. Research shows that if Australia lifts investment in university R&D by just 1%, the economy would be $24 billion bigger over ten years.

Fiscal and budget policy are complex matters, and not all politicians can be experts. That’s why parliament has a Parliamentary Budget Office to provide independent, non-partisan analysis.

Matters of science are complex too, and becoming more so every day. To make good decisions, our parliament, justice system and public square need ready access to the best available science.

So why doesn’t Australia have a Parliamentary Science Office?

In our democracy, facts should be the core of parliamentary debate. A Parliamentary Science Office should be established by the federal parliament to offer science-based advice and evidence to all parliamentarians. #ausvotes #GetTheScience https://t.co/tH8QmkeyJk

Such an office, modelled on the United Kingdom’s Parliamentary Office of Science and Technology, would provide impartial scientific advice, evidence and data to all parliamentarians.

Our politicians must be better equipped to distinguish between evidence and fiction, while understanding how science works and how our knowledge base rapidly evolves.

In 2019–20, Industry Innovation and Science Australia reported that the Australian government’s innovation, science and research investment was split across 202 programs and 13 portfolios.

This fragmentation is indefensible, made worse because few funding programs, if any, provide enough money to cover the actual cost of research. This means researchers have to secure multiple grants for work that a single grant would cover in a fit-for-purpose system.

The next government must urgently conduct a whole-of-government review to identify the best operation, funding arrangements and architecture of the Australian science and research system to provide for a secure foundation for at least the next 20 years.

Applying the knowledge gained from fundamental science underpins the long-term health, security and prosperity of Australians. Australia needs a sustained and secure translation fund to turn science into innovative technologies and other solutions to the challenges we face in an uncertain and rapidly changing world.

Australia must also introduce a coherent strategy to develop education and training programs along with career incentives to deliver the highly skilled and knowledgeable workforce we need to seize and grow the opportunities offered by a strong science base.

A moment of truth

As election day approaches, Australia faces a moment of truth. Science can grow the knowledge economy to secure our future economic and social prosperity and prepare us to deal with the known and unknown events that the 21st century will present.

But for that to happen, the next government must prioritise and invest in science and ensure decisions are informed by evidence. At a minimum, anyone wanting to lead our nation should also lay out their vision for science at the final leaders’ debate this Wednesday evening [11 May 2022].