A breakdown of science and research funding by sector

How is science funded in Australia?

Science is central to the pursuit of our national economic, environmental and social objectives, and application of scientific knowledge helps to satisfy basic human needs and improve living standards, such as finding cures for diseases and inventing cleaner forms of energy.

The Australian Academy of Science has consistently argued that Australia needs to lift its investment in research and development, up to 3 per cent of GDP, from 1.79 per cent in 2018. Understanding who pays for science now is crucial for arguing why we should increase our investment, and what we would do with it.

Fields of Research (FoR) codes—The Australian and New Zealand Standard Research Classification (ANZSRC) refers to a set of three related classifications for measuring and analysing R&D. FoR classification is one of these and allows R&D activity to be categorised according to the field of research, based on the methodology used in the research and development. The Australian Bureau of Statistics (ABS) also provides definitions for some areas of study, which include:

Gross domestic product (GDP)—the monetary value of all the finished goods and services in a country. GDP is used to estimate the size and growth rate of an economy.

Gross expenditure—the combined amount of all expenditure, including public and private spend.

Research and development (R&D)—as per the ABS, R&D is defined per the Organisation for Economic Co-operation and Development (OECD) standard as ‘creative and systematic work undertaken to increase the stock of knowledge—including knowledge of humankind, culture and society—and to devise new applications of available knowledge’.

Who pays for scientific research in Australia?

Scientists rely on funding for every stage of the scientific process: for the people (including researchers and support staff), equipment, infrastructure, facilities and to publish and share their work with others. The research and development (R&D) process requires significant investment, and universities, governments, businesses, not-for-profit organisations and individuals all contribute in Australia. 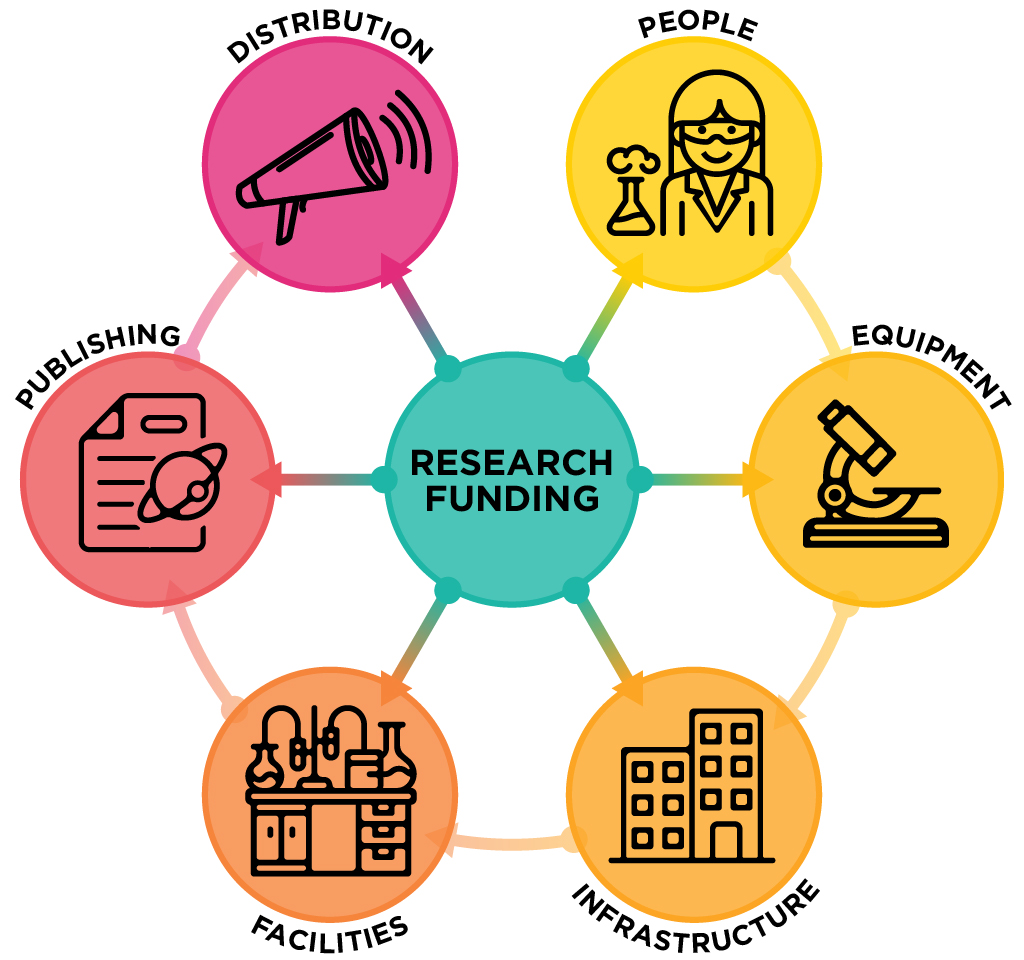 Funding is required for every stage of the research pipeline: for the people, equipment, infrastructure, facilities and to publish and share findings.

Universities use various sources to fund their R&D activities, including government grants, base funding (from government support for student enrolment) and other discretionary income. University R&D activities span the full spectrum of research, from so-called fundamental research (the discovery of new knowledge or the reinterpretation of existing knowledge) through to research at the applied end of the spectrum.

Businesses invest in R&D to create new products and services and improve the products and services they currently offer. An example is mobile phone manufacturers investing in research to develop types of glass to create better phone screens. Research of this type in Australia might be done in-house by businesses, or in partnership with universities or CSIRO and other research agencies.

Governments invest in R&D because it is in the public’s interest for them to do so. They invest directly by funding universities, research organisations (like CSIRO, Rural R&D Corporations or Defence Science and Technology) or via competitive research grant schemes (such as those distributed through the Australian Research Council and the National Health and Medical Research Council). A major function of government support for R&D activities is to secure an intellectual base on which to build a safe, prosperous and socially rich community. Australians know what Australia needs and local talent can be recruited to meet the challenges we face, as long as we have it. Where would we be with our coronavirus responses if we relied exclusively on international experts? Equally, where would we be if we had no local capacity to manufacture vaccines?

However, funding from government does not cover the full cost of research or research infrastructure. This leaves a gap—estimated in 2018 to be approximately $4.6 billion. As a result, universities must attract other sources of funding to close the gap. These can be via private funding from industry or philanthropy; however, most universities increasingly rely on earnings from international students to make up the shortfall. This is not sustainable as the impact of the pandemic has shown. Modelling from Universities Australia has predicted that the impact of COVID-19 on Australian universities will be a loss of $16 billion in revenue between 2020 and 2023.

The funding gap for supporting R&D activities has critical consequences for our national research capability. Not only does it impact on staff (both numbers and salaries), it also reduces our capacity to provide essential modern facilities such as equipment and buildings. Australian research slowly loses the scale and the capacity to serve the interests of the nation.

Philanthropists also fund research. In Australia it remains an important contribution but is small in scale and differs from business investment. Generally, the philanthropist does not own or profit directly from the outputs created, although they may specify the type of research that they want to support.

How much money is invested into R&D?

Governments in Australia directly spent $3.3 billion on R&D in 2017–18, with 63 per cent of this by Australian Government organisations (like CSIRO) and 37 per cent by state and territory governments.

The not-for-profit sector, mostly medical research institutes, is a smaller contributor to R&D, at $1 billion.

How much does Australia spend on science?

The amount spent on R&D in Australia is measured by the Australian Bureau of Statistics and is called gross expenditure on R&D (GERD). GERD measures expenditure in the business, government, university and not-for-profit sectors.

How gross expenditure on R&D (GERD) is calculated.

In 2017–18, Australia spent $33 billion on R&D. Over the last decade, the percentage of Australia’s gross domestic product (GDP) spent on R&D has fallen.

Business investment in R&D as a percentage of GDP is higher now than it was 20 years ago. However, it has fallen from its peak in 2008 to a level in 2018 (the latest figure available) that was only slightly larger than it was in 2004. Since 2000, university R&D expenditure has grown, while government expenditure on R&D has fallen from 0.35 per cent in 1996 to 0.17 per cent in 2018. Notably, the combined percentage of government and university expenditure is the same in 2018 as it was in 1994. The difference is that the government contribution has halved while universities have made up the difference, in part by using a proportion of the fees international students pay. It is not a sustainable model. 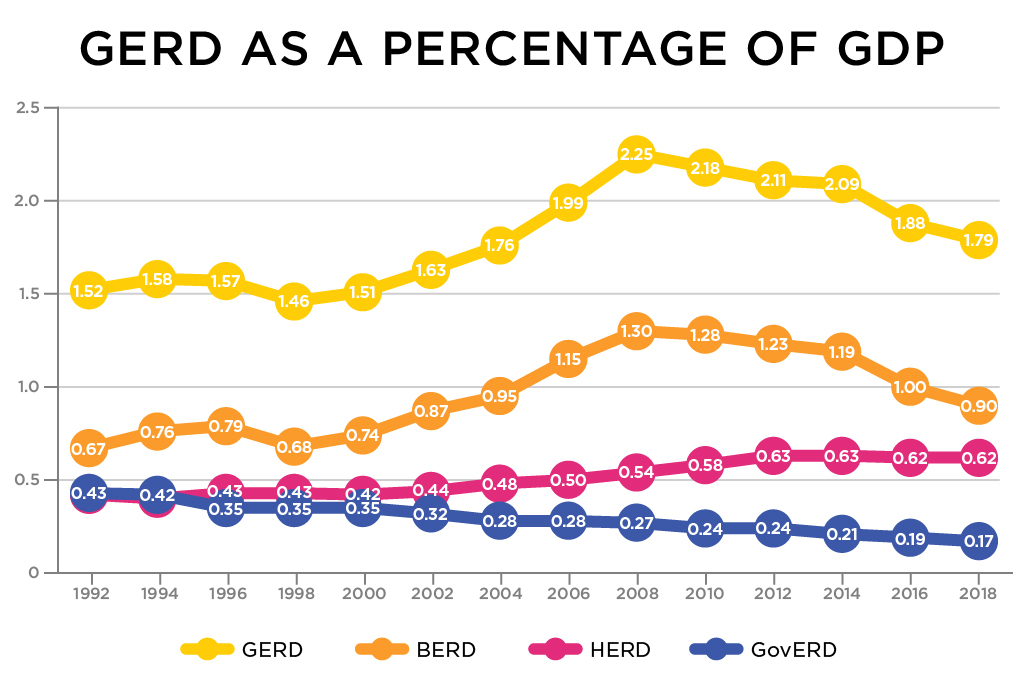 GERD expenditure on all R&D activities as a percentage of GDP is now lower than in 2006. Government R&D is the lowest on record.

R&D expenditure in Australia is dominated by research in the STEM (science, technology, engineering and mathematics) disciplines: 90 per cent in 2018, or 1.6 per cent of GDP. Again, it peaked in 2008 and has fallen every year since. 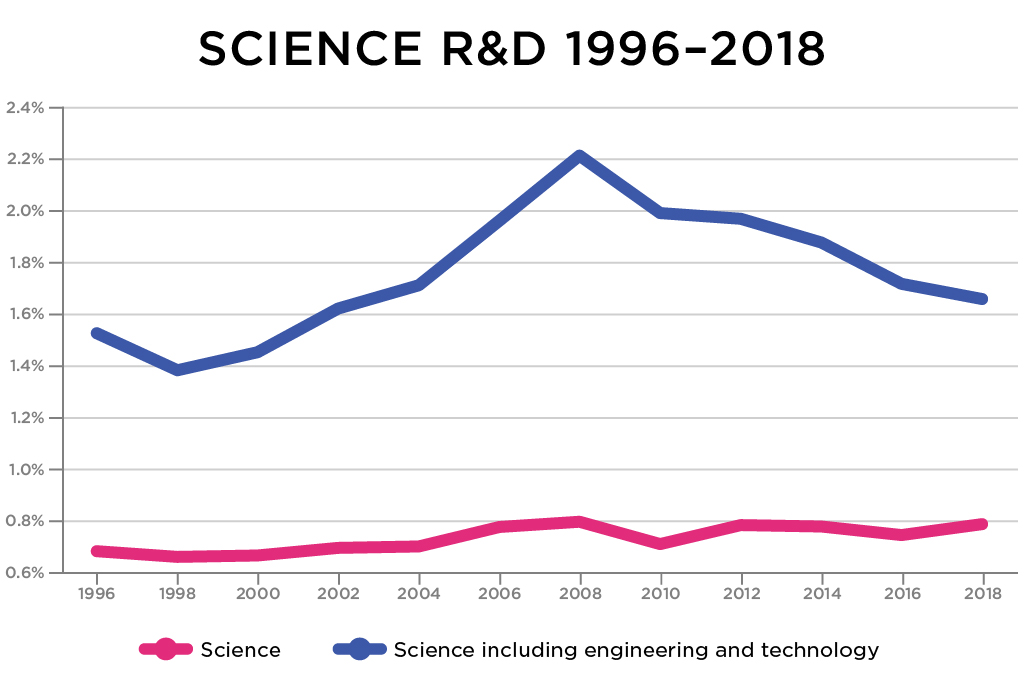 GERD expenditure on STEM R&D activities as a percentage of GDP has decreased over the last decade. 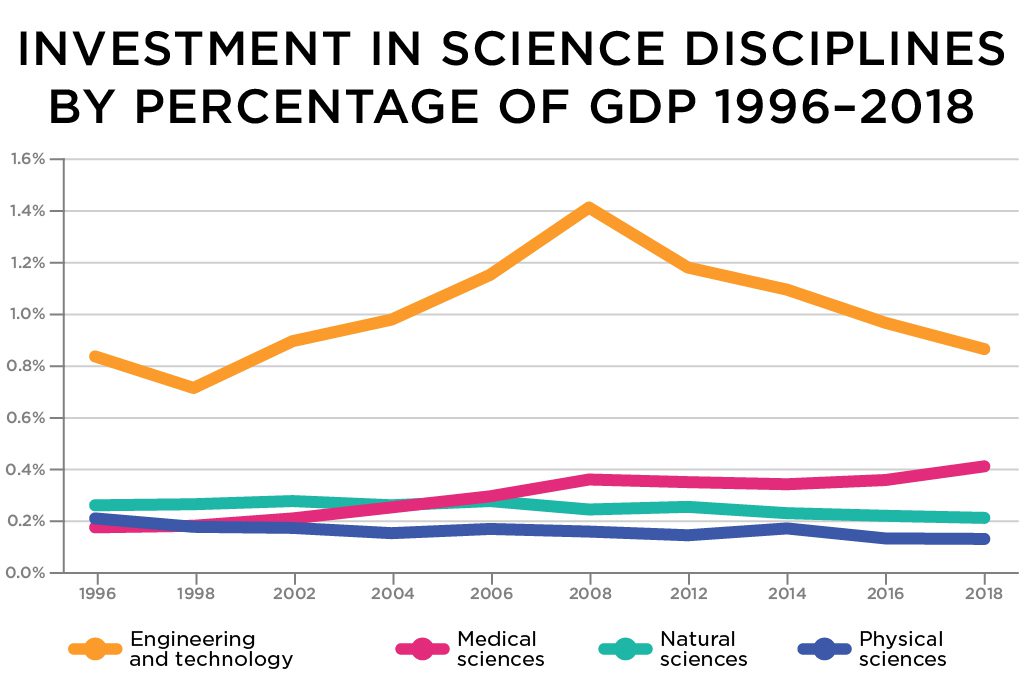 Distribution of R&D expenditure for different disciplines over time.

Where do scientists work?

Scientists and researchers work in a variety of settings including in business and as government scientists, academics, technicians or support staff.

Across Australia, on the latest available figures from 2017 to 20191, 178,434 full-time positions were funded in R&D: 42 per cent of these positions were in the private sector, 46 per cent in universities, 8 per cent in government and 4 per cent in medical research institutes and other not-for-profit bodies. 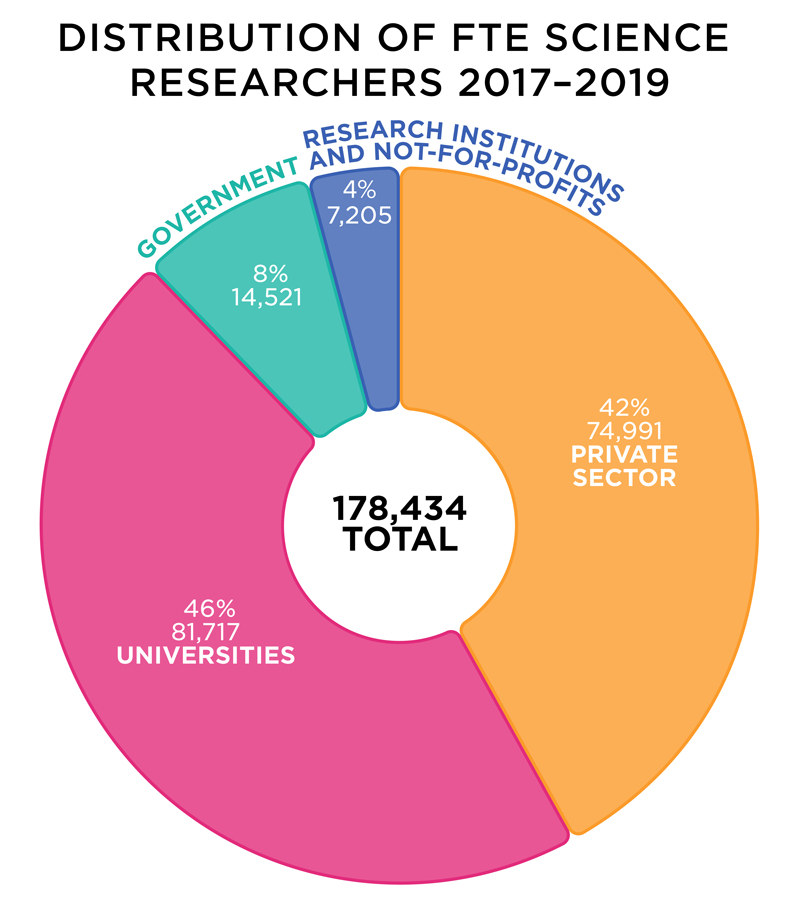 How is R&D funding split between different disciplines?

Different research sectors invest in different disciplines or topics of research, which is measured by applying fields of research (FoR) codes. Until recently there were 22 fields, from Division 01 Mathematical Sciences through to Division 22 Philosophy and Religious Studies. The FoR codes were updated in 2020 and now cover 23 recognised fields of research. 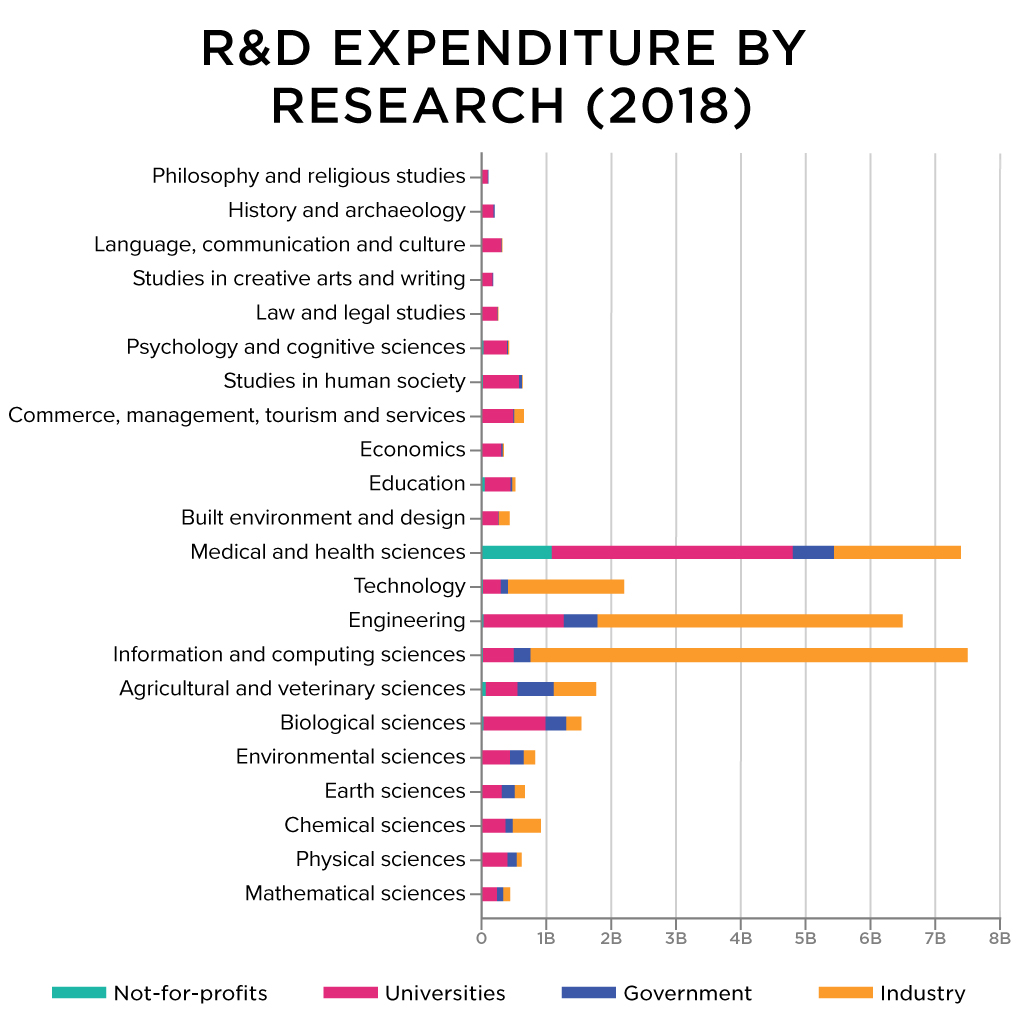 Distribution of R&D expenditure by different fields of research in 2018. 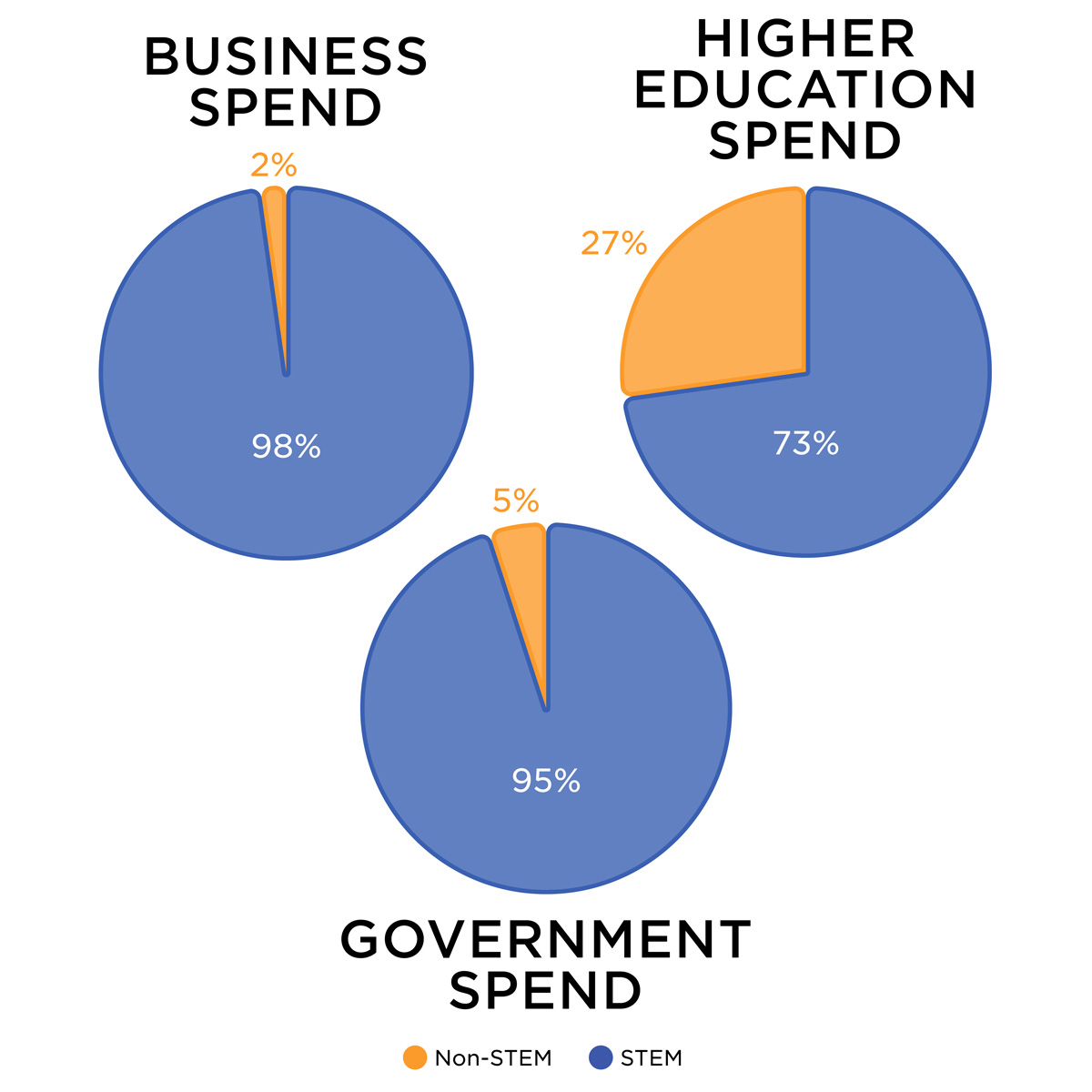 While universities increased R&D spending in STEM fields in the 10 years to 2008 by 75 per cent, the business sector only increased investment in these areas by 15 per cent. The 44 per cent reduction in engineering R&D from the business sector over the past decade goes some way towards explaining this, which may be related to the declining investment overall in mining and manufacturing.

Universities also have the highest expenditure for all research in fields that are not related to STEM, such as economics and law.

What does the future hold?

The impact of the COVID-19 pandemic on R&D activities in Australia is unknown. The risk is that the impact on university discretionary revenues, and business activity, could impede future growth in support for scientific research. The impact of that outcome on Australians and their way of life would be profound. Returning to an old, broken model of research support, with declining government investment, is no way to prepare for and safeguard the community from the vagaries of the future. We have to be better than that: planned, organised, strategic. It requires change, and that requires courage.

1 Sourced from ABS data on expenditure and human resources devoted to R&D by government and private non-profit organisations; higher education organisations; and businesses