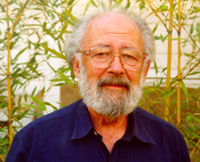 Professor Stephen Boyden was interviewed in 2003 for the Interviews with Australian scientists series. By viewing the interviews in this series, or reading the transcripts and extracts, your students can begin to appreciate Australia's contribution to the growth of scientific knowledge.

The following summary of Boyden's career sets the context for the extract chosen for these teachers notes. The extract discusses why he decided to initiate an undergraduate human sciences program at the Australian National University. Use the focus questions that accompany the extract to promote discussion among your students.

Stephen Boyden was born in London in 1925. He attended the Royal Veterinary College in London from 1942 to 1947 where he studied immunology and bacteriology. He attended Cambridge University and completed a PhD in 1951. During his doctoral studies, including one year spent at the Rockefeller Institute in New York, he investigated haemagglutination of red blood cells in relation to bacterial infection.

After working for a year at the Pasteur Institute in Paris on the interaction between cells and bacterial products, Boyden moved to Copenhagen to work at the Tuberculosis Immunisation Research Centre, established by the World Health Organization. He worked there from 1952 to 1960, researching the antigens of the tubercle bacillus.

He arrived in Australia in 1960 to become a Senior Research Fellow at the John Curtin School of Medical Research (JCSMR) of the Australian National University (ANU). From 1960 to 1965 his work was in the field of cell biology and immunology, particularly in the area of chemotaxis. After 1965 he began focusing on the interplay between the natural world and human society. In 1976 he moved to the Centre for Resource and Environmental Studies (CRES) at the ANU where he worked for the rest of his university career, researching human ecology and biohistory.

Boyden was the Director of ANU’s Hong Kong Human Ecology Program from 1972 to 1977, which resulted in the book The Ecology of a City and its People: The Case of Hong Kong, in 1981. He was a consultant to UNESCO’s Man in the Biosphere Program from 1972 to 1989. At ANU, he initiated the Human Sciences Program in 1972 and led the Fundamental Questions Program at CRES from 1988 to 1990. He retired in 1990 and remained at CRES as a Visiting Fellow.

In 1992 Boyden became a founding member of the Nature and Society Forum. This organisation is dedicated to improving society’s understanding of life processes and the place of humans in nature and how these relate to health and environmental issues facing people today.

He was elected a Fellow of the Australian Academy of Science in 1966.

In 1998 he was made a Member in the General Division of the Order of Australia (AM) for developing scientific ideas and for his scholarship in human ecology.

At about this time you got involved in setting up the undergraduate Human Sciences Program at ANU.

That’s right. It was about the same time as the Hong Kong project was getting going. As I have mentioned, I realised that the structure of the academic world didn’t acknowledge that human situations involve continual interplay of the different aspects of reality. The courses offered to the students at the undergraduate level contained nothing which focused on the interplay between cultural aspects and biophysical aspects of human situations. And so, although I was in the Institute of Advanced Studies at the time and therefore had no direct undergraduate responsibilities, I wrote to the Vice-Chancellor proposing a course – actually, a whole degree course, but I didn’t get it – looking at the interplay between the cultural and the biophysical aspects of the system in human history and also the present day. A committee was set up to discuss it, but there was a lot of opposition to the idea. It was seen by some people as a soft option, though it isn’t if you do it properly. It is much easier to be a good specialist than a good integrator.

Anyway, some people began to understand what I had in mind and we won the day: the Human Sciences Program came into existence. It was not a full degree program in its own right, but people could ‘major’ in human sciences. We had a second-year unit where the focus was on the ecology of the human species in the past and the present, but in terms of relationships – not only patterns of energy use and so on but also the cultural influences on those patterns. And then the third-year unit, on human adaptability, looked at the capacity for humans to adapt to new situations, both biologically and culturally.

We recognise the capacity of human culture to sometimes embrace quite nonsensical assumptions which lead in turn to nonsensical behaviours which can have very adverse effects on living systems, either around or within us. There are countless examples in history of this ‘cultural maladaptation’, where a culture develops a world view containing assumptions which result in maladaptive behaviour which then results in undesirable consequences in living systems. That is occurring even at the present time.

Fortunately, however, we have the potential, through our capacity for culture, to overcome these maladaptations. We used to call the exercise of this potential ‘cultural adaptation’, but that term has been used by anthropologists in a slightly different way. So we now talk about ‘cultural reform’. If society wakes up to the fact that there are undesirable consequences of certain human activities in the system, it can make use of improved understanding of the situation to introduce measures aimed at overcoming those undesirable consequences.

The pattern of cultural maladaptation followed by cultural reform is a very important area of study. We have put a lot of effort into it over the years, and it is extremely relevant to the understanding of our present, ecologically unsustainable, situation in society, and also of the inequities in human populations and so on. In other words, there are undesirable things happening now as a result of human activities, and the future wellbeing of humanity depends upon effective cultural reform. And we can learn a lot from those patterns in the past, in relation to the present.