There are many ways in which mathematics lies beneath the surface of tennis.

School of Mathematics and Statistics

The University of Western Australia

As the players emerge to the cheers of the crowd and stroll onto the court to confront each other—fated to meet by a tournament structure prepared weeks ago—commentators draw upon a wealth of statistics to discuss the upcoming match for the watching fans. Blisteringly fast serves turn into thrilling rallies where every motion of the ball is tracked in real time by analysing radar signals. After the tournament is over, the world rankings are adjusted.

How does knowledge of mathematics help us gain insight into the world of tennis?

Long before players set foot on the court, every match in their tournament needs to be scheduled. To decide how best to match up the players in the first round, the entrants to the tournament must first be seeded GLOSSARY seededA system to determine the order in which entrants are favoured to win a tournament, so they can be ‘planted’ into the appropriate tournament bracket. The 1st seed is the player deemed most likely to win, the 2nd seed is next-most likely to win, and so on, usually stopping at the 16th or 32nd seed. . The easiest way to seed the players is to look at their world rankings—but how are these determined in the first place?

How are the ranking points calculated? Each player’s best tournament results over the last 52 weeks are selected (though some important tournaments, such as the four Grand Slam tournaments, must be included in the calculation), and points are awarded for each tournament based on the type of tournament and how far the player progressed before being eliminated.

Once the players are ranked, seeding a tournament can just be a matter of listing the top 32 entrants in order of ATP or WTA rankings. This is how the Australian Open, French Open and US Open tournaments are seeded. Wimbledon, however, chooses to do things a little differently. Instead of using the ATP ranking points, they use their own modified points calculated using the formula:

As Wimbledon is played on grass courts, the formula is designed to give more weight to ranking points that players earned on grass courts. Interestingly, Wimbledon bases their seeding for the women’s tournament on the unmodified WTA rankings, in line with the other Grand Slams.

Once the top players have been seeded, there are two main considerations that determine how tennis tournaments are structured.

First, the number of matches needs to be kept to a manageable level. Grand Slam tournaments start with a field of 128 players. If we design a tournament in which every player plays a match against every other player, then every single player would have to play at least 127 matches throughout the tournament (exhausting!) and there would be at least 8,128 matches in total. The tournament would have to run over most of the year!

Can we do better? What is the fewest number of matches that we need in the tournament?

Can we design a tournament that determines a winner after precisely 127 matches? Yes, we can, and it’s surprisingly straightforward. We use what is called a ‘single-elimination’ tournament structure (or what mathematicians who study graph theory might call a ‘binary tree’).

In a single-elimination (or knockout) tournament, the winners of each round progress to the next round while the runners-up are immediately eliminated. In this simplified diagram (showing only 16 players), each circle represents a player; the line between players represent a match; and only the winner will advance to the next match.

This tournament features the mathematical process of exponential decay—half the players that start any given round are knocked out by the end of that round, which causes the number of players left in the tournament to drop off rapidly as the tournament progresses. The winner and runner-up of the whole tournament only need to play 7 matches, and every other player in the tournament players fewer matches. With the minimum number of 127 matches played, the Grand Slam tournaments can be held in a very reasonable timeframe of 2-3 weeks.

The second thing to consider is that, ideally, the tournament should become more difficult for the players as the rounds progress—players should be more likely to encounter higher-ranking players later in the tournament. This will naturally happen as stronger players triumph in their rounds, but we need to be careful in our tournament design: we want to make sure that the top seeds don’t meet each other (and knock each other out) at the start of the tournament, so we place the seeded players carefully in tournament brackets. The first and second seeds are placed at the very ends of the first round, like so:

The first and second seeded players are placed far from each other in the first round of a tournament.

This ensures that, if the first and second seeds win all of their matches, they can’t face each other until the finals. A similar idea is used to make sure the top 4 seeds can’t meet each other until the semi-finals—seeds 3 and 4 are placed (randomly) in the following two positions.

The third and fourth seeded players are placed to avoid early matches with each other (or with the first and second seeded players).

Click the player seed numbers to select match winners. Notice how the tournament structure prevents top-seeded players from facing each other until later matches.

Select a winner from the previous round

Moving from tournament organisation to analysis of the game itself, perhaps the most striking feature of tennis is its unique scoring system. It turns out that it’s not just a quirky flavour—the division of a match into points, games and sets actually impacts the final results in some unexpected ways.

One of the key features of the tennis scoring system is that, unlike sports such as cricket or football, not every point ultimately affects the outcome of the match. To see how this works, consider a match between Alice and Bob in which Alice is serving the first game of the first set. Alice wins the first 3 points, so at that stage the score is 40-0.

If Alice wins the next point, she wins the game, and the overall score for the match sits at 1-0.

But suppose Bob manages to score the next 2 points instead. The score sits at 40-30. Alice then wins the next point, she wins the game—and the overall score for the match again sits at 1-0. The same outcome occurs both times, regardless of whether or not Bob won his two points! Bob’s two points were effectively erased once Alice won the game, and have no influence whatsoever on the final outcome of the match.

This can lead to strange situations in which players can win more points than their opponents—or even more games—and yet still lose the match! This surprising result is closely related to a phenomenon in statistics called Simpson’s Paradox, where looking at data in greater detail can lead to different conclusions than looking at data on a broad scale. How often does this actually occur in professional tennis matches? A study in 2013 set out to answer this question by analysing 61,000 professional tennis matches over a 21 year timespan. It found that about 4.5 per cent of games were won by the players with fewer overall points (so roughly 1 game in 22).

One of the most famous examples of this phenomenon occurred in the first round of Wimbledon in 2010, when American player John Isner defeated French player Nicolas Mahut, despite Isner winning fewer points overall (Isner won 478 points and Mahut won 502). The final score for the match was 6-4, 3-6, 6-7, 7-6, 70-68 (remember: no tie-breakers in the fifth set at Wimbledon). This match also holds the record for the longest tennis match in history: 11 hours and 5 minutes spread across 3 days. A plaque commemorating this feat remains on Wimbledon Court 18.

Matches where the losing player wins more games (as opposed to points) are more rare, but still possible. In the final match of the 2009 Wimbledon Championship, Swiss player Roger Federer defeated American player Andy Roddick, despite Federer winning 38 games to Roddick’s 39 games. The final score was 5-7, 7-6, 7-6, 3-6, 16-14.

So why not switch to a simpler scoring system where only the total number of points matters? Tradition (and quirky flavour) aside, it turns out that the same mechanism that allows players to win with fewer points may also give consistently better players a better chance to win the match.

Mathematicians use Markov chains to analyse any system that moves from one state to another with certain probabilities. In his 1989 book Game, Set and Math, British mathematician Ian Stewart used the mathematics of Markov chains to analyse a model tennis match. He found that if one player has probability p of winning any given point (which means their opponent has probability 1−p of winning any given point), then the probability that that player would win any given game was not p. Instead, it was given by the formula:

What does this mean? If p=0.5, so both players are equally likely to win a point, then the probability that either player wins the game is also 0.5, as expected. However, the graph of this function has an interesting shape. 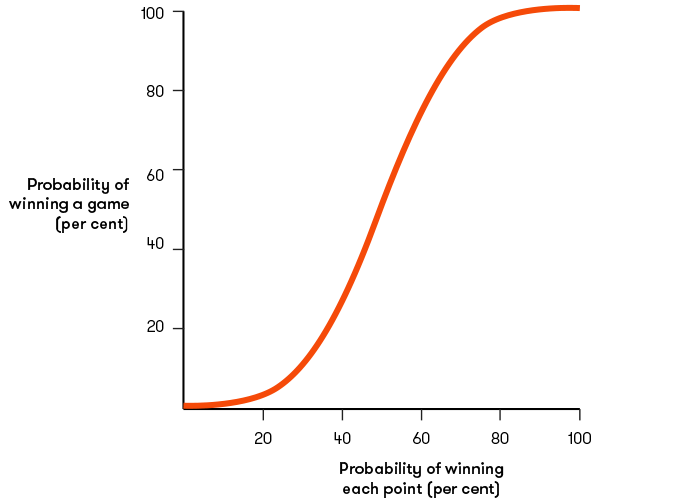 Stewart also found other formulas linking the probability of winning each individual point to the probabilities of winning sets and the match. The effect is magnified as we move from games to sets to matches.

Probability of winning a game

Probability of winning a set
(with a tie-breaker)

Probability of winning a match

Note that this model is only a simple model. In particular, analysis of professional tennis matches shows that the probabilities of each player winning a given point does not stay the same throughout the match, but changes based on the outcomes of previous points. Nonetheless, it is useful to note that the scoring system of tennis rewards players who can maintain a consistent edge over their opponents, even if the edge is only small.

Mathematicians have served up many papers concerning tennis, and it remains an active area of research to this day. We are continuing to learn more about the effects of the scoring system and how it might be made fairer, the best strategies for players to adopt, the impact of the home-court advantage and many other topics. The game is continually changing as new technologies—such as the Hawk-Eye system for tracking ball trajectories—are introduced. The aspects we’ve covered in this article are just the opening points in tennis maths.

The mathematics of voting