New computer? Where will your old one end up?

Time for a new smartphone? What’ll you do with your old one? Chances are, like around 25 million other handsets across Australia, it'll gather dust in a drawer or cupboard. Maybe you’ll get organised and drop it off at a mobile recycling centre. Or you may toss it in the trailer with all your other unwanted or broken or out-of-date stuff destined for the tip.

Estimates are that, globally, less than 20 per cent of all e-waste is formally treated (for example, through safe, proper recycling processes). Most end-of-life e-waste ends up in landfill or is processed through rudimentary means, such as in informal ‘backyard’ set-ups in developing countries. And in Australia—one of the top ten consumers in the world of electrical and electronic products—the picture is particularly gloomy. Australians’ consumption of e-waste far outstrips the measures currently in place to effectively deal with end-of-life products, especially when compared with countries such as Japan and Switzerland.

Yep, it’s a real waste. Literally. When you consider that a million mobile phones contain an estimated 15–16 tonnes of copper, 340–350 kilograms of silver and 24–34 kilograms of gold, and that more than 2 billion people worldwide own one, you have to wonder—isn’t there a better way?

In 2014, around 25 kilograms of e-waste was generated per person in Australia, and the number is rising.

Where does your e-waste go?

More and more—especially in the developed world—we live in a throw-away society, jettisoning huge amounts of leftover food (an estimated $8–10 billion worth every year), buying a dizzying array of packaged products and relying on disposable everything, from shopping bags to nappies. And when it comes to the stuff we chuck out, electronic waste, or e-waste, is fast becoming a towering problem: between just 2009 and 2014 the amount of e-waste generated worldwide doubled. It’s estimated that, in Australia, e-waste is being sent to landfill at three times the rate of other kinds of waste.

Technology (especially the portable kind) is everywhere—it’s an integral part of our lives. You’d be pretty hard pressed to find an adult in Australia today who doesn't have a mobile phone in their pocket or bag, as well as a computer and TV (or several) at home. And, while in our great-grandparents’ day, a TV or a dial-up telephone might have been expected to stick around for at least a couple of decades, many of today’s electronic items (especially things like mobile phones, computers and TVs) become obsolete all too soon. Give it a year or so and, with that brand spanking new phone you got for Christmas looking less attractive than its newer, just-released version, you’ll likely be contemplating an upgrade.

As well as mobile phones and computers, e-waste includes household appliances, electrical goods and TVs. When no longer wanted, much e-waste ends up in landfill—with the toxic materials inside it potentially leaching out into soil and water. Much of our e-waste is shipped overseas for recycling, often to developing countries with less-stringent safety regulations than our own. Until recently, Guiyu, in southeastern China, for example, was notorious for processing much of the globe’s e-waste, with children and underpaid workers reportedly breaking it apart and heating it to extract valuables, exposing them to dangerous fumes and materials.

E-waste contains a whole range of materials—from precious metals to ceramics and polymers. Some of these materials are valuable; some are downright bad for your health. On the toxic side, you’ve got things like mercury, arsenic (in the cathode ray tubes of old TVs), lead, antimony trioxide (a flame retardant), selenium (in circuit boards), cadmium (in semiconductors) and cobalt (in steel for magnets). Valuable materials hidden away in electronic components, such as the printed circuit boards (PCBs) in computers and phones, include gold (an excellent conductor of electricity that doesn’t rust), silver, copper and palladium. 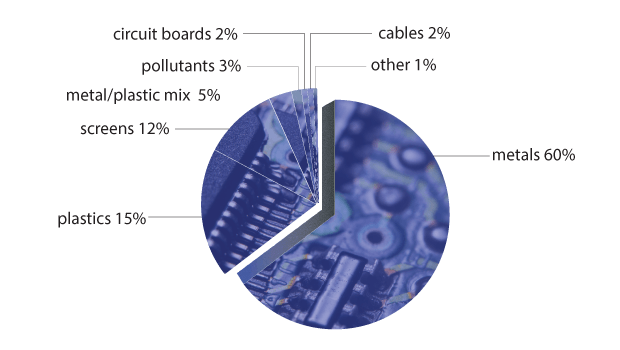 Because they’re a complex mix of so many different materials, electronic items can be difficult to recycle. It’s not a simple case of pulling your phone apart and taking out the good stuff: various metals, for instance, are often mixed in together—in the form of alloys GLOSSARY alloysmixtures of two elements, one of which is metal , for example. Electronic waste is usually heated in order to extract the various materials—but, if not carried out under proper conditions, this carries the risk of releasing toxic fumes.

Given the fact that discarded electronic goods contain such a vast amount of potentially useful (not to mention finite) materials, there are those who argue that it’s time we stop thinking of e-waste as waste. Instead, we should start viewing it as a resource—an above-ground or urban ‘mine’ from which we can extract valuable and useful materials, including precious metals. Indeed, while mining a tonne of ore yields about 1 to 5 grams of gold, ‘mining’ the same weight of mobile phones will get you around 198 grams.

Getting back to fundamentals

Traditional recycling focuses on reusing materials in their original form—for example, recycling steel into steel. But what if we took a different approach—one that, instead of looking at materials in terms of what they are, looks at what they’re fundamentally made of: their basic elements?

The ability to separate waste out into its basic elements becomes especially important when you’re dealing with items which are made up of a whole range of materials, including alloys. Printed circuit boards are a prime example; they’re among the most complex kind of e-waste. The typical composition of a PCB is 30 per cent ceramic, 30 per cent organics and 40 per cent metals—although even this can vary a lot between different brands and between PCBs made at different times. If we zoom in on just the printed circuits themselves (the wiggly, miniature road-like lines on a PCB), we find a veritable soup of materials. The printed circuits are made of copper. These are coated with a layer of tin–lead to prevent oxidisation, while the soldering materials are plated with tin–lead, nickel and, finally, gold.

Turning up the heat on PCBs

Australian scientists have been investigating how we might use such an approach to extract various materials from printed circuit boards—and they’re finding that the potential resources in PCBs go far beyond those precious metals that have traditionally been seen as worth extracting. (Indeed, the extraction of precious metals from e-waste can result in other problems—such as the creation of secondary pollution when non-metallic ‘leftovers’ end up in landfill).

Key to this process is the use of controlled, very high temperatures, known as pyrolysis. ‘Pyro’ comes from the Greek ‘pyr’, meaning fire (think funeral pyre, or pyromaniac), and ‘lysis’ means separating. Pyrolysis is a chemical reaction which breaks down materials using heat in the absence of oxygen. When molecules are heated, they begin to vibrate at a higher frequency than usual. Eventually, they become so shaken and stretched that they break down into smaller molecules. It’s the same process that happens in some kinds of cooking—when you bake potatoes in a dry oven, for example, to get those delicious brown, crispy skins. The reason why pyrolysis can only occur with no oxygen present (or very little, in the case of your oven-baked potatoes) is that otherwise the heated material will simply burn.

Using heat to separate, combine or transform materials is nothing new. Indeed, it’s how people came up with the first alloy, bronze, which resulted from the combination of copper and tin in fire. Today, we have the technology to create furnaces that can reach extremely high temperatures, and which can be precisely controlled—allowing all kinds of experimentation with various materials.

Scientists at the Centre for Sustainable Materials Research & Technology (SMaRT) at the University of New South Wales are doing just that. Not only are they using small, high-temperature furnaces to safely extract metals from PCBs, but they are also looking beyond metals to how other materials—such as carbon—may be recovered from e-waste. In one experiment, they found that temperatures of over 1,350 °C could be used to remove toxic lead from waste printed circuit boards. The stuff that was left behind after heating was mainly composed of carbon—which, further research revealed, could be used as a reductant in ironmaking industries. A more recent experiment showed that, when PCBs were heated to 900 °C, the resulting chemical reaction not only separated out toxic lead, but created useful copper-tin (bronze) nanoparticles in the process.

In another experiment, researchers observed the creation of novel carbon microfibres when PCBs were exposed to high temperatures. A collection of polymer-rich single-sided PBCs was cut into small pieces, placed into a crucible and put into a small, horizontal furnace. Argon gas was fed in through a tube (to ensure an inert atmosphere) and the circuit boards were heated to very high temperatures—between 750 and 1,550° C. As you’d expect, the plastics were affected by the high temperature first. The metals started to melt at higher temperatures of 800 to 1,400° C, and their various materials (copper and tin) separated out. What was left was a carbon-rich residue. This residue then evolved at high temperatures into microfibers and foam structures.

Such novel, carbon-based materials have a range of potential uses—they may be used as fuel, for instance, or in metal–carbon composites. Not only could this mean the creation of valuable new products, but it could also reduce landfill and save on the costs of managing waste. The ongoing challenge, which scientists are continuing to work on, will be how to precisely control or manipulate temperatures to create the desired chemical reaction and extract materials at this smaller-than-usual scale.

Scientists at SMaRT are proposing a micro-factory approach to e-waste as an alternative to giant smelters. The idea is that micro-factories, each about the size of a shipping container, could be deployed to local waste-management sites. By controlling the temperature of a small furnace, e-waste could be transformed into various useful resources, depending on what’s needed for local industries. Copper alloys and rare earth elements (metallic elements which tend to occur together in nature and are hard to separate from one another) could be extracted, for example, or glass and plastic could be combined to produce silicon carbide nanoparticles. Toxic or unwanted materials could then be incinerated. Such micro-factories could enable e-waste to be processed in Australia, reducing the need for it to be shipped overseas. They could also be used in developing countries so that e-waste can be safely treated.

SMaRT is also looking at using robots and drones to minimise human contact with potentially dangerous substances, such as found in old mobile phones. Programmed drones are used to identify components like PCBs from a pile of e-waste, then robots separate out chemicals and metals before they’re given the micro-furnace treatment.

Designing for repair and recycling

Innovative new solutions to recycling our e-waste are just one part of the solution. Another is addressing the problem of the built-in obsolescence, unrepairability and frequent upgrading of our electronic devices. As you’ll know if you’ve ever tried to replace just one broken or outdated part of an old TV, phone or computer, it can sometimes be easier to get rid of the lot and start again. One potential solution proposed by some designers and companies is the creation of modular phones made of detachable, replaceable components. The idea is that, if one part needs replacing or upgrading, you can simply remove and replace that part, rather than getting a whole new device. Others advocate designing for recycling—in other words, the materials used in electronic products and the way they’re put together should be designed to make recycling at their end-of-life easy.

So, with all this in mind, as you tear off the wrapping and slide open the box of your shiny new device, it’s worth stopping to think about where your old one might end up. As the saying goes, there really is no ‘away’ to throw things to.

The robots among us: automated labour