From rubbish to rich resources—changing the way we look at waste is providing environmental and economic opportunities.

School of Chemical and Physical Sciences

We produce a lot of waste. Practically every facet of production and manufacturing in our modern world produces some sort of waste product. At the same time, the way of life we’ve become accustomed to depends on what are essentially finite resources for the majority of our products.

But what if waste wasn’t really waste, but just another raw material from which we could use to make a whole swathe of new products? If we can re-imagine our waste materials at the fundamental elemental level, then presto! We no longer have garbage that just sits around rotting (or not) in landfill, but a valuable resource of elements that we can use to build new things.

For example, in this age of online streaming and iPods, how many people still listen to CDs? Instead of just throwing them into landfill we could use waste CDs as a carbon source from which to synthesise silicon carbide (SiC). Silicon carbide is a refractory material and in nano-particle form has excellent thermal, chemical and mechanical properties. Nano-structured SiC materials can be used in field emission displays (a type of flat screen display) and sensor devices.

And another example—when we mine copper, the actual rock we dig out of the ground generally contains around 3 per cent copper, while a used computer circuit board from an old computer contains anywhere between 10 and 20 per cent copper. Which of these two sounds like the more valuable resource now? (If you’re intrigued by this circuit board example, stay tuned. We’ll be doing a separate Nova topic on e-waste soon).

Let’s have a look at just a few innovative ways to turn trash into treasure.

Steel is a fundamental building material, made primarily of iron alloyed with carbon. When we extract iron ore from the ground it’s not pure iron metal—it’s in the form of iron oxide (a compound of iron and oxygen, FeO, FeO2 or FeO3). To make steel, we need to get rid of the oxygen through a chemical process known as reduction. Carbon is an excellent reductant, and when you combine the iron oxide with carbon at high temperatures, you get this reaction:

The carbon pulls the oxygen out of the iron oxide and it’s released as carbon dioxide gas, leaving pure iron.

High temperatures are used for this reaction—around 1550°C—and a very high-grade form of coal, called metallurgical coke, is used as the carbon source. This high-grade coal is very resource-intensive to produce. If only there were other carbon sources that were cheap and easy to obtain …

Take an ordinary old rubber car tyre, same as the ones that happen to be sitting around in landfills all around the world. It’s made of a polymer that’s basically just a mixture of carbon and hydrogen—what if we could use this carbon instead?

Well, it turns out that we can.

The car tyres have their steel rims removed, and are then shredded to pieces of less than 5 millimetres in size. The shredded rubber polymer is then injected straight into the furnace to react with iron oxide to make the iron needed for the steel.

Because it’s being injected directly into the furnace, which is already at the high temperature (1550°C) required for the reaction, the polymer reacts extremely efficiently. It breaks down into very small molecules, and the noxious products (which are generally larger molecules) that are produced when tyres are combusted at lower temperatures are avoided. The small molecules also efficiently progress the reduction reaction needed to convert the iron oxide into iron. So, now we have the following reaction:

The other useful thing about this reaction is that it can exploit both gaseous and solid forms of carbon—it’s not limited to one particular phase. This also improves the overall efficiency of the reaction. And other types of plastic polymers can be used as well as tyre rubber—the carbon from a mixture of coke and HDPE (high density polyethylene) plastics also produces a sustained and efficient reaction, more so than the reaction using coke alone.

The pictures below show a comparison of the reaction process—droplets of slag (a product of the reaction) foaming as the iron oxide reacts with carbon, derived from various sources, at 1550°C. The more slag that is produced, the more efficient the reaction that produces the refined iron needed to make steel.

The slag droplet formed in the reaction using the HDPE-coke blend is clearly larger than that formed from the reaction using only coke. The blends of coke with other polymer reactants, rubber and PET plastic, produce droplets of comparable size to that of the coke-only reaction at the start, but the volume of the droplets formed in the coke-only reaction clearly decreases over time, while the polymer-coke blends sustain the reaction much more effectively, with consistently larger foam droplets.

The ‘re-forming’ of rubber—breaking it down to exploit its elemental make-up, rather than using it to simply make another rubber product—in this steel-making process has both economic and environmental benefits … a win-win outcome! 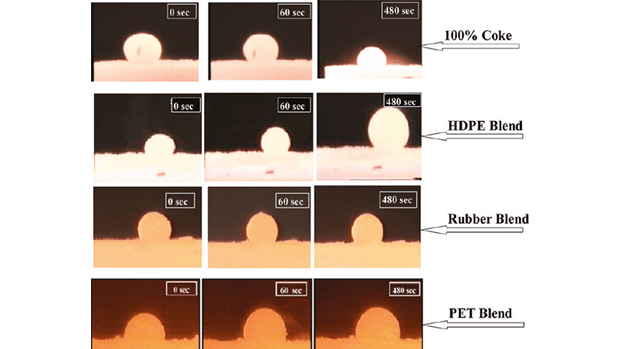 These images show the results of experiments using metallurgical coke (high-grade coal) compared with blends of coke and various types of polymers in the reaction to refine iron in one of the processes used to make steel. The reaction using the polymer blends produce bigger droplets of slag foam than the reaction using coke by itself, indicating the blends drive a more efficient and sustained reaction. Image source: Veena Sahajwalla

This clearly shows that ‘waste’ can indeed become a valuable source of useful materials—one car-owner’s trash can be a scientist’s or engineer’s treasure, if you look at it from the right perspective!

This process has been used in the commercial production of steel by the Australian company OneSteel, and has so far kept more than 2 million used tyres out of landfill. That’s a fair few tyres, and a lot of effort and energy saved in reducing the amount of coal needed for the reaction. This ’green steel’ process has also been implemented internationally.

Using glass to make … other things besides glass

Another example, also from cars, is the glass used in windscreens. This safety glass is laminated with layers of a plastic (polyvinyl butyral) film. This is what stops it from shattering into dangerous shards when it breaks—it’s specially designed with our safety in mind, rather than ease of end-of-use recycling. Because of this, glass from windscreens can’t be processed through the normal glass recycling system—we can’t use it to make fresh glass—so it generally ends up in landfill. What if we don’t try to make it into new glass, but use its fundamental elements to produce a completely different material?

Glass is made of silicon and oxygen, and if we react old windscreen glass in a furnace at 1550°C, along with some iron oxide, we can produce a useful ferro-silicon alloy that has range of industrial applications, including as a valuable alloy in the manufacture of steel. The reaction is again a reduction reaction, where oxygen from both the iron oxide (FeO) and silica (SiO2) is pulled out of these compounds.

To do this, we need some carbon in the mix, which acts as the reductant, taking the oxygen from the two oxides to form carbon monoxide (CO) gas. And guess what makes a nice carbon source for this reaction? A type of plastic called bakelite which is commonly used in, yup—you guessed it—cars! Bakelite is a thermoset, meaning it can't be remoulded and is therefore difficult to recycle using conventional approaches. It generally ends up in landfill.

So, we end up with the following reaction:

This method is yet to be commercialised, but it could offer a future method of effcient recycling for windscreens and much of the plastic found in cars. Using the 're-forming' process bypasses the need to separate the layers of glass from the layers of plastic sandwiched between them—the sort of chore that makes traditional recycling of these types of composite products uneconomical.

And so rather than mining quartz to obtain silicon, we can look to old windscreens as a potential resource, mixing them with the plastics from cars to create new pathways for processing these composite materials. Again, turning what was once seen as useless waste into a valuable raw material.

Using waste to clean up waste

Another innovative idea that has been developed into a reality uses limonene (orange oil)—a waste product from the citrus industry—and sulphur—a waste product of the petroleum industry—to make a polymer that can clean up mercury pollution.

Around 70 million tonnes of sulphur are generated each year as a byproduct of petroleum refining. The citrus industry produces around 70 thousand tonnes of limonene from discarded orange peels. Scientists at Flinders University in Adelaide had the idea of combining these two products, and the reaction of the two produces a polymer that is capable of binding mercury.

The underlying chemistry behind this process is the fact that sulphur and mercury have a very strong affinity, and will react together form a strongly-bonded compound. So why not just use plain old sulphur to clean up the mercury? Well, sulphur on its own is highly crystalline and brittle, which makes it hard to use in practical applications. Furthermore, sulphur on its own can actually nourish bacteria that produce an extremely toxic compound called methylmercury, making the problem worse.

Incorporating the sulphur into the polymer is essentially a means of manipulating the sulphur so it can be used as a coating or moulded device with a large surface area. The polymer is made (like many polymers) from several carbon rings connected together. In this particular polymer, the carbon rings are linked together by chains of sulphur. The end product is a flexible polymer that contains long strings of sulphur atoms, all with sites available to bond to any mercury that it comes into contact with.

The sulphur atoms are capable of bonding with both mercury that’s dissolved in water (in its ionic form Hg2+) and also mercury metal, the form in which it would occur in soils. The researchers suspect that the ionic Hg2+ forms a strong complex with the polymer where the sulphur atoms are ligands for the mercury (a ligand is any molecule that is capable of bonding to a metal).

The polymer can be manipulated into different shapes and forms. By lining containers or filters with this polymer, contaminated water is cleaned as the mercury is stripped out by the polymer. And the polymer has another neat feature—it changes colour from red to yellow after it’s bound the mercury, so it can also act as a sensor to simply detect the presence of mercury in a potentially contaminated substance.

This method not only makes use of products that would otherwise have been seen simply as useless waste, it has the potential to help remediate contaminated land and water and have a huge impact on the health of millions of people around the globe.

These are just a few examples of the numerous ways we can turn our waste into useful products, both keeping material out of landfill and saving on the energy and resources often needed to derive those products from original raw materials. Looking at waste products from this fresh perspective adds a fourth R to the traditional trio: reduce, reuse, recycle, and now, 're-form'. Rather than looking at materials in terms of what they are, looking at what they’re fundamentally made of means we can turn our trash into a veritable treasure trove.

The science and technology of composite materials

The future of plastics