Our absolute best battery friend these days is the lithium-ion battery.

This topic is part of our four-part series on batteries. For further reading see how a battery works, types of batteries and batteries of the future.

Our absolute best battery friend these days is the lithium-ion battery. It’s the one that powers our mobile phones and laptops, devices that have made a massive contribution to changing the way we work and interact with our friends, colleagues, retailers and even strangers. The power demands made by our smart phones would flatten a NiCad or nickel-metal hydride battery in less than an hour, but with the efficiency of the lithium-ion chemistry, we can chat to our mum, watch videos, message our friends, listen to music, buy a pair of shoes online, be provided with navigational instructions and take countless photos all day long.

So what’s so special about lithium-ion batteries? Their main drawcard is their energy density—it’s around double that of a NiCad battery, meaning that a battery half the size will give the same amount of power. They’re light and compact which means they’re better for things like portable electronics than the heavy lead-acid batteries that start our petrol cars.

So what is it about the chemistry of the lithium-ion cell that gives it the edge over its competitors?

As the name suggests, lithium ions (Li+) are involved in the reactions driving the battery. Both electrodes in a lithium-ion cell are made of materials which can intercalate or ‘absorb’ lithium ions (a bit like the hydride ions in the NiMH batteries). Intercalation is when charged ions of an element can be ‘held’ inside the structure of a host material without significantly disturbing it. In the case of a lithium-ion battery, the lithium ions are ‘tied’ to an electron within the structure of the anode. When the battery discharges, the intercalated lithium ions are released from the anode, and then travel through the electrolyte solution to be absorbed (intercalated) in the cathode.

A lithium-ion battery starts its life in a state of full discharge: all its lithium ions are intercalated within the cathode and its chemistry does not yet have the ability to produce any electricity. Before you can use the battery, you need to charge it. As the battery is charged, an oxidation reaction occurs at the cathode, meaning that it loses some negatively charged electrons. To maintain the charge balance in the cathode, an equal number of some of the positively charged intercalated lithium ions are dissolved into the electrolyte solution. These travel over to the anode, where they are intercalated within the graphite. This intercalation reaction also deposits electrons into the graphite anode, to ‘tie’ up the lithium ion. 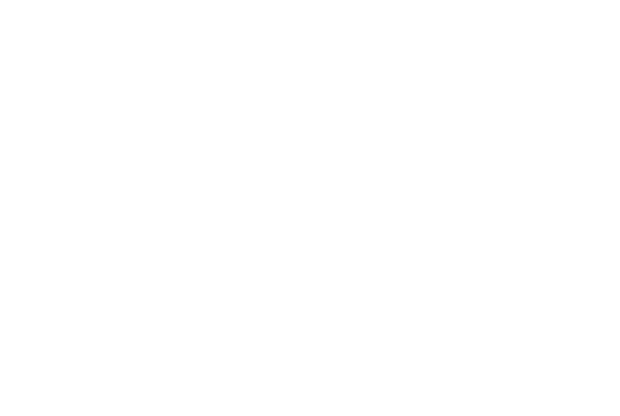 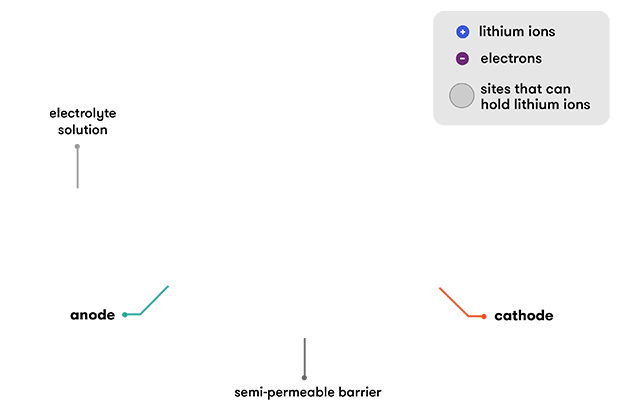 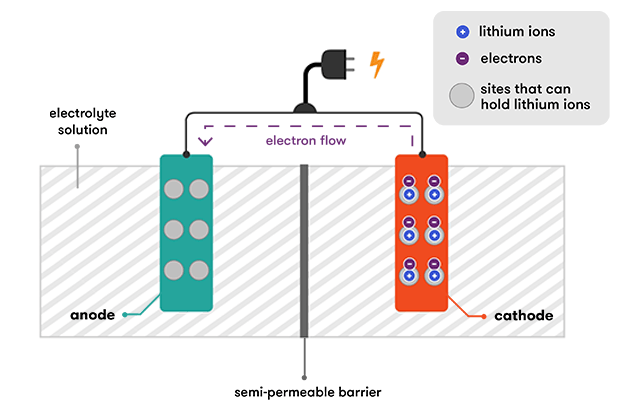 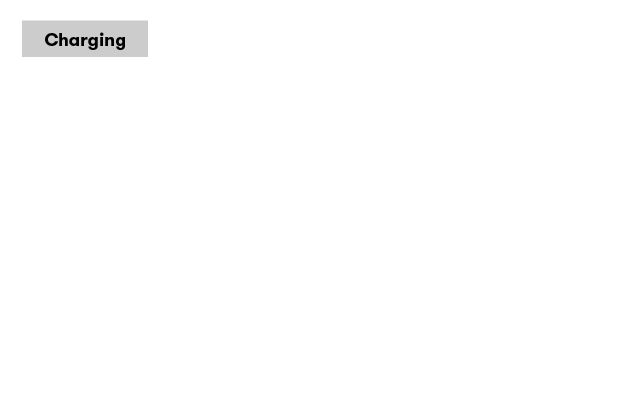 During discharge, the lithium ions are de-intercalated from the anode and travel back through the electrolyte to the cathode. This also releases the electrons that were tying them to the anode, and these flow through an external wire, providing the electric current that we used to do work. It’s the connection of the external wire that enables the reaction to proceed—when the electrons are free to travel, so are the positively charged lithium ions that will balance the movement of their negative charge.

When the cathode becomes full of lithium ions, the reaction stops and the battery is flat. Then we recharge our lithium-ion batteries again, and the external electric charge that we apply pushes the lithium ions back into the anode from the cathode. 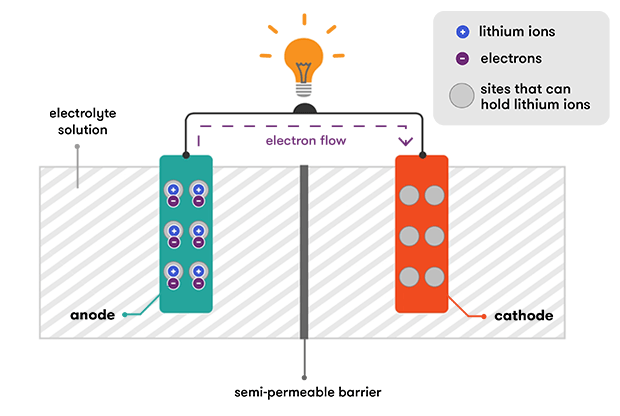 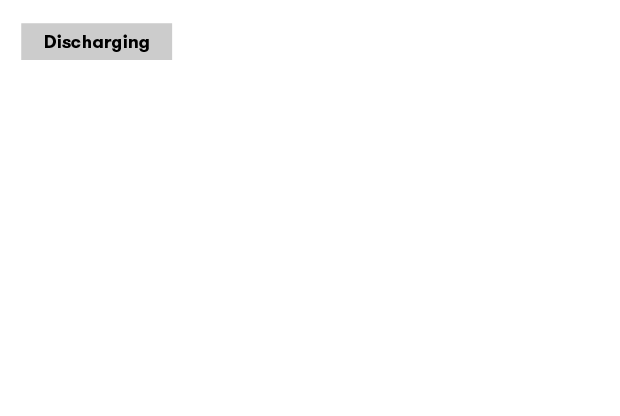 The electrolyte in a lithium-ion cell is usually a solution of lithium salts in a mixture of solvents (like dimethyl carbonate or diethyl carbonate) devised to improve battery performance. Having lithium salts dissolved in the electrolyte means the solution contains lithium ions. This means that individual lithium ions don’t have to make the complete journey from the anode to the cathode to complete the circuit. As ions are kicked out from the anode, others that are already hanging out in the electrolyte, near the electrode surface, can easily be absorbed (intercalated) into the cathode. The reverse happens during recharging.

Being small and light, a lot of lithium can be stored (intercalated) in both the electrodes. This is what gives lithium-ion batteries their high energy density. For example, one lithium ion can be stored for every six carbon atoms in the graphite, and the more lithium ions there are to share the travelling from the anode to the cathode (and back again during recharge cycles), the more electrons there are to balance out their movement and provide the electric current.

The transfer of lithium ions between the electrodes occurs at a much higher voltage than in other battery types and, as they must be balanced by an equal amount of electrons, a single lithium-ion cell can produce a voltage of 3.6 volts or higher, depending on the cathode materials. A typical alkaline cell produces only around 1.5 volts. A standard lead-acid car battery needs six 2-volt cells stacked together to produce 12 volts.

Because of their high energy density, and their comparative lightness, stacking lots of lithium-ion cells together in the one place produces a battery pack far lighter and more compact than stacks made of other battery types. If we stack enough lithium-ion cells together, we can reach a pretty high voltage, such as that required to run an electric car. Sure, all our cars have batteries already, but they’re just to get a petrol or diesel engine going, then the fuel does all the work. An electric car’s battery is its entire energy source, and what gives it the grunt to get up a steep hill. So, it typically will have 96 volts or even more which, even with the high voltage of a lithium-ion cell, requires quite a few cells stacked together.

The anode is usually graphite. However, the repeated insertion of lithium ions into the standard graphite structure in a typical lithium-ion battery eventually breaks apart the graphite. This reduces the battery’s performance and the graphite anode will eventually break down, and the battery will stop working. Researchers are working on developing options to use graphene (single-atom thick sheets of carbon) rather than graphite. You’ll get to read more about graphene and why it’s great in an upcoming Nova topic. 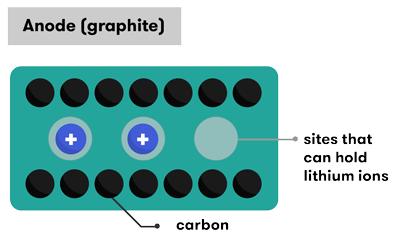 In terms of the material used for the cathode, there are quite a few variations—generally made of a combination of lithium, oxygen, and some kind of metal. 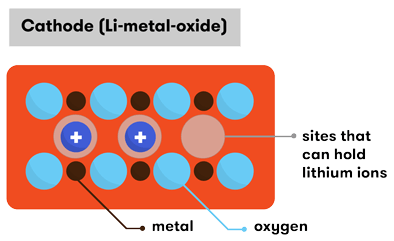 The cathodes used in lithium-ion batteries

The most common lithium-ion cells have an anode of carbon (C) and a cathode of lithium cobalt oxide (LiCoO2). In fact, the lithium cobalt oxide battery was the first lithium-ion battery to be developed from the pioneering work of R Yazami and J Goodenough, and sold by Sony in 1991. The cobalt and oxygen bond together to form layers of octahedral cobalt oxide structures, separated by sheets of lithium. It’s important that this structure allows the cobalt ions to change their valence states between Co+3 and Co+4 (lose and gain a negatively-charged electron) when charging and discharging.

Of all the various lithium-ion batteries, these guys have the greatest energy density, which is why they’re currently the batteries found in our phones, digital cameras and laptops. Their drawback is their thermal instability. Their anodes can overheat and, at high temperatures, the cobalt oxide cathode can decompose, producing oxygen. If you combine oxygen and heat, you’ve got a pretty good chance of starting a fire and, as the chemicals sometimes used in the electrolyte solution, such as diethyl carbonate, are flammable, there can be some safety issues with this battery.

This cell has a high discharge rate and, because phosphate (PO4) can cope with high temperatures, the battery has good thermal stability, improving its safety. This makes it a good choice for things like electric vehicles and power tools, and for storing energy at power stations. It also has a long cycle life, meaning it can be discharged and charged many times. However, it has a lower energy density than a lithium cobalt oxide cell, and a higher self-discharge rate.

This type of lithium battery uses a cathode made from lithium-manganese spinel (Li+Mn3+Mn4+O4). Spinel is a type of mineral with a distinctive AB2O4 structure. The spinel structure has very good thermal stability, improving the battery’s safety. It also promotes ion flow within the electrolyte and lessens the internal resistance that contributes to the loss of a battery’s power over time.

While this type of lithium battery offers high discharge and recharge rates (also due to the spinel structure of the cathode) it has a lower capacity and shorter lifetime.

Replacing the liquid electrolyte in a lithium-ion battery with a solid electrolyte improves the battery’s safety and makes it lighter. As the polymer itself is extremely thin, it also enables greater flexibility in terms of shape and design—it need not be contained in a rigid case, and can be made to be extremely compact.

The polymer electrolyte is a non-conducting material that still allows ion exchange. In early designs the polymer was such a poor conductor that it was unable to facilitate ion exchange unless heated to around 60 degrees Celsius, so small amounts of gel are now added to avoid this issue.

The lithium polymer battery can use any combination of electrodes found in lithium-ion batteries; it is simply the electrolyte that differs.

Just as batteries in general come in all shapes, sizes and chemistries, so do lithium-ion batteries. Their various different chemistries and structures offer different features, often with trade-offs between efficiency, cost and safety.

Lithium-ion batteries are essential to the way we go about our everyday lives. They’ll be with us for some time to come, as they are currently the best bet for powering electric vehicles  and storing energy generated from wind  and solar sources to use at times when the wind isn’t blowing or the sun not shining.

This topic is part of our four-part series on batteries. For further reading see how a battery works, types of batteries and batteries of the future.

How a battery works

Batteries of the future