The energy we get free from the Sun is free and abundant. How do we harness it?

From sunlight to electricity

The University of Melbourne

Earth is bathed in huge amounts of energy from the Sun—885 million terawatt hours every year. This is a lot—around 6,200 times the amount of commercial primary energy GLOSSARY primary energyEnergy in natural sources that has not been converted into other forms by humans. used in the world in 2008. Humans have always used some of the Sun’s energy directly—for drying clothes and foodstuffs, for example. They’ve also utilised it indirectly—through photosynthesis to power the plant growth underpinning the agriculture that supplies us with food and the oxygen we breathe.

And there is another way to use this abundant energy source: photovoltaic (photo = light, voltaic = electricity formed through chemical reaction) solar cells, which allow us to convert sunlight directly into electricity. Since the demonstration of the first silicon photovoltaic cell in 1954, by Daryl Chapin, Calvin Fuller and Gerald Pearson at Bell Laboratories, New Jersey, we have been refining the technology that enables us to harness the reliable, free and clean energy from the Sun.

That first solar cell had an efficiency of around 5 per cent. Many years of solid work have seen that rise to generally around 20 per cent. Solar panels are appearing on more and more rooftops around our suburbs as solar photovoltaics (PV) become an increasingly viable option for domestic electricity production.

But how exactly does it work? How can sunlight be made to power cars, or to produce the electricity we need for our computers, TVs and toasters?

It has been known for more than 150 years that light can have an effect on the electrical properties of some materials. This is called the photoelectric effect. In 1921, Einstein received the Nobel Prize for his work explaining this. Photovoltaic cells are based on a related phenomenon called the photovoltaic effect, and they convert light directly into electricity. Let’s look at how.

Most photovoltaic cells are made of silicon, an element that is at the heart of all modern electronics. Silicon is special because of the arrangement of its electrons—it has four out of the possible eight electrons in its outermost shell. This means that it makes perfect covalent bonds with four other silicon atoms, forming a lattice structure.

This bonding mechanism means there are very few free electrons floating about, which is what we need to create electricity. That’s what electricity actually is, after all—the flow of electrons. Because of the arrangement of bonds in its crystal structure, silicon in its pure form doesn’t have very many free electrons, so we ‘dope’ it.

Doping adds an impurity to the silicon to change the way its atoms are bonded together and share their electrons. Adding small amounts of phosphorus, which has five electrons in its outer shell, as compared with silicon’s four, means that the extra (fifth) electron has nothing to bond to, so it’s free to roam around and create electric current. Electrons have a negative charge, so when the silicon is doped in this way, it’s called a negative material: n-type.

We can also dope with boron, which has only three electrons in its outer shell. This leaves one of the bonds with only one electron, creating a ‘hole’ in the bonding structure. Electrons within the boron-doped silicon can jump around to fill in the hole. Alternatively, the holes themselves can be thought of as moving (in the opposite direction to the electrons) as the electrons hop from one bond to another. This movement also constitutes an electrical current. We now have a material with an overall deficiency of electrons, making a positive (p-type) material.

The extra electrons and holes can float around the lattice; they are ‘shared’ by all the atoms in the structure. This gives each doped material an overall slight preference to either give or receive electrons. This is known as electronegativity—a measure of how strongly an atom or material hangs on to its electrons.

Through doping, and the resulting changes in electronegativeity, silicon is turned into a conductor of electricity (albeit not a particularly good one).

The photons’ energy can also create electron-hole pairs in other parts of the doped silicon. Sometimes, these electron-hole pairs will simply pair up again (recombine) with the extra energy emitted as heat. But if they find themselves near the electric field at the junction of the p- and n-type layers, the electric field will send electrons to the n-type layer, and holes to the p-type layer.

If you create an external connection (using electrodes and a wire) between the two layers, the electron will then travel back through the wire to the p-type layer, as an electric current that does useful work. The whole thing acts rather like an electric battery, continually recharged by the sunlight.

How we harness the sun 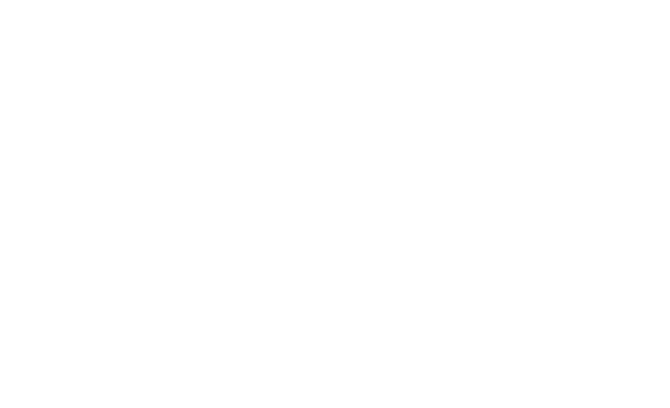 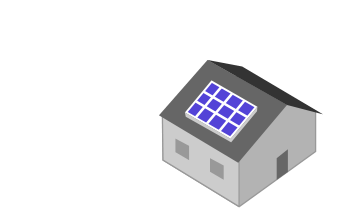 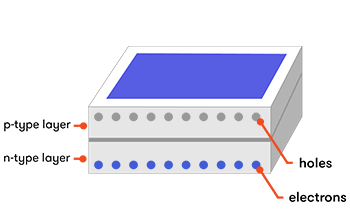 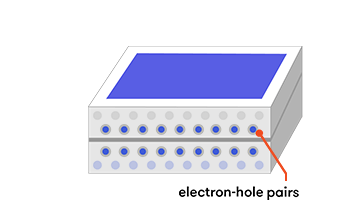 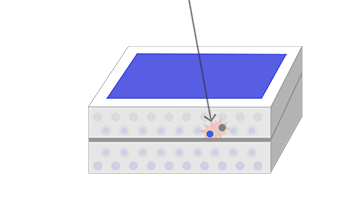 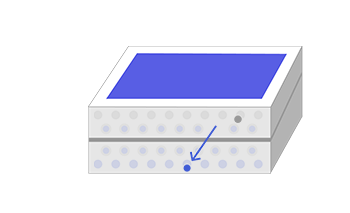 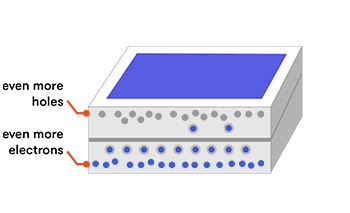 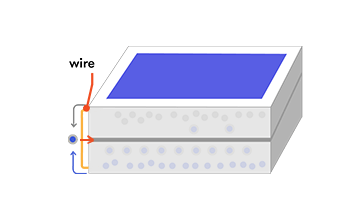 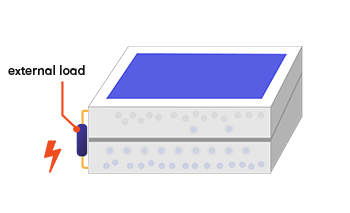 Why these particular elements?

Out of all the elements in the periodic table, why use silicon as the main component of a solar cell, and why dope with phosphorus and boron?

Silicon is the most common go-to material for a photovoltaic cell because the maximum wavelength of energy it absorbs is around 800 nanometres, which is close to the peak of the radiation emitted by the Sun. The Sun emits a spectrum of radiation, ranging from around 300 nanometres to 2,000 nanometres, but by far the majority of it is within the range of 420 to 700 nanometres.

The reason why phosphorus and boron are most often used as the doping agents is a bit more complicated. In order to create the flow of electrons within the solar cell, the electrons must be excited out of their stable ‘ground’ state up into the higher energy level needed for them to move from the p-type to the n-type side. This amount of energy is equivalent to the difference in electronegativity between the two layers (this is called the band gap). Any less and it won’t be enough to ‘knock’ the electron free, and any extra energy would be wasted.

It turns out that the difference in electronegativity between phosphorus-doped and boron-doped silicon is pretty much equal to the energy provided by one photon of sunlight, making them the ideal doping agents for a silicon solar cell.

The quest for efficiency

No method of energy transformation is 100 per cent efficient. Plants convert sunlight into energy with an efficiency of around 5–6 per cent, and a fossil-fuel power plant is only around 30–50 per cent efficient—all the extra energy contained in the fuel it burns is emitted as heat, and effectively wasted.

There a few issues that mean solar cells are not totally efficient in converting sunlight into electrical energy. One is that the energy provided by the photons might be insufficient to allow the electrons to break free from their electron–hole pairs. At other times, the photons might provide more energy than required for the electron to break free, and the excess is wasted. Also, when the electrons break free from their pairs, they often simply recombine with another hole without moving over to the n-type layer.

The ultimate efficiency of a silicon photovoltaic cell in converting sunlight to electrical energy is around 20 per cent, and large areas of solar cells are needed to produce useful amounts of power. The search is therefore on for much cheaper cells without too much of a sacrifice in efficiency.

In 2014, a team from the University of New South Wales set a world record of 40 per cent efficiency using commercially available (traditional single-crystal silicon) solar cells. They developed a method of focusing the sunlight and used a special filter to capture sunlight that is usually wasted.

Several other promising lines have also been pursued by the University of New South Wales. Instead of cutting slices from specially grown silicon single crystals, one possibility involves growing thin films of silicon on much cheaper polycrystalline silicon wafers, or onto glass plates. This process uses 99 per cent less silicon than conventional techniques and is now being utilised commercially in Europe.

In addition, Swinburne University of Technology is developing thin film amorphous silicon, a type of silicon in which the atoms do not form a regular crystalline lattice. With amorphous silicon, thinner layers of silicon can be used, again making the process much cheaper, though less efficient.

A significant focus of activity is in new thin-film solar cell modules that are potentially lighter, more flexible and cheaper than traditional solar cells, which are made on glass. Cadmium telluride and CIGS (copper indium gallium (di)selenide) may well soon challenge traditional silicon modules in both cost and efficiency.

Newly emerging technologies include organic solar cells. The Victorian Organic Solar Cell Consortium (CSIRO, the University of Melbourne and Monash University) is printing solar cells on flexible polymers, rather like the approach to the Australian plastic banknote. Related work is under way at the universities of Newcastle and Queensland.

Solar cells made from the organinc–inorganic combination of methyl-ammonium lead trihalide, with the slightly more manageable name of perovskites, are another fast-growing solar cell technology. CSIRO has recently demonstrated the potential for roll-to-roll printing of perovskites, a method that allows speedy fabrication of the solar cells. The Australian-listed company Dyesol has announced scale-up of perovskites in a joint venture in Turkey, an early step towards these flexible, printable solar cells becoming commercially available.

Solar energy is likely to continue to exist so far into the future that we can think of it as being unending. Essentially, it’s renewable, unlike fossil fuels which are running out as we use them.

In addition, using solar energy doesn’t cause air pollution or involve damaging the Earth’s surface. It requires no difficult and expensive extraction procedures. Creating the solar cells themselves does require resources—converting sand into silicon still requires considerable energy—but this is paid back within three or four years of a solar cell’s operation.

But the main problem is what to do when the Sun doesn’t shine. Although we consume a considerable amount of electricity during the day (especially for air-conditioning during hot summers) when the Sun is readily available, we also need storage to tide us over on cloudy days and at night-time. On a domestic scale, the frontrunner in batteries to complement a rooftop solar panel set-up is currently the Tesla Powerwall. There are some other strong contenders in the products being rolled out by Panasonic and LG Chem.

Australia receives the most solar radiation per square metre of any continent in the world (although the Red Sea area, including Egypt and Saudi Arabia, has the highest solar energy potential). While there are now more than one million rooftop solar systems installed around Australia, according to figures from the International Energy Agency, photovoltaic solar only contributed around 0.6 per cent of Australia’s energy in 2012.

Even areas in southern Australia have extremely high potential for solar resources. The state of Victoria has a greater solar potential than Germany, which currently has the highest installed solar capacity of any country in the world. The Climate Commission’s report about solar energy in Australia (PDF) states that the amount of solar radiation Australia receives in a year is around 10,000 times the national energy consumption, and that an area of just 20,000 square kilometres would be enough to provide the country with its energy needs.

We’ve clearly got an abundant resource at our fingertips. We just need to harness it.

See our infographic on sources of electricity.

Blowing in the wind

How a battery works