Rising ocean temperatures may push coral reefs to their limits.

The University of Queensland

Imagine you are on a beautiful tropical island on the Great Barrier Reef. You put on your mask, fins and snorkel and jump into the water. But instead of the famous brightly coloured coral, you see a drab underwater landscape dominated by blue-green algae (cyanobacteria) and seaweed, but no corals.

As the world's oceans become warmer, and more acidic, this scenario will occur more frequently, on the Great Barrier Reef and coral reefs the world over.

The ancient Greeks mistakenly believed corals to be plants. They are actually simple multicellular animals that are related to anemones and jellyfish. Individual coral animals, called polyps, build external skeletons made of calcium carbonate (similar to limestone).

Hundreds of individuals join together to make coral colonies. Each polyp sits in its skeleton cup, and has a central mouth surrounded by tentacles with stinging cells on them. The tiny tentacles trap passing plankton and push it into a small cavity that acts as a stomach.

But it takes more than a bunch of coral polyps to make a healthy coral reef. Corals also play host to thousands of tiny organisms called zooxanthellae, individuals that live within each coral cell. Zooxanthellae are single-celled dinoflagellate microalgae that use photosynthesis  to produce organic carbon (energy) in the form of sugars and other compounds. They pass most of these on to their coral hosts. These compounds make up over 95 pre cent of the coral’s food and nutrition requirements. In return, the zooxanthellae receive inorganic nitrogen and phosphorus from the waste products of the coral polyps own metabolic processes.

The zooxanthellae are also responsible for the brown colour of many corals. The bright pinks, greens and blues also seen in coral reefs are produced by fluorescent compounds made by the coral host that protect the zooxanthellae from getting too much sunlight, which can be a problem at the middle of the day on coral reefs in the tropics.

Corals also make compounds (called mycosporine-like amino acids) which act as a sunscreen, protecting them from too much ultraviolet radiation. Corals can vary the concentration of both of these compounds to help them acclimatise to local conditions. However, there are limits to the ability of these pigments to respond and protect the zooxanthellae. If conditions change too quickly or substantially, the coral’s ability to acclimatise will be overwhelmed, leading to coral damage or death. 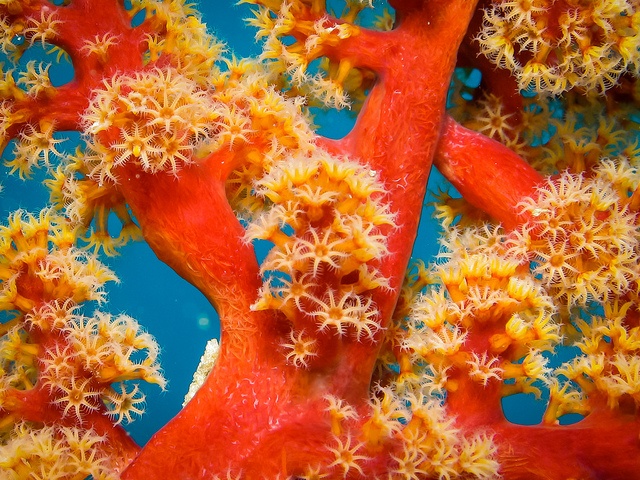 Not too hot, not too cold... it’s got to be just right

Corals are also fussy about the temperature of the water in which they live. Some cool water corals are happy with water temperatures of around 18°C, while lots of tropical corals live in waters with temperatures between 23 and 29°C. Some, like those in the Arabian Gulf, can experience temperatures up to 34°C or more.

Although most corals can cope with higher temperatures for short periods of time, they don’t like it if temperatures stay high for long periods—a coral that lives in 27°C water may cope with the water being 29°C for a day or two, but wouldn’t like to be in 31°C for a week.

Bleaching occurs when the close symbiotic relationship between the zooxanthellae and their coral hosts breaks down. This can be caused by a number of environmental stresses, most commonly higher water temperatures, particularly when combined with still, warm ocean conditions. The photosynthesis process in the zooxanthellae is disrupted, and they produce an excess of products that become toxic to themselves. This in turn damages the metabolism of the coral polyp, which expels the brown zooxanthellae, leaving the coral skeleton a stark, ‘bleached’ white.

The bleached coral can recover, but only if water temperature cools again and the zooxanthellae have time to be able to repopulate the cells of the coral host. If temperatures remain above the bleaching threshold, zooxanthellae will be lost for substantial periods of time. Without the meal ticket provided by their zooxanthellae, corals will eventually die from starvation and disease.

Heat stress will generally result in the mass bleaching of large areas of coral. Smaller regions of coral reefs can also affected by more localised impacts, such as:

Temperatures are on the up

Over the past 100 years, the temperature of seawater in almost all tropical areas has been rising rapidly. Comprehensive sea surface temperatures have been meausred in the Australian region since the early 1980s. These, and historical records show that the past two decades have been the warmest since these records began in 1870.

These records are complemented by records from the skeletons of long-lived corals such as Porites. The corals’ calcium carbonate skeleton is made from calcium, carbon and oxygen. There are two main isotopes of oxygen found within the calcium carbonate, and the ratio of these two isotopes depends partly on the temperature of the water in which the coral grew. So, as the coral grows, laying down new layers of calcium carbonate, it creates a record of temperature. By studying how the oxygen isotope ratio varies through a core of the coral skeleton, scientists have been able to reconstruct sea temperatures going back hundreds of years. These records show that in the context of the past few hundred years, recent temperatures have been unusually warm.

Ocean temperatures are predicted to continue to rise if we keep adding carbon dioxide and other greenhouse gases to the atmosphere. The 2013 Intergovernmental Panel on Climate Change (IPCC) report predicts an increase in the surface temperature of tropical oceans of 3–4°C by 2100 if no change is made to the current patterns of greenhouse gas emissions. Australian and international research has shown that an increase in average global temperatures of just 1°C above the preindustrial period will cause coral reefs to lose all their corals by mid-century.

See our infographic on coral bleaching.

Although the coral animals that make up modern coral reefs have occupied reef systems for at least 240 million years, the current reef structures on the Great Barrier Reef formed after sea levels stabilised around 8,000–10,000 years ago. Coral reefs generally occur in areas where average water temperature is only 1–2°C below the temperature at which the corals become stressed and undergo bleaching, so an average temperature increase of 3–4°C by the end of this century, as predicted by the 2013 IPCC report, does not bode well.

Some scientists have suggested that corals may be able to adapt to warmer temperatures by changing the type of symbiotic zooxanthellae they host. However, there is little scientific evidence of corals being able to swap their symbiotic zooxanthellae for new, warmer varieties. There is some evidence that some types of coral can cope better with warmer temperatures than other types. However, these differences between coral types will only give more thermally tolerant corals a leeway of 1–2°C. Consequently, these differences will only help in the short term and will certainly not offer a long term solution in the face of continued increasing temperatures.

As water temperatures continue to increase, going beyond the window of temperatures that corals like to live in, they will find it harder to survive. The stresses of increased temperatures will be compounded by those of increased extreme weather events like cyclones and storms, and also ocean acidification. Corals in warmer and more acidic seas will find it harder to recover after natural disturbances, leading to an ever diminishing amount of coral on the world’s coral reefs.

Preventing stress from things like too much sediment, pollution and destructive fishing will help our reefs. Ultimately, though, it is the sustained higher temperatures that climate change is projected to bring that pose the greatest threat to the well-being of coral reefs. Curbing of greenhouse gas emissions will make the biggest difference in ensuring their long-term survival. 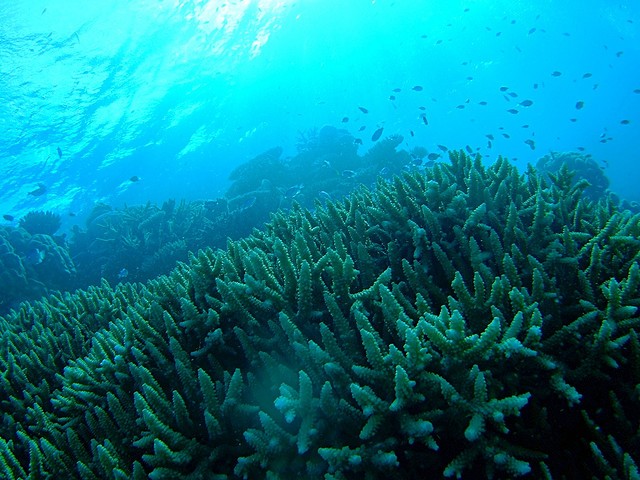 Corals as part of an ecosystem in the Great Barrier Reef. Image source: Geir Friestad / Flickr.