Over a thousand-year timescale, around 80 per cent of human-caused carbon dioxide emissions will end up in the oceans.

The University of Queensland

The University of New South Wales

Chemists have long known that a beaker of water sitting in a lab will absorb carbon dioxide (CO2) from the air and become more acidic. Could it happen at a larger scale—if we greatly increased the concentration of CO2 in the world's atmosphere, would some of it be absorbed by the world’s oceans? What would be the ecological effects? Over the next century or so, we are going to find out.

For more than two hundred years, humans have been releasing large quantities of CO2 and other greenhouse gases (methane, water vapour, nitrous oxide and ozone) into the atmosphere. Greenhouse gases are produced mainly by burning fossil fuels, such as coal, oil and natural gas, and by clearing and burning vegetation. They are known as greenhouse gases because they ‘trap’ heat in the atmosphere, like glass does in a greenhouse and in doing this they help warm the Earth.

In 1750, the concentration of CO2 in the Earth’s atmosphere was around 278 parts per million (ppm). It had been at or around this concentration for at least 8,000 years. In 2012, however, this figure reached 400 ppm, an increase of around 44 per cent. The Earth’s climate systems have already been affected by this increase in CO2 and other greenhouse gases, and average global temperatures have increased by around 0.7°C over the past 100 years. This might not seem like much, but if the concentration of greenhouse gases in the atmosphere continues to increase, average surface temperature of the Earth could rise by as much as 5–7°C by 2100.

Not all the CO2 released into the atmosphere stays there; some of it—about a third of all human-induced emissions—has been absorbed by vegetation via photosynthesis and a similar amount has been soaked up by the ocean. We're lucky that it has, or the amount of global warming that has already occurred would be much greater. 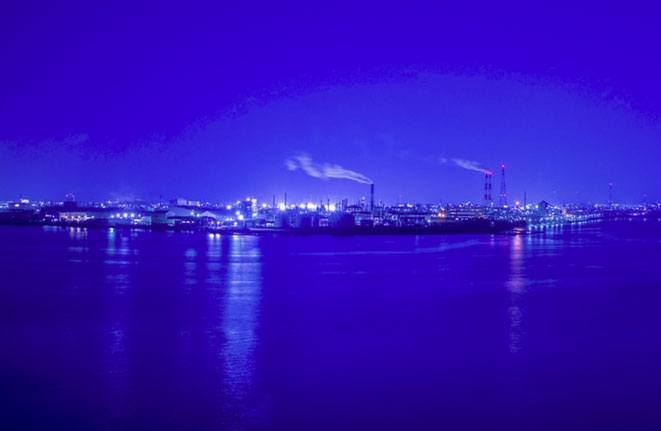 The world's oceans are not immune from extra carbon dioxide in the atmosphere. In the long term, around 80 per cent of human-caused emissions will end up in the oceans. Image credit: Takuma Kimura on Flickr.

Pure water has a pH value of 7, and is considered neutral. Values below 7 are acidic, and values above 7 are called basic, or alkaline. Most drinking water usually sits between 6.5 and 7.5. Vinegar has a pH of 3, a cola drink 2.5 and battery acid around 0 or 1 (strongly acidic). On the other end of the scale, heavy duty cleaning products can have pH of 12–14 (strongly alkaline). The pH scale is logarithmic, which means that each value is ten times stronger or weaker than those on either side of it. So, a pH of 4 is 10 times more acidic than a pH of 5, and 100 times more acidic than a pH of 6.

Everyday objects on the pH scale

Slide the bar left and right to see where these everyday objects fall on the pH scale.

The oceans are naturally alkaline, usually with a pH of around 8.2. As the oceans absorb CO2, carbonic acid (H2CO3) is formed. This then releases hydrogen ions (H+) which make the oceans become more acidic. Scientists estimate that the absorption of some of the additional CO2 in the atmosphere has already lowered oceanic pH by around 0.1 since 1750, bringing it to 8.1.

The oceans will continue to absorb the extra CO2 in the atmosphere and under current projections oceanic pH will reach 7.7 by the end of this century, a decline of 0.5. The ocean will still be slightly basic—so we won't be creating a vast acid bath. But remembering that the pH scale is logarithmic, what looks like small changes in pH represent large changes in the concentration of hydrogen ions. The change in pH of 0.1 pH units since 1750 translates into an increase in hydrogen ions of around 26 per cent.

There are many other chemical species dissolved in the ocean besides hydrogen ions. Some very important ones include calcium (Ca) and carbonate (carbon combined with oxygen CO32-). Many marine creatures, such as reef-building corals, crustaceans, starfish and sea urchins, oysters and mussels, and some types of tiny planktonic critters, use Ca and CO3 from the ocean to make calcium carbonate (CaCO3) which forms their shells and skeletons. Calcium carbonate can come in two forms—calcite and aragonite. They are both made of Ca and CO3, but have different arrangements of the calcium, carbon and oxygen atoms. This affects their stability—aragonite is less stable, and easier to dissolve, than calcite.

The upper ocean is generally supersaturated with respect to both calcite and aragonite. This means there is plenty of carbonate around, and the animals that use these minerals to build their skeletons and shells, such as plankton, corals, and other shelled animals, can do so with no problems. However, as pH decreases in the ocean, and the carbonate saturation state also decreases, these organisms may run into trouble. The shells and skeletons they make will be dissolved by the undersaturated seawater.

Along with pH, both temperature and pressure in the ocean also affect the stability of calcium carbonate. As you go deeper in the ocean, temperature decreases and pressure increases. Below a certain depth, known as the saturation horizon, calcium carbonate becomes unstable and starts dissolve. As pH decreases in the upper layers of the ocean, the saturation horizon moves upward, shrinking the habitat available to the organisms that use calcium carbonate to build their shells and skeletons. Cold water is naturally less saturated in carbonate ions, so Arctic and Antarctic waters will become the first regions to become undersaturated. However, marine organisms everywhere face similar challenges given the fact that they are adapted for the water chemistry where they live. Cold-water corals, which often occur deep in the ocean, will be highly vulnerable. It is predicted that large regions of the Southern Ocean could have a saturation horizon for aragonite at the surface within the next decade or two.

One of the victims of these extra hydrogen ions is a type of phytoplankton called coccolithophores, one of the most abundant single-celled algae in the ocean. They are found in the upper, sunlit layers of the sea and play a vital ecological role. Coccolithophores produce a large proportion of the planet's oxygen, sequester huge quantities of carbon and provide the primary food source for many of the ocean's animals. Coccolithophores use calcite to form tiny plates, or scales, on their exterior. Lower pH, and a drop in the carbonate saturation state, and dissolution of calcium carbonate could therefore have a harmful effect on the abundance of coccolithophores and, consequently, on the health of the oceans and the planet.

Scientists ran some experiments growing coccolithophores and another type of plankton, pteropods, or sea butterflys, under different pH conditions: some that corresponded to the oceanic conditions with present day concentrations of atmospheric CO2, and others that were representative of what we are likely to see by the end of this century, with projected atmospheric CO2 concentrations of 780–850 ppm. The coccolithophores that grew under the high atmospheric CO2 (low pH) conditions grew shells that were clearly malformed, and the pteropod shells began to dissolve, as shown in the images below.

The effects of ocean acidification upon plankton

Select the species name below and use the normal and low pH toggle to see the differences. 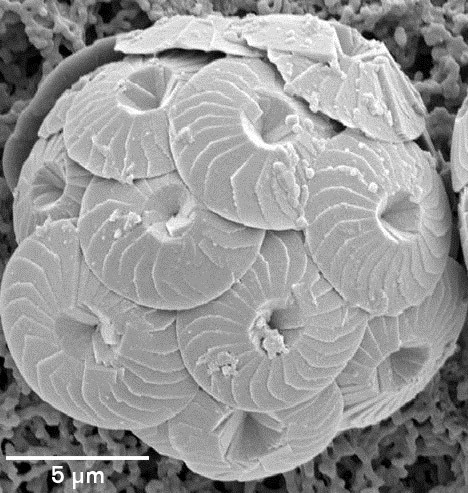 Corals, shellfish and other marine life

Some shellfish will struggle to grow their shells, with larval stages particularly vulnerable. Along with difficulties in shell growth, changes in pH and carbonate chemistry also make it more difficult for some animals to regulate their cell chemistry. They may end up spending more energy on growing their shells, detracting from their ability to grow, reproduce or cope with other stresses. In some cases, the neural systems of fish, which are highly exposed to the changing chemistry, are being seriously affected.

However, as with all natural systems, things are rarely black and white. A team of researchers from Woods Hole Oceanographic Institution have found that not all calcifying animals react in the same way to lower pH conditions.

But although some animals and plants may not fare so badly as others, the impacts upon marine biodiversity have the potential to be severe. Changes that threaten coccoliths and plankton will put pressure upon the broader marine food chain. And as around 25 per cent of the oceans’ animals depend in some way upon coral reef systems, if these decline, then the ramifications will be far-reaching.

It's also important to remember that the stress ocean acidification will place on marine life will not be acting in isolation. As well as a drop in pH, marine life will have to cope with increasing temperatures, changes in currents and ocean circulation patterns, and in some areas, existing problems of pollution or over exploitation. In many cases, the cumulative effect of these stresses could well be greater than the sum of the parts. 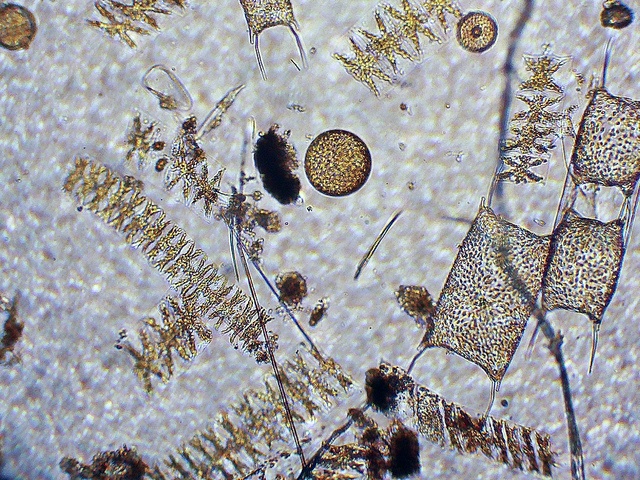 Plankton are tiny creatures that float about in our oceans, and can be vulnerable to the effects of ocean acidification. Image credit: Chris Moody on Flickr.

Rising atmospheric and ocean temperatures are just part of the climate change problem. We are also changing the chemistry of our oceans, with serious implications for the entire marine ecosystem. A rapid and significant reduction in greenhouse gas production is required to help protect our oceans and the diversity of life they support.