There are a lot of animals living on the Great Barrier Reef—and they’ve all got their own job to do.

The enormous coral reef that graces the waters of eastern Queensland extends for 2,300 kilometres, is the planet’s largest living structure, and can be seen from space. Its 2,500 individual reefs and 900 islands extend from the northern tip of Queensland down to south of Gladstone, and its ecosystems range from shallow near shore environments to deep waters 250 kilometres offshore. It is the largest coral reef ecosystem on our planet and home to not just corals, but countless other marine life. It’s our Great Barrier Reef.

How the reef formed

Coral reefs form under a rather specific set of circumstances—the temperature, water chemistry and water depth have to be just right. Although deep water corals do exist, the majority of reef builders like to be in shallow waters, where sufficient sunlight can penetrate to fuel the photosynthesis of the algae that lives alongside the coral animals and provides them with essential food. As sea level rises and slowly floods coastal plains, coral reefs will follow.

A reef’s beginnings occur when coral larvae floating around in the ocean attach themselves to a solid substrate, such as a rock, or older coral skeleton. The coral animals build their skeleton, which is made from calcium carbonate (CaCO3), pulling the calcium (Ca) and carbonate (CO3) from the seawater. Over time, the skeletons of dead corals and shells become cemented together to form massive deposits of the rock limestone.

As its name implies, the Great Barrier Reef is a barrier reef. Its strong limestone structures, formed by the cemented skeletons of corals and other reef carbonates, protect much of the Queensland coastline.

In geological terms, the Great Barrier Reef is pretty young. At the end of the most recent ice age, sea level on the coast of Queensland was around 120 metres lower than today. As it rose, reef systems started to develop, most likely forming fringing reefs along the coastline. These became submerged as the sea continued to rise, and the modern reef as we know it started growing somewhere between 6,000 and 9,000 years ago, when sea level stabilised close to today’s level. Over these few thousand years, it’s grown and developed into one of the world’s most diverse ecosystems.

Biodiversity of the reef

Using species diversity, it is certainly justified to describe the Great Barrier Reef as one of the most diverse habitats on the planet. Close to 9,000 species of marine life call it home, and this doesn’t include any of the huge number of microbes, plankton and fungi that also live there. And although the modern reef system is only around 6,000 to 9,000 years old, many of the creatures that call it home have existed for millions of years.

A different perspective on biodiversity

Another way to look at the diversity of the Great Barrier Reef is to examine all the organisms and animals that live there as if they were machines all working together in an integrated system. So, instead of looking at a fish and seeing a pretty bright orange guy, called Nemo, we would look at him as a machine that performs a job. Figuring out exactly how that machine works helps us understand what job he does, and how important both the job and machine are to the reef ecosystem as a whole. This is known as functional diversity.

Using this approach to look at fish fossils provides insights into the sorts of roles fish played in the reef systems in the past, and how those jobs might have changed (or not!) over time. This is known as functional evolution and it’s a very useful tool for understanding reef evolution, adaptation and potential vulnerability.

For example, fish jawbones have changed a lot over the past 100 million years. Once upon a time, fish were limited to catching their prey by simply grabbing at prey as it swam past them. Over time, some fish’s bones have evolved into structures that let the fish jaw protrude out from its head by up to 8 centimetres. This means the fish are now able to snap up their prey, turning them into more efficient feeders that can catch smaller prey. And, at the same time as fish have evolved these longer jawbones, the prey animals have also evolved: they have become smaller. On the reef today, the average size of a crustacean is less than 1 millimetre. They’re harder to catch and they can hide more easily.

Another change has been seen in the sort of teeth fish have. Prior to 25 million years ago, fish teeth ranged from long and pointy, designed to puncture and tear, to short and round, designed to scrape and grind. Fish that lived on the reef ate crustaceans, and the crustaceans fed on the detritus found on the surface of the reef—fine dust-like particles high in nutrients. The development of long teeth shaped a bit like toothbrushes meant that fish can feed directly on the nutrient-rich detritus on the reef, and leave the crustaceans alone. This change in feeding dynamics would have had an impact upon the entire reef system and played a role in the development of modern reefs.

A job for everyone, and everyone doing their job

Looking at things from this functional approach also enables us to ask some important questions about biodiversity—sure we’ve got lots of species here on the Great Barrier Reef, but is that really important? Does having so many different species actually offer a meaningful benefit to the reef system as a whole? Maybe it’s okay if we lose one or two species, surely another species can just take over their job?

Research done on the Great Barrier Reef says … a little bit of yes and quite a lot of no. There is a very small subset of jobs that are extremely popular—there are lots of species all doing the same job, so yes, if one of those species disappears, the job will still get done. Eating plankton is one of these jobs of choice.

Probably the most important job is providing the actual ‘bricks and mortar’ of the reef structure. The ‘bricks’ are formed by the reef-building scleractinian corals and there are various encrusting organisms (e.g. bryozoans, coralline algae, bivalves) that make up the ‘mortar’. There are several different species of scleractinian corals, and lots of different encrusting organisms, but the role they collectively perform is crucial.

More alarmingly, of the numerous roles performed by reef fish, nearly 40 per cent are performed by a single species. If these specialists disappear, there’s no one waiting in the wings to step in and do their job. High biodiversity clearly does not necessarily ensure high resilience or robustness. 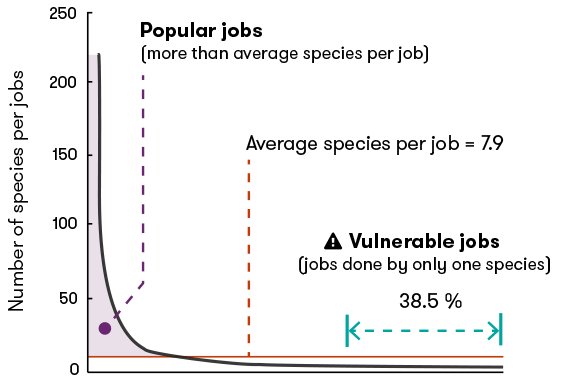 This graph shows the functional diversity of fish communities in the Indo-Pacific region, which includes the Great Barrier Reef. While there are some jobs that are performed by lots of fish, the steep downward slope of the curve indicates that most jobs are done by only a few species, and nearly 40 per cent of jobs are done by only one species.
Adapted from Mouillot et al. (2014) PNAS 111:38, 13757–13762.

Giant hump-headed parrotfish (Bolbometopon muricatum), for example, are integral to a healthy reef system. Parrotfish eat more than 5 tonnes of coral reef material a year, around half of which is live corals. In a healthy system, parrotfish help keep the coral growth in check, with coral growth rates roughly balancing the amount of coral eaten by the parrotfish.

Parrotfish also eat a lot of macroalgae GLOSSARY macroalgaeSeaweeds and other plants that grow in marine environments that are visible to the naked eye, as opposed to microalgae, such as diatoms, phytoplankton and zooxanthellae, that can’t be seen without a microscope. , which is also important within the reef system. In over-fished or nutrient-enriched reefs, macroalgae can out-compete the corals. So, without parrotfish, coral growth and reef structure could change dramatically.

Another example is the role played by the giant moray eel (Gymnothorax javanicus). The eel only eats at night. This means it preys on fish and other animals that are also active at night. These species escape being eaten by predators that operate in the daytime, and so the eel is potentially important in keeping these species in check.

Another specialised predator is the giant triton (Charonia tritonis). This snail is one of the very few animals that can eat the extremely voracious, coral-eating crown-of-thorns starfish (Acanthaster planci). Although they generally would only eat one starfish a week, their very presence helps to disperse groups of crown-of-thorns starfish, weakening their ability to breed and multiply on the reef.

The surgeonfish is another important reef-dweller. Like the parrotfish, it is essential in the process of sediment removal. A study looking at surgeonfish (Ctenochaetus striatus) on the Lizard Island reef, in the northern end of the Great Barrier Reef, found these fish ate somewhere between 8 and 66 grams of sediment per fish per day. They generally get rid of their stomach contents in a different location to their eating grounds, and around one third of the sediment they eat is deposited off the reef, in deep water. This process helps maintain the reef, and possibly specific algal habitats in particular, which are a valuable food source for herbivore fish.

Whether looking at the sheer numbers of species of marine life, or the range of tasks and jobs they carry out on the Great Barrier Reef, it’s clear that it’s an amazingly intricate and dynamic system. It’s also fragile. The specialised nature of many of the jobs carried out by the different species on the reef mean that we can not take the reef’s resilience for granted.

See our infographic on the animals of the Great Barrier Reef.