The University of Melbourne

On a cold and bitter winter night, in a field of boulders beneath a thick layer of snow, a mountain pygmy possum sleeps safe and snug. Strange though it may seem, it is the snow that’s keeping the possum warm; fluffed up by countless pockets of air, the uncompacted snow insulates the ground and prevents the warmth from escaping into the night. Under this white blanket, the mountain pygmy possum can hibernate the winter away.

The pygmy possum might be snug, but those of us concerned for its future can’t afford to be complacent. This is just one example of an Australian species that stands to lose its habitat in the face of climate change. The biodiversity that underpins Australia’s unique ecosystems is under threat from increasing land and ocean temperatures and changing weather patterns.

The world is heating up. The increasing concentrations of greenhouse gases, such as CO2, in the Earth’s atmosphere are causing the planet’s climate system to retain more energy. The average temperature of the Earth's surface increased by an estimated 0.7°C since the beginning of the 20th century and, according to the most recent projections of the Intergovernmental Panel on Climate Change, could rise by 1.6–4.3°C compared to a 1850–1900 baseline by 2100.


Note that the figures above use a compilation of both instrumental and proxy data.

The effects of increased CO2 in the atmosphere and changing climatic conditions are expected to include:

In Australia the climate is expected to become significantly warmer. CSIRO scientists predict that by 2030 average temperatures will rise above 1990 levels by around 0.7–0.9°C in coastal areas, and around 1–1.2°C in inland regions. On a continent already as warm as Australia, such an increase could have major ecological impacts. The number of extreme rainfall events—such as those leading to flooding—is also expected to increase, even though overall, most of the country is expected to become drier in the 21st century.

To estimate the effect of climate change on species, scientists use what they call a climatic envelope (sometimes also referred to as a bioclimatic envelope), which is the range of temperatures, rainfall and other climate-related parameters in which a species currently exists.

As the climate warms, the geographic location of climatic envelopes will shift significantly, possibly even to the extent that species can no longer survive in their current locations. Such species will need to follow their climatic envelopes by migrating to cooler and moister environments, usually uphill or southwards in the southern hemisphere. Marine species will also need to adapt to warmer ocean temperatures. There are several well documented cases of climate-induced shifts in the distribution of plants and animals in the northern hemisphere, but less information is available for southern hemisphere species.

In many cases, however, such migration might not be possible because of unfavourable environmental parameters, geographical or human-made barriers and competition from species already in an area. The mountain pygmy possum is particularly vulnerable to a loss of habitat linked to climate change.

While there is evidence that suggests the distribution of some animals like flying foxes and birds are responding to warmer temperatures in Australia, it is often difficult to separate the effects of climate from other influences upon habitats.

As human activities, particularly agriculture but also settlement and industrial development, have expanded over the last few centuries, natural vegetation—such as forests, grasslands and heathlands—has been cleared in large swathes. Once-extensive plant communities have been reduced in size and broken into smaller patches. This habitat reduction and fragmentation poses a problem because it limits the ability of many species to migrate to areas with favourable conditions. Species on mountain-tops, islands and peninsulas will have a similar problem.

In general, those species with restricted climatic envelopes, small populations and limited ability to migrate are most likely to suffer in the face of rapid climate change. An estimated 25 per cent of Australian eucalypts, for example, have distributions spanning areas where average annual temperature varies less than 1°C. Even a relatively small increase in average temperature will shift the climatic envelopes of such species outside their current distribution. Modelling suggests that by 2070, the majority of species in our protected nature reserves and national parks will encounter novel climatic conditions that they have not experienced in their historical past.

A number of species will be affected physiologically by climate change. There is evidence that some species are physiologically vulnerable to temperature spikes. For example, the green ringtail possum, an endemic species of Queensland’s tropical rainforests, cannot control its body temperature when the ambient temperature rises above 30°C. An extended heatwave in north Queensland could kill off a large part of its population.

Warmer sea surface temperatures are blamed for an increase in a phenomenon called coral bleaching. This is a whitening of coral caused when the coral expels their zooxanthellae, a symbiotic photosynthesising algae that lives within the coral tissues and provides it with essential nutrients. The zooxanthellae also give corals their spectacular range of colours. Zooxanthellae are expelled when the coral is under stress from environmental factors such as abnormally high water temperatures and/or pollution. Since the zooxanthellae help coral in nutrient production, their loss can affect coral growth and make coral more vulnerable to disease. Major bleaching events took place on the Great Barrier Reef in 1998, 2002 and 2006, causing a significant die-off of corals in some locations. Ocean acidification poses yet another challenge for corals because it makes it harder for corals to build their skeletons.

Predicted changes in the intensity, frequency and extent of disturbances such as fire, cyclone, drought and flood will place existing vegetation under stress and favour species able to rapidly colonise denuded areas. In many cases this will mean the spread of alien ‘weed’ species and major changes in the distribution and abundance of many indigenous species. Heatwaves may affect the biodiversity of marine ecosystems, as seen in the summer of 2010–11 in south western West Australia. Extended periods of warmer sea temperatures resulted in the shut-down of the abalone industry, and the migration of whale sharks and manta rays further south and east than usual.

Australia is a dry continent. Its plants and animals are mostly well adapted to drought and have developed a wide range of strategies for coping with the country’s climatic extremes. The marginal nature of the environment, however, means that even minor changes in rainfall patterns could have major impacts on wildlife. The Murray-Darling Basin (Australia’s largest water catchment) and southwest Western Australia are already threatened by salinity and other environmental problems. Predicted decreased rainfall and consequent lower river flows in both regions would have a major impact on aquatic biota. Freshwater wetlands such as the Macquarie Marshes in the central west of New South Wales—and the frogs, waterbirds, turtles and other aquatic life dependent on them—are also at risk because of a change in water quality and quantity.

The basic ingredients for photosynthesis include carbon dioxide and water. Increased carbon dioxide in the atmosphere causes increased growth rates in many plant species. This is good news for farmers, but only if this carbon dioxide ‘fertilisation’ effect is matched by adequate soil moisture and other nutrients. Leaf-eating animals like koalas may not be so lucky: increased concentrations of carbon dioxide could diminish the nutritional value of foliage.

A lot of CO2 that has been emitted into the atmosphere has been absorbed by the oceans. This has resulted in a decrease in the ocean’s pH, which in turn affects the rate at which many marine organisms build skeletons, meaning that reefs damaged by bleaching or other agents would recover more slowly.

According to the most recent IPCC report, sea level is predicted to rise by 26–98 centimetres by 2100, due to the thermal expansion of the oceans and the melting of polar ice-caps and ice sheets. Coupled with the effects of storm surges, which are expected to be of a greater magnitude in a warmer world, this increase in sea level could threaten many coastal ecosystems. Also at risk are mangrove forests and low-lying freshwater wetlands in Kakadu National Park.

What would rapid species extinction mean for Australia?

Climate change is predicted to take place faster in the next century than at any time for at least the last 10,000 years. Coupled with other factors, such as continued land-clearing, this could mean the extinction of species at a rate even greater than when the dinosaurs disappeared around 65 million years ago. Some species not under immediate threat of extinction might nonetheless suffer decreases in population size, diminishing intra-species’ genetic diversity (and therefore face increased vulnerability).

Does it really matter if many species go extinct? The world would certainly be a less interesting place with less biodiversity, but would it affect us?

A diversity of species increases the ability of ecosystems to do things like hold soils together, maintain soil fertility, deliver clean water to streams and rivers, cycle nutrients, pollinate plants (including crops), and buffer against pests and diseases—these are sometimes called ‘ecosystem functions’ or ‘ecosystem services’. A loss of species could reduce this ability, particularly if environmental conditions are changing rapidly at the same time. It is possible that as the climate changes and as species are eliminated from an area we will see a change in some ecosystem functions; this could mean more land degradation, changes in agricultural productivity and a reduction in the quality of water delivered to human populations.

The Earth will continue to warm for some time even if greenhouse gas emissions are somehow instantly curbed. Some species, primarily microorganisms and invertebrates with short generation times, might be able to adapt to changing conditions or evolve in response to climate change. But for many, especially those that are already rare and inhabit limited climatic envelopes, global warming could pose an insurmountable challenge.

In Australia, action plans have been prepared for a number of endangered species that try to address the possible impacts of global warming. For example, the recovery plan for the mountain pygmy possum prepared by the NSW National Parks and Wildlife Service includes the development of a model to illustrate habitat suitability under current snow conditions and to identify key refugia for the possum under the predicted impacts of climate change. The action plan prepared by the government of the Australian Capital Territory for the northern corroboree frog includes a commitment to a coordinated research program on the actual and potential effects of global warming on the species.

At the national level, climate change has also become central to Australia’s Biodiversity Conservation Strategy 2010–2030. This new plan is focussed on removing threats and building resilience in Australia’s ecosystems to help them adapt to climate change and other threats. The plan attempts to engage all Australians in biodiversity and proposes concrete and measurable steps in developing resilience in a cost effective way. Unfortunately, the threats associated with climate change continue to increase with the failure of governments worldwide to reach a consensus around decreasing emissions of CO2 and other greenhouse gases to levels that limit impacts upon biodiversity.

Some of the impacts of climate change may be sudden, but in many cases societies will have some years to adapt their management of biodiversity as conditions change. Increasing our understanding of the effects of climate change on biodiversity, and developing practical ways of mitigating such effects, are critical to limit the damage. Even so, the dangers are great—for humans as well as our native plants and animals. Not only mountain pygmy possums stand to lose their security blanket. 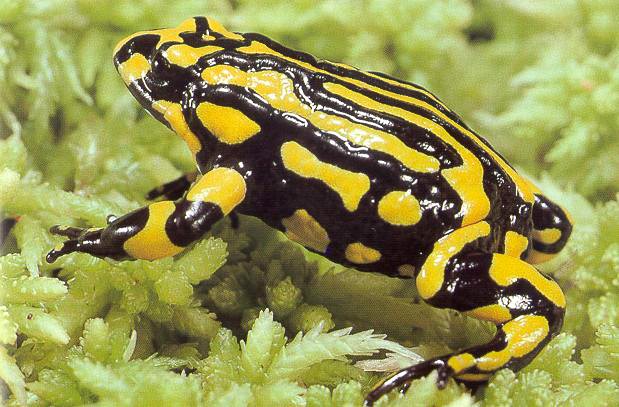 The corroboree frog lives in a small area of New South Wales and Victoria. Further research is planned to assess how global warming may impact on this threatened species. Image credit: Australian Alps on Flickr.

Not just sleep: all about hibernation