Listen to this topic

Before you step outside for a breath of fresh air, consider this—the World Health Organization recently announced air pollution as the world’s largest environmental health risk. We all know what air pollution looks like, but what exactly is it, and what can we do about it?

What is air pollution?

'Air pollution' can be defined as ‘air that contains gases, dusts, fumes, chemicals, particulates or odour in harmful amounts.’ That is, amounts that are or could potentially be harmful to the health and comfort of humans and animals, or could cause damage to plants and materials.  Air pollution can come from natural or anthropogenic (man-made) sources.

The quality of the air has strong implications not only on our own health and well-being, but also for the wider environment and the planet as a whole. For example, stratspheric ozone depletion caused by air pollution has been recognised as a major threat for decades.

Air pollution can come from industrial, commercial, mobile and domestic sources and can generally be divided into three groups.

Interestingly, the things that pollute our air may not be bad in themselves. For example, Ozone in the stratosphere GLOSSARY stratosphereThe stratosphere is the second major layer of Earth's atmosphere. It is stratified in temperature, with warmer layers higher up and cooler layers farther down. is essential, protecting us from ultraviolet rays, but that same gas is a real problem at street level. Lead is another example—it is a durable, easily worked metal that is ideal for waterproofing a roof, screening against X-rays, or even weighting a fishing line – but lead is very nasty when it gets into your bloodstream.

Close the windows to keep the air pollution out? Well, maybe. It might help a little if you live in a large urban city, but definitely not if you (or someone you share your home with) smoke indoors.

When cigarette tobacco burns it gives off a particularly deadly range of substances, including carbon monoxide. You don't have to smoke yourself, just sharing a closed space with someone who is smoking is damaging—even though it may take many years for it to show up.

Household air pollution from inefficient combustion of solid fuels such as wood, charcoal, coal, crop waste and animal dung is in fact the leading environmental factor for death and disability in the world. Previously called Indoor Air Pollution (IAP), it has now been renamed ‘household air pollution HAP) in recognition that the health effects of these pollutants, while created within the household, are not limited to the indoor environment.

Open fires, kerosene fires, and gas fires can also cause problems if they are not properly ventilated. Carbon monoxide is once again the problem here. Carbon monoxide is a fast-acting poison for all animals that have red blood cells (including humans). The gas gets into your bloodstream and attaches itself to the oxygen-carrying red cells and stops them working. Without oxygen your body cannot function properly, and it doesn't take much carbon monoxide to be a problem. As little as 10 parts per million (0.001 per cent) can cause headaches, tiredness and slow reflexes. You will die if you inhale more than 200 parts per million of carbon monoxide for more than a few minutes.

Certain moulds, if left untreated, can also affect the quality of the air in enclosed spaces.

Where does air pollution come from?

Air pollution can come from a multitude of sources.

The number one source of air pollution is the burning of fossil fuels – primarily in our motor vehicles.  However industry and processing also send huge amounts of sulfur, nitrogen oxides, carbon monoxide, heavy metals, and particulates into the air.

Modern Industry and manufacturing is also responsible for pushing a whole lot of nasties in to the atmosphere. The exhaust from factories can consist of carbon monoxide, sulfur oxides, nitrogen oxides as well as organic compounds and other particulates. In countries such as Australia, a lot of work has been done to regulate, licence and control industrial emissions. Many developing countries do not have such tight regulation (if any at all), or if they do it may not be strictly enforced.

Smaller sources of air pollution, which may seem minor when taken in isolation but which when grouped together can cause major problems include wood smoke heaters, backyard incinerators, cleaning chemicals, paint fumes, even furniture and carpets. Most of our local air pollution problems are caused by us – and by the machines and chemicals we use.

While the majority of air pollution is caused by humans, nature can also play a part. Bushfires, volcano eruptions and dust storms are just some of the environmental issues that can wreak havoc on air quality, causing breathing difficulty, reduced visibility, service disruption (such as air-flights) and damaging plant and animal life. Often, the impact of ‘natural’ events are made more severe due to prior human activity. For example, farmers who over-graze their land or remove trees and shrubs leading to erosion can increase the severity of dust storms in the area.

Some countries have a problem with polluted air blowing in from the neighbours. In the 1980s Norway and Germany complained for many years about the dirty air from Britain's power stations blowing across the sea and poisoning  their forests and lakes with acid rain GLOSSARY . Thankfully for those countries down-wind of the UK, this issue has been addressed through the implementation of emission control strategies. In Australia we are luckier, because most of our pollution is 'home-made'. Not lucky because we have pollution, but because we can do something about it. By understanding the causes of air pollution better we will be able to improve things.

A shot of the Augustine volcano, March 2014, toward the end of its long eruption that lasted several months. Image source: U.S Geological Survey / Flickr.

The health effects of air pollution

In March 2014 the World Health Organization released new estimates that in 2012 approximately 7 million people died—one in eight of total global deaths—due to exposure to air pollution (both indoor and outdoor). This figure is more than double the previous estimates and confirmed that air pollution is now the world’s largest single environmental health risk. Improving the quality of the air has the potential to save millions of lives.

Few risks have a greater impact on global health today than air pollution; the evidence signals the need for concerted action to clean up the air we all breathe. Dr. Maria Neira, Director of WHO’s Department for Public Health, Environment and Social Determinants of Health.

Excessive air pollution is often a by-product of unsustainable policies in sectors such as transport, energy, waste management and industry. In most cases, healthier strategies will also be more economical in the long term due to health-care cost savings as well as climate gains. Dr Carlos Dora, WHO Coordinator for Public Health, Environmental and Social Determinants of Health.

Air pollution in Australia and around the world

Compared to many countries around the world, Australia has a very high standard of clean air. Despite this, approximately 3,000 people die prematurely each year due to air pollution in our country.

Our growing population, increased urbanisation, higher demands on transport (particularly air transport) and energy consumption all contribute to higher levels of air pollution.  Climate change is also predicted to affect air quality into the future. If emissions are not reduced, data modelling indicates that post 2030 there will be significant increases in summer smog (ozone), while an increase in the frequency of droughts would lead to a rise in particle air pollution as a result of more bushfires and wind-blown dust-storms.

At present each state and territory monitors its own air quality, with varying rules and regulations.

On a national level there is now agreement to work towards establishing a National Clean Air Agreement. The agreement, which is hoped to come in to effect on 1 July 2016, will aim to coordinate cooperation between industry and government at the national, state and local level to reduce air pollution and improve air quality. A range of existing, new and complementary measures will be included in the agreement to improve Australia’s air quality.

Globally, the situation is more serious. A 2013 World Health Organization (WHO) report found that almost 90 per cent of people living in the world’s cities are being exposed to dangerous levels of pollution. The report, which covered 91 countries and 1,600 cities concluded that only 12 per cent of people were living in cities that met with WHO air quality guideline levels.

The concentration of air pollution is measured in micrograms per cubic metre of air (µg/m³).

The pollution particles may consist of smoke, dirt, pollen, mould or other substances. The small size is an important factor in delivering the particles into the lungs; where the chemicals on these fine particles can trigger the negative health impacts.

The table below lists the ten countries with the highest recorded levels of air pollution in 2014.

Each country had different causes for its air pollution but they included high rates of construction and air traffic (Qatar), diesel generators and the burning of tires and plastics for fuel (Afghanistan), substandard gasoline and traffic congestion (Iran), increased cars, factories and power plants (Egypt), the burning of coal (Mongolia), oil and gas industries (UAE) and energy production and industrial emissions (Bahrain).

The most polluted city in the world was Delhi, India, with a recorded air pollution PM2.5 rate of 153 µg/m³.

Beijing, which regularly makes the news for its dense smog, was ranked 77th on the list.

Who is affected by air pollution?

Air pollution affects everyone but there are some groups—babies and young children, the elderly, and the poor and disadvantaged—that are more susceptible to its adverse effects than others.

Children tend to be more vulnerable due to their immature lung, immune and metabolic systems, increased time spent outdoors, and their susceptibility to colds and flu. The elderly often have weaker immune systems and other health complaints that can be exacerbated by air pollution.

Many of the world’s poor and disadvantaged live in conditions that increase their exposure to air pollution. Living in slums, close to public transport or industrial areas, or in dwellings without proper ventilation or sanitation can result in inhabitants inhaling much higher levels of air pollution than their more economically well-off neighbours. 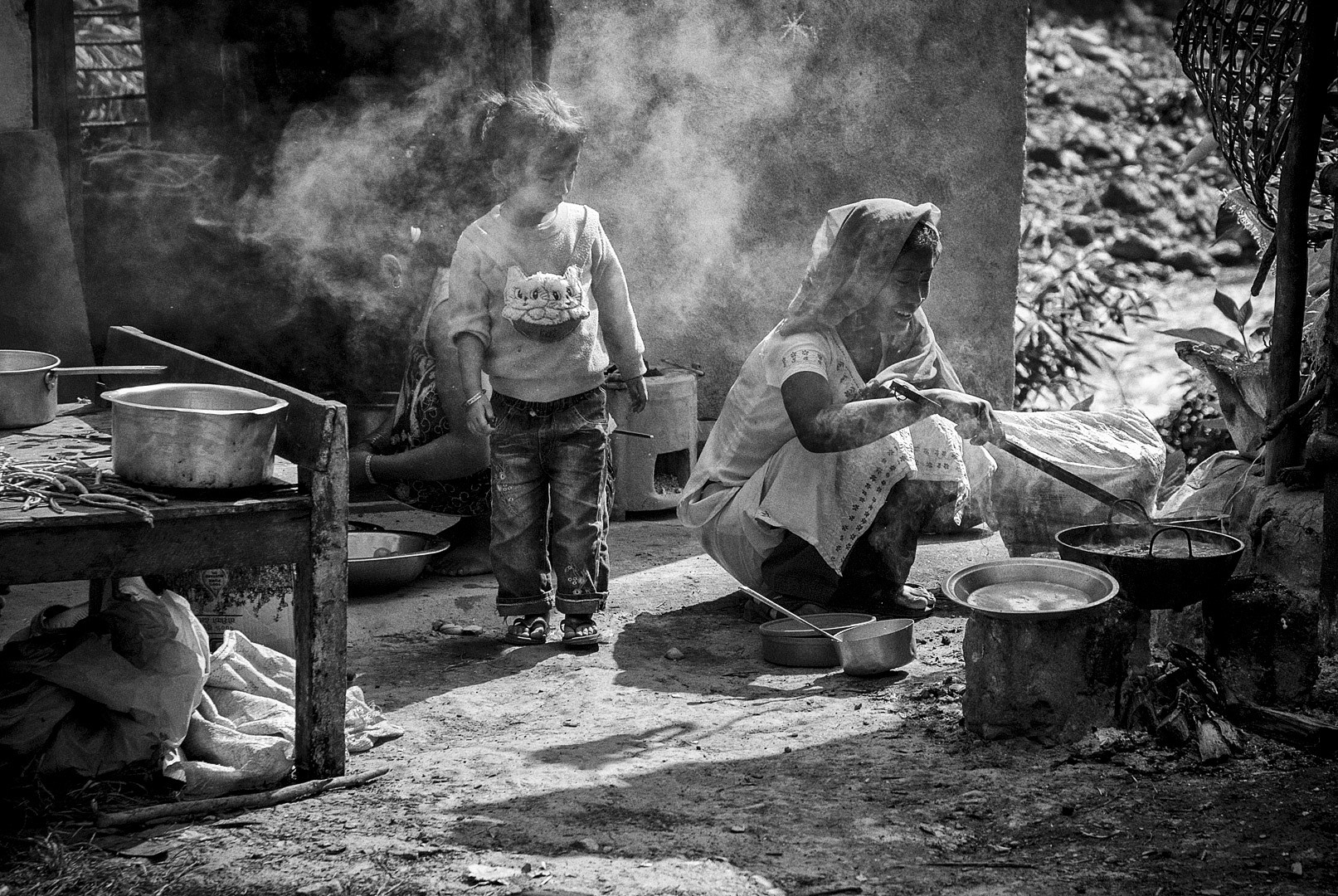 A woman and child cooking in the street over a wood stove, Nepal. Image source: Thomas Renken / Flickr.

From sore eyes to difficulty breathing, to the more serious health risks of stroke or cancer, nearly all of us will be affected by air pollution at some point in our lives. The immediate health effects, as well as the visual pollution, are obvious, but the continuous lifelong exposure to low levels of atmospheric pollutants is still unknown.

Public awareness of air pollution and its risks is growing, but it is the financial implications – on our health, tourism and environment that are finally spurring many governments around the world in to action.

The one positive to air pollution is that we have the power to significantly reduce, or even to stop it, by changing our behaviours. On a national level, governments need to take a leading role, including committing to moving away from fossil fuels to renewable sources of energy, supporting technologies for cleaner motor vehicles (electric or battery cell), and enforcing emission reduction targets for industry. On a more localised level, we can better insulate our homes to reduce the need for wood-smoke heating, use public transport where possible, plant trees, support companies who are environmentally friendly, and aim to lower our own levels of consumption, amongst other things.

There are already a lot of positive steps being taken in this regard, but more can be done. If everyone makes small changes, we may eventually be able to step back, admire the clean air all around us, and breathe a sigh with relief. But don’t hold your breath – action needs to be taken now.

See our infographic on air pollution.

Population and environment: a global challenge