Explosions from the sun can affect life, the environment and technology on Earth.

The University of Sydney

Our sun is a tumultuous nuclear powerhouse … it’s good that it’s far away. But, sometimes, far away may not be far away enough. From time to time it ejects fiery packages of matter and radiation—events known as ‘solar storms’—which can wreak havoc on our planet.

The largest recorded solar storm to hit us was in 1859. Known as the Carrington Event GLOSSARY Carrington Eventthe largest recorded solar storm to hit Earth, named after English astronomer Richard Carrington, who observed and recorded the solar activity , it was so powerful that it caused chaos for the telegraph system: it gave telegraph operators electric shocks and some telegraph poles sparked and caught fire. It also caused aurorae GLOSSARY auroraeSingular: auroraspectacular dancing ribbons of light seen in the skies, most common near the north and south poles. They’re also known as the northern or southern lights, the aurora borealis (in the north) or the aurora australis (in the south). to span almost the entire world, with the southern lights being reported as far north as Queensland.

Some experts predict that a solar storm on this scale should hit our planet roughly once every 150 years. So, being over 150 years since the Carrington Event, we can’t help but wonder … what are solar storms, and what kind of damage could they cause today?

Far away and behind the cover of its blinding light, the dynamic nature of the sun’s surface can easily go unnoticed. But astronomers have been aware of sunspots GLOSSARY sunspotsdark regions on the surface of the sun for thousands of years, with some of the earliest reports by Chinese astronomers describing them as ‘bursting fires eating a chunk of the sun’.

Sunspots can be tens of thousands of kilometres wide, and they grow, shrink, move and disappear over time. They’re also one of the most easily observed indicators of the sun’s tumultuous activity: when there are many sunspots, the sun tends to unleash more violent space weather; when there are few sunspots, we’re generally safer.

What exactly are sunspots?

Despite being mostly hydrogen (91.2 per cent of its atoms), the sun isn’t a simple ball of gas. It’s made of plasma GLOSSARY plasmaone of the four states of matter (the others being solid, liquid, and gas) —and that plasma acts in differing, complex ways depending on whether it’s at the core GLOSSARY corethe very innermost layer of the sun, where nuclear reactions turn hydrogen to helium , the outer corona GLOSSARY coronathe very outermost layer of the sun, seen as an aura of plasma that extends millions of kilometres into space , or somewhere in between.

As plasma moves around inside the sun, it generates magnetic fields that extend far into space. Sunspots are the visual markers of where powerful magnetic fields have emerged from the sun’s interior.

Scientists do not yet fully understand the complex physics of the sun’s magnetic field. But we do know that when strong fields around sunspots interact with each other, solar material can be ejected into space—sometimes with the energy equivalent of a billion hydrogen bombs.

There are two main kinds of violent magnetic explosions that occur above the surface of the sun: solar flares and coronal mass ejections. They can (but don’t always) occur at the same time, and they produce different effects.

Solar flares
Solar flares are explosions of light and energised particles. When seen with a solar filter GLOSSARY solar filterSolar filters reduce the brightness of the sun and make it possible to observe it without damaging our eyes. The sun can be observed in different wavelengths of light, allowing us to see different features. on a telescope, they can appear as a flash of bright light. (Yes, even brighter than the sun’s usual blinding light!) If they occur in line of sight from Earth, rather than on the other side of the sun, they will affect the space weather around us in as little as eight minutes.
Coronal mass ejections
Coronal mass ejections (CMEs) are clouds of plasma and magnetic fields hurled into space. At their extremes, they can contain hundreds of billions of kilograms of matter accelerated to several million kilometres per hour. These clouds can take up to three days to reach Earth if ejected towards us—but, unlike solar flares, not every CME seen from Earth will affect the environment around our planet.

When looking at images of the sun, flares appear as bright flashes, and CMEs are seen as ejections of matter.

Solar flares and coronal mass ejections (CMEs) can (but don’t always) occur at the same time. The footage below shows how these different events can look. 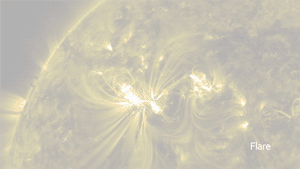 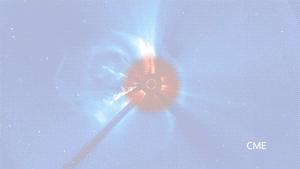 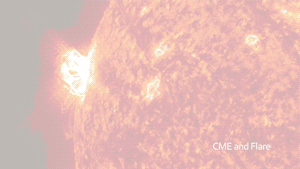 What follows these explosions are storms around Earth—but not our usual kinds of storms. Despite the extreme heat of the sun, we don’t experience a heatwave. And despite the fact that the eruptions travel through the solar wind GLOSSARY solar windthe stream of particles emanating from the sun, explained in more detail below , the result isn’t a windy event like a cyclone or tsunami. Solar storms are unlike the strong rain, wind and lightning events we usually think of as ‘storms’. Instead, they come to Earth in two main forms: radiation storms and geomagnetic storms. Both manifest in different ways, so let’s take a closer look.

Luckily, our atmosphere absorbs those fast-moving particles that make it through the magnetosphere, so we don’t need to worry about the radiation risk … assuming we’re on the surface of our planet.

If you’re an astronaut, particularly if you’re far away from Earth (perhaps on your way to Mars), you may be outside the protective zones of the atmosphere and magnetosphere. This means there’s an increased radiation exposure risk for astronauts after a solar flare, and passengers and crew in high-flying aircraft at polar latitudes may be at increased risk too. That said, life-threatening radiation events are rare, even for astronauts in deep space.

For those of us elsewhere, even the most extreme solar radiation storms won’t affect us biologically. But if we’re unprepared we’ll almost certainly notice their effects on our technologies. Solar energetic particles can interfere with radio communications and damage electronic circuits. Again, however, these charged particles don’t tend to make it to the surface of our planet—but satellites in high latitudes or located far from Earth’s surface can be at risk. If satellites cannot be moved to safer locations or shut down to a safe power mode, solar radiation storms may render them useless (temporarily or permanently). Losing satellite and communication systems is more than just an inconvenience for our lives and our economy; it can have real life-and-death consequences—like when trying to land an aircraft safely, or trying to activate an emergency beacon if you’re lost at sea or on land.

Have you ever seen an aurora? If so, you’ve probably witnessed the result of a geomagnetic storm, the largest of which are caused by CMEs. Aurorae are produced by energetic particles in Earth’s magnetosphere, caused by an exchange of energy between the solar wind and the space environment around Earth.

The solar wind and solar magnetic field rush past the Earth’s magnetic field during a geomagnetic storm. The resulting interaction energises particles circulating within the magnetosphere. These particles travel down magnetic field lines where they collide with gases in the atmosphere, producing the colours we see in the skies. The brightest aurorae are concentrated in an oval-shaped ring of light around the north and south pole.

Geomagnetic storms are more than just beautiful. They cause increases in electric currents flowing in our magnetosphere and upper atmosphere. These energies can induce current in electrical systems on the ground—like how electric toothbrushes charge even though there is no metal circuit connected—and can put electrical systems (including power grids) at risk of damage or malfunction.

If power systems are left running during extreme geomagnetic storms, transformers can be destroyed. If local, national and international power systems are interconnected, the damage can cascade … and, if hundreds of transformers are destroyed at once, the time needed to replace the equipment could lead to blackouts that last long beyond the duration of the storm.

Imagine large cities without power for a week, a month, or a year … the losses could be $1 to $2 trillion [US], and the effects could be felt for years.Daniel Baker, University of Colorado

Other potential effects of geomagnetic storms include disruptions to radio communication, reduced accuracy of satellite navigation systems, malfunctions of electrical systems, and possible confusion among the diverse range of animals who use Earth’s magnetic field for navigation.

Tracking storms and preparing for impact

Most of today’s solar storms cause no harm, and you might even welcome them if you enjoy the sight of aurorae. But, with the damage that severe storms can cause, it’s worth keeping watch.

Unfortunately, we don’t yet understand the physical mechanisms of the sun well enough to accurately predict when big solar flares or CMEs will take place. But we at least know that we should be on higher alert when there are more sunspots—and sunspot activity tends to occur in cycles.

Every 11 years or so, the poles of the sun flip—north becomes south, and south becomes north. This happens as the sun’s magnetic fields move, stretch, twist and cross each other, although scientists don’t yet know why this happens.

The most recent solar maximum was around 2014, and the next one is expected to happen around 2025… so that’s when we should probably be on highest alert. That said, severe space weather events can occur at any time, and minor events occur quite regualrly.

In 2012, the sun emitted a huge CME—one that could have been even stronger than the Carrington Event. Fortunately, Earth was elsewhere in its orbit as the plasma ripped through space. If the storm had erupted about a week earlier, it would have hit Earth—and the estimated cost of the damage that would have ensued is around 20 times that of Hurricane Katrina.

Solar activity forecasts and warnings are provided through services such as the Bureau of Meteorology’s Space Weather Services (in Australia) and the National Oceanic and Atmospheric Administration’s Space Weather Prediction Center (in the United States). When a large CME is spotted, satellites can be moved or powered down, power grids can be switched to safety modes, transformers can be temporarily disconnected, polar flights can be rerouted or postponed and, as individuals, we can switch off our electronic devices and prepare for blackouts.

The solar storm of 1859 disrupted the telegraph system. The face of our world has shifted markedly since then, with more than just telegraph operators tethered to electricity. This is one reason why it’s so vital to watch and understand the activity of the sun today … widescale blackouts, damaged circuits and electric malfunctions could have a huge effect on our modern lives. With enough people working on these problems, our knowledge of the sun and the resilience of our power systems will improve over time, making us better able to protect ourselves from the powerful solar storms that tear through space.

Is Earth safe from asteroids and comets?

From sunlight to electricity

The Goldilocks planet: why Earth is our oasis