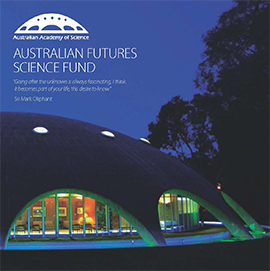 A bequest is a special gift that we preserve as your legacy. It is a wonderful opportunity to ensure that the Academy remains a part of the lives of future generations.

The Australian Academy of Science’s Australian Futures Science Fund allows the Academy to continue to champion Australian scientific excellence, promote and disseminate scientific knowledge, and provide independent scientific advice for the benefit of Australia and the world.

As a supporter of the Australian Futures Science Fund, you will help to create a legacy that will not only guarantee the Academy’s independence, but will continue to foster, celebrate and promote scientific excellence in this nation for generations to come.

For a confidential discussion about naming the Academy in your will, please contact the Bequests Manager:

Recently the Academy received two bequests - one was directed to a specific activity where the donor had intimate knowledge and commitment to the Academy’s education programs. The other was directed to the Australian Futures Science Fund which supports the future work at the Academy as prioritised by council.

We were notified about one of them, the other was a complete surprise. At opposite ends of the spectrum in magnitude and purpose, they’ve helped the Academy to consolidate support for existing projects, and start others from scratch.

We are grateful to receive them and honoured by their trust in the Academy’s commitment to supporting science in Australia.

Recently, Professor Michael (Mike) Dopita AM FAA met with Academy staff to advise of his pledged bequest to the Academy.

As a former treasurer, Mike has an appreciation of the Academy’s needs.  The pure delight with which Mike spoke of his pledged bequest and his deep understanding of the Academy’s needs were obvious.   Mike’s bequest represents a significant donation, one that is not tied to a specific activity of the Academy.  By giving to the Australian Futures Science Fund Mike’s gift will allow us to advance our work.

In my over 6 years as Treasurer of the Academy, I was constantly amazed by the enthusiasm, professionalism and dedication of the staff. They work to educate the general public on key issues such as climate change and the need for vaccination, labour tirelessly to instil a knowledge and understanding of science at both primary and secondary levels as an investment in Australia's future science literacy, build Australia's connections and standing with our international peers, and lobby and cajole Australia’s politicians to help develop more rationalpolicies with respect to science, STEM education and renewable energy.

At the same time, in my function as Treasurer, I was acutely aware of the limitations on our ability to act placed upon us by our budgetary limitations, and on more than one occasion a promising initiative could not be developed due to a lack of funding.

This is where bequests could help. Too often, the temptation of a giver is to memorialise one's own field of science, through striking a medal or creating a special purpose fund. This is eminently understandable, but does not greatly assist the functioning of the Academy in the long run. What is desperately needed now are untied donations which can be used for whatever purpose Council or EXCOM requires to develop the core mission of the Academy. For this reason, I have now made a binding bequest to the Academy of Science designed to add to the Australia Futures Science Fund, in the sure knowledge that the money will be well-spent in securing a more healthy, literate, rational and science-driven future for all Australians.

As a supporter of the Academy of Science’s Australian Futures Science Fund, you will help to create a legacy that will not only guarantee the Academy’s financial independence, but will continue to promote scientific excellence in this nation for generations to come.

Secretary for Physical Sciences 1980-84, Chair of the committee overseeing the development of the Academy project for primary-school science, Primary Investigations.

The late Professor Neville Fletcher spoke at the launch of the Academy’s First Steps in Science and Technology booklet in November 1991. In that speech he said: “The only way that you are going to get young people to take science seriously is if there are people teaching it effectively in primary schools from the age of four, five or six. By the time they get to 12 or 13, forget it.  It’s just another part of the curriculum and it’s a difficult one.”

Twenty-four years later, the Academy has made great strides in educating our young children in primary schools and Professor Fletcher made a valued gift to the academy in his will to ensure those efforts continue into the future. 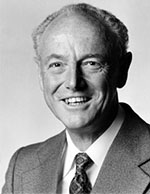 A Primary Connections’ donor says his interest in science, and in organic chemistry in particular, was fostered by outstanding teachers at school and university.  ‘As a pioneer in the field of insect chemistry I was able to build up a substantial team of higher degree students and research workers from the early 1950s.

‘At the Academy, I have strongly supported projects focusing on science education and recently, the extensive teacher training to the Primary Connections Program. Not only good text, but good teaching is essential at all levels.’

Support like that of the late Professor Cavill FAA will ensure that the Academy continues to provide the opportunities for our primary school teachers and their pupils to receive the very best science education possible.