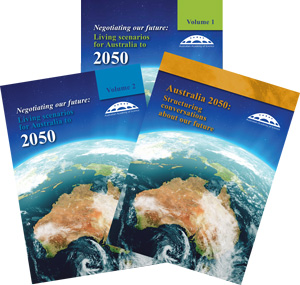 The ambitious 2050 project aims to get people talking about Australia's future.

The Australia 2050 project aims to get people talking about Australia’s long-term economic, social and environmental future. The final publication, ‘Structuring conversations about our future’ was the culmination of an ambitious five-year project to find ways to foster national discussion about future scenarios for Australia with experts from science, industry, commerce, government, community, sports, arts and social welfare. The publication offers a roadmap for groups of any kind, anywhere, to have constructive conversations about the future they want based on comparing four starkly different scenarios.

Read more about the Australia 2050 ‘Negotiating our future’ project