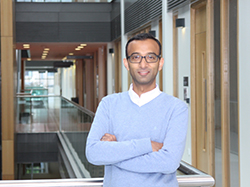 It truly is funny where life can sometimes take you as an early-career researcher. For example, never in a million years did I think I’d end up in a small, beautiful little town called Cork in Ireland to work in one of the world’s leading stress-research labs under the supervision of Professor John Cryan, a pioneer in this field. It’s a far cry from the hustle and bustle of Melbourne where I trained as a behavioural neuroscientist. But as every other ECR would now tell you, travelling overseas to further your academic career is the norm these days.

I was bitten by the science bug around about the time when my dad was doing his PhD in chemical engineering at the University of Newcastle. My parents couldn’t afford to put my brother and I through childcare back in those days so my dad would take me into the lab and I’d just watch him work away. I also remember very vividly him dictating his thesis text to my mum who typed it all out on a typewriter. Shortly after, we moved to Adelaide where he was a postdoctoral researcher at the University of Adelaide. I didn’t get to see him work much then but he knew I’d been bitten by then and bought me my first electronics and chemistry kits. Fast forward a few years, after high school graduation, I told my dad what I wanted to do. He gave me the best piece of advice which I’d offer to anyone considering a career as a scientist. Have a strong back-up plan in case things go south and very often they will, he said.

So I studied to become a pharmacist. I obtained registration and then, without hesitation, I applied for and obtained a PhD position at Monash University. Under the supervision of Dr Daniel Malone, I investigated the behavioural pharmacology of cannabidiol, a derivative of the cannabis plant. The focus was to identify whether this cannabinoid had any antipsychotic potential. If I had to tell you what drew me to this specific research topic, I think it was two factors. Firstly, the idea that a plant with such a negative reputation has a therapeutic constituent was incredibly intriguing. It was a novel concept at the time and I knew that the publications to come out of my research would have an impact. Secondly, the topic presented me with the unique opportunity to bridge my professional training as a pharmacist who encountered patients suffering schizophrenia, with the knowledge I was to gain as a schizophrenia researcher. I found myself more knowledgeable about this psychiatric disorder as well as others and I was able to provide mental health counselling services to the patients I encountered. (Yes, I worked part-time as a pharmacist throughout my PhD because we all know the stipends don’t cut it.)

By the time I finished up at Monash, I’d established a good foundation. I was then offered a postdoctoral position with Professor Maarten van den Buuse at the then newly established Florey Institute of Neuroscience and Mental Health. While I didn’t get the chance to continue my research on cannabidiol, Maarten did give me the exciting opportunity to work on transgenic rats to further understand the neurodevelopmental risk factors associated with schizophrenia. During my time at the Florey, I applied for various fellowships including those offered by the NHMRC. But I was unsuccessful on all attempts to secure my own line of funding and eventually due to funding constraints I lost my position as a researcher at the end of 2013. I remember how tough a day it was to pack up my things and leave research.

Fortunately, my father’s advice came in handy. I returned to work as a pharmacist full-time to keep the wheels moving. I’d not given up though. I sent off countless job applications far and wide throughout 2014 and was interviewed by several high-profile labs. It wasn’t until October when I was finally offered a position with John’s lab at University College Cork to investigate the role of non-coding RNAs in the context of stress-induced psychiatric disorders. But to make the move all the way from Melbourne wasn’t easy, especially for my wife who is absolutely obsessed with Melbourne. It took a bit of convincing and lots of promises, some of which I’m yet to fulfil.

Shortly after moving to Cork, I applied for and was successful in getting the prestigious Marie-Sklowdowska Curie Actions Individual Fellowship. Over the next two years this EU-funded program will allow me to pursue my current research interest which is to identify the biological factors which promote resilience in the face of stress. I am a member of an amazing team of scientists from around the world and we all work together in a collaborative spirit. The university has an excellent outreach program which emphasises the need to inform the public of the research that is being done and how the knowledge gained will be used to improve society. As such, I am continuously given valuable opportunities to both educate and inform members of the public. This is something that I never got much of a chance to do back in Australia but I hear things are now changing which is great.

It’s been a struggle to get to where I am right now in this stage of my career and I’m sure there are struggles I’m yet to face. Compared to some of my friends and family members, I have a very uncertain career path ahead of me. But there’s a certain thrill about working in science that I don’t think I’d find doing anything else in my life. It’s cliché but it’s true. I might never attain the fame or glory of the giants in my field but every day I go into the lab, I get an intellectual rush and feel motivated to find answers to questions which could hopefully have a positive impact on the mental of health of society.