Getting to know…. Hamish Clarke 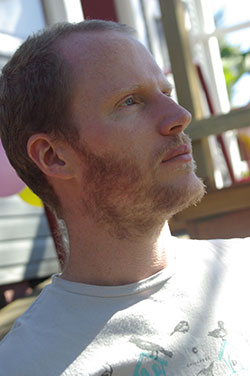 If I had to describe my career arc in a word, I'd say unconventional. Or to be a proper scientist, non-linear.

Growing up, I wasn't a chemistry lab kid, or a build it yourself kid, or particularly outdoorsy. But I liked animals and nature and space and dinosaurs and I loved reading and I loved learning. I still carry those loves with me to this day.

In high school I did 4-unit science, but for some unknown reason I enrolled in a business degree. It wasn’t a complete non sequitur: I loved languages and my course allowed me to live in Germany for a year. I did a combined Bachelor of Business, Bachelor of Arts in International Studies at UTS majoring in marketing, and accounting. I ultimately felt unsatisfied by arguments that always ended in 'to increase profits.'

But I became fluent in German, and competent in Spanish. (I regret my neglect of languages since those days. And computer languages don’t count!) I also studied some physiology and biochemistry.

I decided to enrol in a science degree upon my return to Australia, at the University of Sydney. I ended up taking a short break due to study fatigue, but returned with renewed energy the next year. Studying science was a revelation. The teachers were great, the material was fascinating. I always sat up the front, asking questions, taking notes, being one of those annoying mature-age students.

I majored in biochemistry and neuroscience. I did honours under Peter Gunning at the Children's Hospital at Westmead, in the Oncology Research Unit. It was my first experience in a 'wet lab' and I took to it like a duck to the desert. I probably enjoyed writing the thesis more than the countless hours I spent looking down a microscope at stained cytoskeletal proteins in neuronal growth cones harvested from embryonic mutant mice. Although it was the next logical step, given my experience I couldn’t commit to a PhD.

I decided to enter a different kind of institution—the public service. Science still existed within a small number of departments and I liked the idea of working in the public interest. My wife and I were offered graduate positions in Canberra and Sydney, and I joined the NSW Department of Environment and Conservation.

Little did I suspect I would remain there for almost 10 years. Sadly, science wasn’t part of the graduates program, but I enjoyed my stints in regulation, administration and public affairs. It was really interesting being part of the executive arm of Government. I jumped off the program into a job in climate change policy. The work ended up being largely administrative, but while on the job I met a straight talking ecologist who headed up the climate change science section.

As luck would have it, he was looking for a junior scientist, someone to be a jack of all trades. This was me all over—being paid to learn, not having to be stuck doing one particular thing, and of course working with this manager who I liked and respected.

It was a fantastic time in my career. Learning on the job, meeting new people, working on something topical, important and science-related. I was encouraged to do a PhD—on company time! It was too good an offer to refuse, so I began a lengthy search for projects and supervisors. I settled on Andy Pitman at UNSW Australia and began a PhD looking at the impacts of climate change on bushfire risk, particularly fire weather conditions.

Andy was a fantastic supervisor: supportive, available, influential. I worked out of UNSW one day a week. There was a great group of academics and students there, although I never really felt fully part of the centre because of my scant hours. The feeling of being an outsider—often willingly—has been another recurring theme in my life and career.

Part way through my PhD the department had a restructure. My manager decided to leave, most staff left and we joined the group that monitored and researched air quality. We still had some high profile climate change projects, but I began to consider the next stage of my career. It was with some relief that I finished my PhD in early 2015, five years after beginning.

From the period of submitting my PhD I began an intensive process of researching and searching for work. I was attracted to multidisciplinary teams, work with an end user focus, work with a strong communications and engagement focus, work in the public interest. An opportunity came up to do a postdoc in a great group I had already collaborated with, based out of Wollongong and Western Sydney universities. The work would be similar enough to what I'd already done to make me competitive, but different enough to be an appealing learning opportunity. It also marked the first time I'd ever been a scientist in academia.

At 37, I am an experienced scientist, but I haven't stayed in the same field for more than a few years. I’m inching towards my dream job, whatever that is, but I’ve already figured out a lot about what I enjoy and am good at. I've never had just one science outlet. I’ve always got a book on the go. I’ve worked as an editor, transcriber and freelance writer (for the popular science magazine Cosmos). I've given talks to community groups on climate change.

I’ve been to great events like Science Meets Parliament and the Australian Academy of Science's Science at the Shine Dome. I met a physics postdoc with a similar passion for informal, engaging science communication and we begun recording short pieces of snappy science, some of which were played on Radio National's The Science Show. In late 2014 a science teacher (my basketball teammate!) and I started a Science in the Pub series in the Blue Mountains, still going strong today. And I’ve now got another awesome science outlet in the EMCR Forum.