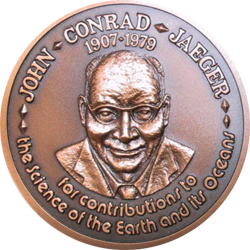 The Jaeger Medal is made in honour of the contribution of the late Professor John Conrad Jaeger, FAA, FRS, to Australian Earth science. The award is made to a scientist for investigations of a high order into the solid Earth or its oceans carried out in Australia or having some connection with Australian Earth science. Although work carried out during a candidate's entire career will be taken into consideration, special weight will be given to recent research. The award is normally made every two years.

NB: NB: Candidates may be put forward for more than one award. If a proposed candidate is already the recipient of an Academy award, the second award must be for a distinct, additional, body of work undertaken since the first award, and/or work in a different field.