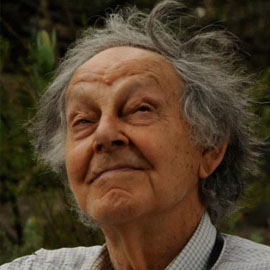 Professor Adrian Horridge is distinguished for the combination of electron microscopy, neuro-anatomy and electrophysiological analyses of coordination in invertebrates. Early examples were the analysis of medusae, the first electrophysiological demonstration of pitch discrimination in an insect, the discovery of a preparation for the study of learning by the ventral cord of a headless insect and the discovery that chaetognatha feed by vibration receptors. Recently work on the compound eye led to the discovery of an optokinetic response to the sun's movement, several new types of insect retina and a study of the accuray of synaptic connections in the projection of the fly's eye. This varied experience, and its philosophical basis, is summarised in a recent book "Interneurons". Also a book with T. H. Bullock is the standard reference work on invertebrate nervous systems.