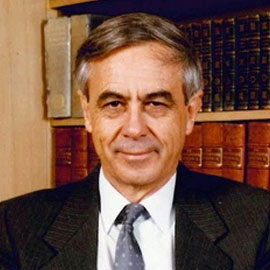 Professor William (Bill) Compston is distinguished for his work in isotype geochemistry and isotopic age-dating and in developing geological and intrumental techniques for this purpose. He was responsible (jointly with P. M. Jeffery) for recognising that certain types of igneous rock may remain closed systems for rubidium and strontium during metamorphism and thus introducing the total-rock method of rubidium-strontium dating now so widely used. A second important discovery is that the age of deposition or diagenesis can be recorded in shales, thus opening up the possibility of dating Precambrian sediments by Rb-Sr methods. He has been the driving force behind the programme for dating the Australian Precambrian. On the instrumental side, he has developed statistical methods of determining Rb-Sr isochrons and has developed the important double-spike method for correcting mass-discrimination during the isotopic analysis of lead.