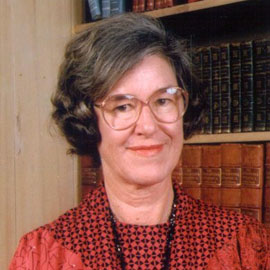 Anderson is distinguished for her outstanding contributions to the understanding of the molecular organization of the chloroplast thylakoid membrane. She was associated with N.K. Boardman in achieving the first physical separation of the photochemical systems of photosynthesis. Dr Anderson developed an improved method for resolving chlorophyll protein complexes, and applied it to an analysis of thylakoid membrane fractions, representing the unstacked and stacked membranes of the chloroplast. She demonstrated an extreme lateral heterogeneity of the chlorophyll-protein complexes and the photosystems between the stacked and unstacked membrane regions, and proposed novel concepts for the operation of the photosynthetic electron chain. She has done pioneering work on the pigment protein complexes of brown seaweeds.