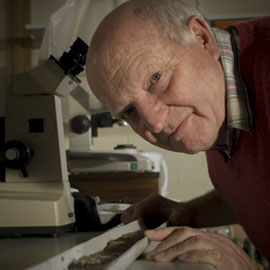 Patrick De Dekker pioneered the study of the Quaternary [last 2 million years] history of the oceans bordering Australia and principally used microfossils and their chemical composition to reconstruct past changes. He was also first in linking patterns of environmental change on land [through salt lake records] and at sea, again using microfossils and other proxies. He also found that the glacial oceans have become progressively warmer as aridity increased in Australia. His most recent innovative research deals with the microbiological and geochemical fingerprinting of airborne dust with the aim at linking dust events with changes in the oceans.