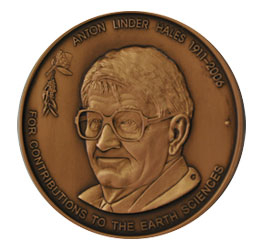 The Anton Hales Medal recognises research in the Earth sciences and honours the contributions to the Earth sciences by the late Professor Anton L Hales FAA. Professor Hales was the founding director of the Research School of Earth Sciences at the Australian National University.

Its purpose is to recognise outstanding contributions to research in the Earth sciences. It will be awarded to researchers up to 10 years post-PhD in the calendar year of nomination, except in the case of significant interruptions to a research career. The award may be made annually and is restricted to candidates who are normally resident in Australia and for research conducted mainly in Australia.

Background on Professor Anton Hales can be found through the related links below and his biographical memoir at Historical Records of Australian Science.