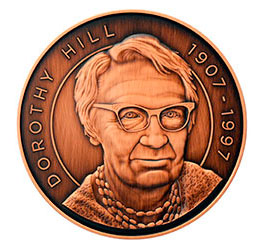 The Dorothy Hill Medal honours the contributions of the late Professor Dorothy Hill AC CBE FAA FRS to Australian Earth science and her work in opening up tertiary science education to women. Professor Hill became Australia's first woman Professor in 1959 when she became Professor of Geology at the University of Queensland. Professor Hill also became the first Australian woman Fellow of the Australian Academy of Science (1956), the Royal Society of London (1965), and she became the first woman president of the Australian Academy of Science (1970). The Academy acknowledges the generous sponsorship provided by The Geological Society of Australia, the University of Queensland, the Brisbane Girls' Grammar School, the Association of Australasian Palaeontologists, Rio Tinto and Woodside Energy.

The award supports research in the Earth sciences, by women researchers up to 10 years post PhD in the calendar year of nomination, except in the case of significant interruptions to a research career. An honorarium of $3000 is offered.

The award may be made annually, for research carried out mainly in Australia. It is restricted to candidates who are normally resident in Australia and who have the potential to further contribute to a better understanding of Australian Earth science.