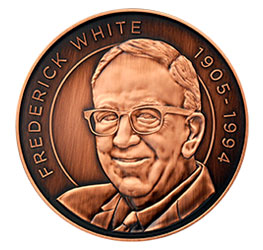 The 2022 nomination deadline is now closed.

The Frederick White Medal honors the contributions to Australian science of the late Sir Frederick White KBE FAA FRS. It recognises the achievements of scientists in Australia who are engaged in research of intrinsic scientific merit that has made an actual or potential contribution to community interests, to rural or industrial progress, or to the understanding of natural phenomena that have an impact on the lives of people. Relevant areas of research are physics, astronomy, chemistry, and the terrestrial and planetary sciences. The prize of up to $3000 (GST exempt) is awarded biennially to researchers up to 10 years post-PhD in the calendar year of nomination, except in the case of significant interruptions to a research career. The award is restricted to research conducted mainly in Australia.