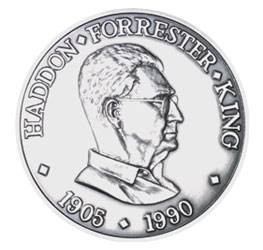 The 2022 nomination round is now closed

The Haddon Forrester King Medal, sponsored by Rio Tinto, is one of the Australian Academy of Science’s prestigious career awards for life-long achievement and outstanding contribution to science.

The award is made in honour of the contributions of the late Haddon Forrester King whose work applied the geological and related sciences to the search for mineral deposits in Australia and elsewhere. Haddon King joined Zinc Corporation as its Chief Geologist in 1946, became Director of Exploration for the merged Conzinc Rio Tinto of Australia (CRA) in 1962 and continued in this capacity until his retirement in 1970. He was a consultant at CRA until 1986.

The Award is made to a scientist, resident in Australia or overseas, and normally awarded once every two years. It recognises original and sustained contributions to Earth and related sciences of particular relevance to the discovery, evaluation and exploitation of mineral deposits, including the hydrocarbons.

In addition to a medal presentation dinner, this award includes a $3,000 honorarium and up to $7,000 towards a short lecture tour highlighting their discoveries, research and achievements. The Medal and a lecture is presented at a dinner in the Awardees State capital.

The medal is made by The Royal Australian Mint, Canberra from silver provided by CRA Limited, and was designed by Ninon Geier, sculptor, Canberra.

NB: Candidates may be put forward for more than one award. If a proposed candidate is already the recipient of an Academy award, the second award must be for a distinct, additional, body of work undertaken since the first award, and/or work in a different field.