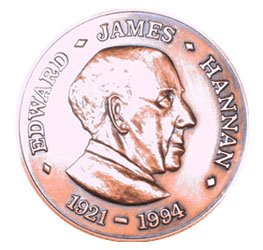 The Hannan Medal is a career award that recognises outstanding research in any of the fields of statistical science, pure mathematics, applied mathematics and computational mathematics and is made in one of those three areas in turn at two-yearly intervals. It honours the contribution to time series analysis of the late Professor E J Hannan, FAA, Professor of Statistics at the Research School of Social Sciences of the Australian National University.

The 2023 Hannan Medal is in applied mathematics and computational mathematics.

The 2025 Hannan Medal is in statistical science.

The award is made for research carried out mainly in Australia. Work carried out through a candidate’s entire career is taken into consideration but special weight is given to recent research. From the 2021 award round the Medal and a lecture will be presented at a celebration in the Awardees State capital.