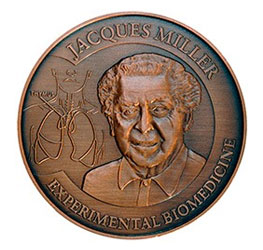 The Jacques Miller Medal for Experimental Biomedicine has been established to honour the contributions made to science by Professor Jacques Miller AC FAA FRS that include the discovery of the function of the thymus and the identification, in mammalian species, of the two major subsets of lymphocytes and their functions.

The award recognises research of the highest standing in the field of experimental biomedicine and is open to researchers eight to fifteen years post PhD in the calendar year of nomination, except in the case of significant interruptions to a research career.

Funds were donated by Lady Tania Feldmann and Professor Sir Marc Feldmann AC FMedSci FAA FRS to establish this award over a 20 year period. The award will be awarded annually from 2015 and biennially from 2019 and is restricted to candidates who are normally resident in Australia and for research conducted mainly in Australia.