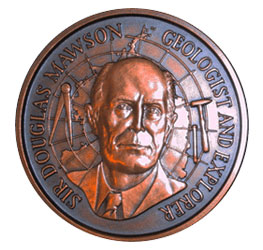 The 2022 nomnation round is now closed.

The Mawson Medal and Lecture recognise research in the Earth sciences and honours the contribution to science in Australia by Sir Douglas Mawson FAA FRS, geologist and Antarctic explorer.

From the 2022 award round the Medal and a lecture will be presented at a celebration in the Awardees State capital. The lecture is also delivered at the time of each convention of the Geological Society of Australia.

The medal is made by The Royal Australian Mint, Canberra and was designed by Dr Stuart Devlin AO CMG.