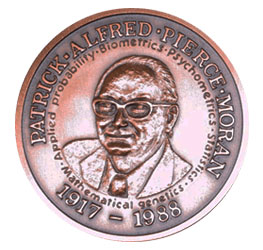 The Moran Medal recognises the contributions to science of the late P.A.P. Moran, FAA FRS. Its purpose is to recognise outstanding research by scientists up to 10 years post-PhD in the calendar year of nomination, except in the case of significant interruptions to a research career, in one or more of the fields of applied probability, biometrics, mathematical genetics, psychometrics and statistics. The award is normally made every two years. The award is for research carried out mainly in Australia.