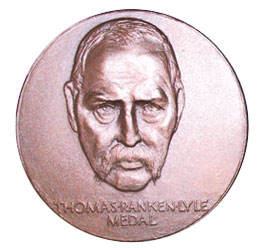 The Thomas Ranken Lyle Medal is a career award that commemorates the contribution of Sir Thomas Ranken Lyle, FRS, to Australian science and industry generally and in particular to his own fields of physics and mathematics. The purpose of the medal is to recognise outstanding achievement by a scientist in Australia for research in mathematics or physics.

Research carried out in countries other than Australia may be taken into consideration if the researcher has spent three of the last five years in Australia. Work carried out during the whole of the candidate's career may be taken into consideration but special weight will be given to recent work. From the 2021 award round the Medal and a lecture will be presented at a celebration in the Awardees State capital. The award is normally made every two years.

Awarded by the ANRC