Department of Health reaches millions with the Academy

Department of Health reaches millions with the Academy

When the Australian Government Department of Health wanted to create a public awareness campaign about immunisation, it partnered with the Academy. Together, the organisations designed a public health message with impact, distributed to an audience of millions.

The ‘Science of immunisation’ campaign, which commenced in October 2018, included six short-form videos and five articles designed to engage the unengaged. Topics included the safety of vaccines and a look at the ingredients that make up a life-saving shot. As with all of the Academy’s outreach content, each piece of communication went through a rigorous fact check and review by independent experts.

The immunisation campaign was so successful, it inspired the Department of Health to partner with the Academy for campaigns specifically about meningococcal disease and measles. The meningococcal campaign, in November 2018, encouraged the public to get vaccinated for the different strains of the disease.

The measles campaign was launched in early October 2019 with five videos and four articles. It has generated significant mainstream media coverage, while numbers from social media distribution are still building.

By combining scientific accuracy and excellence with a brilliant in-house video production and writing team, the partnership has generated a suite of compelling communication outputs with powerful messages. Then, by tapping into the social media distribution expertise and our Facebook audience of two million, these important public health messages have reached huge numbers of people and continue to be shared online.

Find out why Academy videos stand out and how you can partner with us to reach millions and develop unique science communication video campaigns. 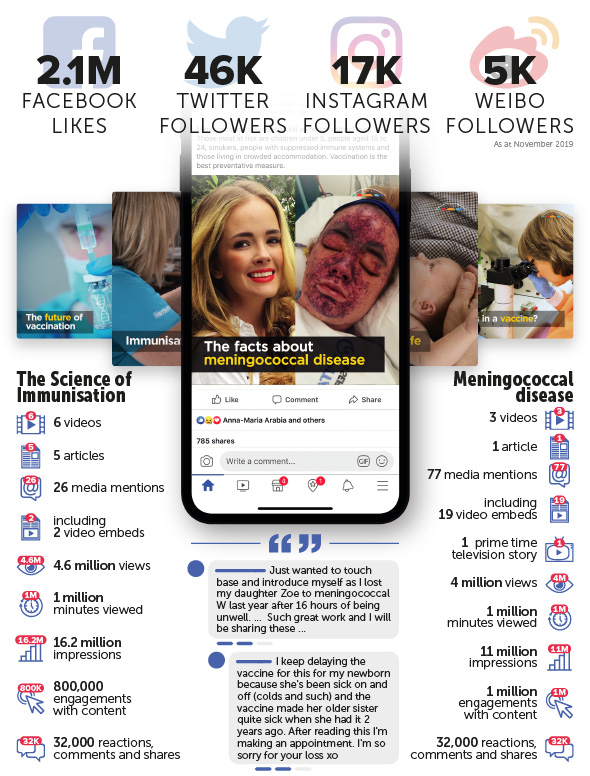 “Just wanted to touch base and introduce myself as I lost my daughter Zoe to meningococcal W last year after 16 hours of being unwell.  ...  Such great work and I will be sharing these ...”

“I keep delaying the vaccine for this for my newborn because she's been sick on and off (colds and such) and the vaccine made her older sister quite sick when she had it 2 years ago. After reading this I'm making an appointment. I'm so sorry for your loss xo”