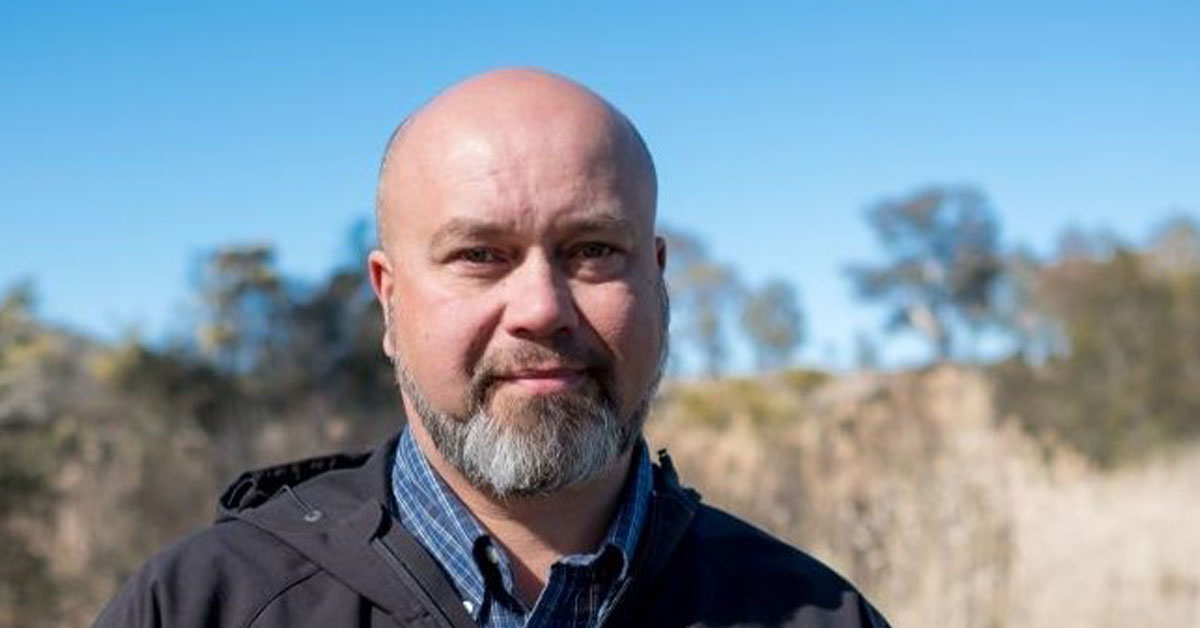 The award supported Associate Professor Moggridge, a PhD candidate at the University of Canberra, to visit Aotearoa/New Zealand to learn how they have incorporated Māori culture and knowledge into their water management practices.

As a result of the award and the visit to Aotearoa, Associate Professor Moggridge recently published a paper (as first author) about Indigenous Methodologies and engagement in water management in the journal Wetlands Ecology and Management.

The Academy spoke with him for NAIDOC Week.

“That was a great honour, especially getting that little blue tube with a certificate in it, with the Academy’s logo on it – that was cool. The presentation and the celebration of that, you sort of think, well after all the challenges and all the setbacks you’ve had, you know, this journey’s been worth it, just by winning such an award. And then obviously the cash component helped me travel to New Zealand.

“[The award] allowed me to talk to Māori on both the South and North Island, and it was amazing to see them and be with them on country, and there were little things – I was talking with one of the Iwi on the South Island and I said, ‘I’ve got this ethics document, you need to sign it’. She said 'I invited you to my bloody house. I'm not signing no ethics document.’

“A lot of their challenges are still the same as Aboriginal people in Australia. I think I talk about it in the paper, they’ve got their [treaty] settlements and they’ve got land and their compensation, but when it comes to water, [for example] the Waikato River is fully allocated, and the Waikato Tainui are restricted in entering the water market as it’s fully allocated, it’s a real challenge for them. The Te Arawa in Rotorua, they got the rights to seven or eight lakes, but they only got the rights to the lake beds. So, they don’t actually have the rights to the water.

“Connecting and [establishing] those networks for me are … Well, I try and maintain them, and I hope they’re forever. We help each other, we learn off each other and we share.”

What inspired you to study water management?

“[I found] connecting with water in general and science was exciting, because really what I was finding was that Indigenous knowledge – some of the oldest water stories on the planet that have been shared and passed down from generation to generation – have survived colonisation and policy and invasion and everything else.

“Water is always going to be very topical in Australia […] those thousands of generations of existence and survival wouldn’t have been possible without the knowledge of water, especially around where to find it, what time of year it was available, what were the indicators that suggested water was in the landscape on your country.

“Those stories existed, like the stories of moving to higher country when the sea level was rising at the end of the last ice age – those stories survive – stories of volcanism in Western Victoria – and they are stories of observation and experience.”

Your research explores those principles of co-designed science land and water rights and data sovereignty, which are hugely important for Australian science. How can other researchers apply those principles?

“Trust should be at the core – building that trust with communities, especially if you are going to engage in a research activity. And as you move through that partnership, protocols and the research agreement come out, you’ve got to go through ethics, but it’s then when you get down to the nitty gritty – how are you going to protect their intellectual property and what’s in it for them if they engage with you?

“So many researchers have got PhDs and masters and higher degrees by research from Aboriginal knowledge, and the Aboriginal people don’t get acknowledged. They’re not a co-author – they might get in the acknowledgement section or a personal communication as part of the research, but it’s their knowledge, but they’re not actually acquitted that right. You know what I mean?

“Because that’s what past generations got tired of, they’d tell their story and then all of a sudden, they lose the intellectual property to it. And now it’s a PhD, or it’s a story in a book, and I think modern-day researchers will find that those barriers are there.

“So, they’ve gotta break down those barriers to start those conversations. And my tip to a lot of researchers is the three Ts: TIME to build TRUST over lots of cups of TEA. And I have been advised that there is a fourth and fifth, you’ve got to have TIM TAMS.

“And then get to the point where your research might be able to answer their questions. No one’s ever asked them, ‘what are your questions you want answered?’ No one’s asked that […] that’s why I wanted to write this [Indigenous] research methodology paper.

“Climate change is a great example, or fire ecology, a great example of knowledge coming together with traditional knowledge, with Western science, and you’re getting a positive outcome because of that. In that regard you hope it’s either Indigenous led or co-led, and then you start seeing the benefits.”

You are on the Academy’s Reconciliation Action Plan (RAP) Working Group, and have been involved in other institutions work around reconciliation. What successes have you seen, and what would you most like to see next in the journey?

“Seeing Tom [Calma] as a Fellow of the Academy was exciting. And Jason Sharples is a Fellow of the Academy of Technology and Engineering, and Marcia [Langton] is an honorary Fellow. So those changes just there are significant. And then obviously seeing the Academy of Science’s Reconciliation Action Plan, it’s advancing and it’s doing good things. Having the [Aboriginal and Torres Strait Islander Scientist Award] increase in value, and some of the Fellows contributing to that and wanting longevity into the future is exciting. And that’s a real change.

“We’re seeing things happen, it’s starting to become normal. And that’s the aim of it is that you don’t have to be pushed to do it, you just do it. And I think that’s where the Māori are at because a lot of things just happen now: dual language is always everywhere and non-Māori people, Pākehā, they actually have a connection to a mountain and a river as well – the Māori story. So that’s where you want to be.

“I think the next one for me is for a number of years trying to push an Indigenous STEM network […] We’re hopefully going to have a gathering at the end of the year (2022). Eventually, we’ll build up and have support from universities and the academies, to actually network, get together, share support, mentor – all of those things that other networks do. There’s an Aboriginal dentist society – how have they got one and scientists don’t? But that’s all volunteering: It’s all after hours and behind the scenes on top of your work. Leaving our effort in demand and business unfinished, help a brother out Get up! Step up! Stand up!”

The 2024 Aboriginal and Torres Strait Islander Scientist Award will open in early 2023.

The Australian Academy of Science is committed to supporting excellence in science and empowering the next generation of scientists. This includes advancing reconciliation, creating opportunities to work respectfully with Aboriginal and Torres Strait Islander peoples, supporting their contribution to scientific activities, and increasing understandings of Indigenous knowledge. Learn more about our progress towards reconciliation.