Each year the Australian Academy of Science, with funding from the Science and Industry Endowment Fund (SIEF), supports a group of young researchers to attend the Lindau Nobel Laureate Meeting. This year, eight rising stars of Australian science were selected to attend the meeting in Lindau, Germany, in June.

Applications for EMCRs to attend the 69th Lindau Laureate Meeting, 30 June to 5 July 2019, are now closed.

The Australian delegation joined 592 other young scientists who met with Nobel laureates to present their research, exchange ideas and share experiences. These are some of our stories.

Lee Ashton, the University of Newcastle 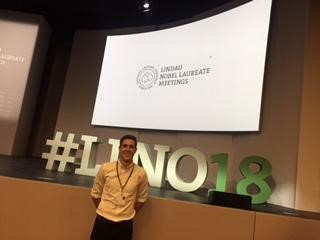 The 2018 Lindau Nobel Laureate Meeting was one of the greatest experiences I have encountered in my short research career. It was an incredible ‘once-in-a-lifetime’ opportunity and I feel privileged to have been involved. I acquired new friendships from all over the world, met with potential collaborators and, as the meeting’s motto suggests, I left the meeting feeling Educated, Inspired and Connected!

It was encouraging to see many of the Nobel laureates valuing kindness, openness and curiosity in science. Several of the laureates highlighted the importance that young researchers have in advancing science. Torsten Wiesel poetically said ‘Nothing is wasted, nothing is in vain: the seas roll over but the rocks remain—young scientists should keep looking for those rocks.’ As a result, I left feeling valued and with increased optimism to work hard, take risks and look for those rocks!

The meeting had a strong focus on encouraging young scientists to speak up and make our voices heard on important issues in science, research and society. For instance, Nobel laureate Peter Agre articulated that ‘we have a unique opportunity to make the world a better place’. I came away feeling inspired to address major issues, to make a difference in the world, and hope that I can contribute to helping human kind.

Yuan Zhou, the University of Tasmania 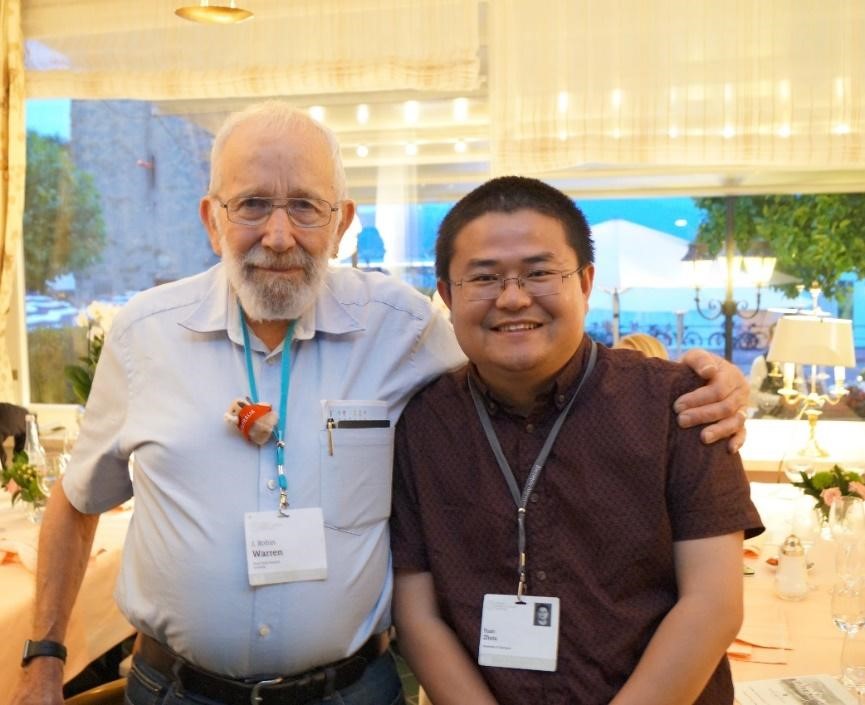 The week at Lindau was one of the most amazing moments of my life, one that will shape my future. Educate, Inspire and Connect was the theme of the meeting. Never, on any other occasion, will I have the opportunity to be educated by 39 Nobel laureates who have made ground-breaking discoveries that benefit the health of human beings. The open-minded conversions not only helped broaden my thinking but, more importantly, influenced my future research direction. For example, Harald zur Hausen, recipient of a Nobel Prize for the discovery of human papillomavirus, whose team recently discovered several novel circular DNA molecules in multiple sclerosis brain tissue. If validated, the findings may change our understanding of multiple sclerosis as an autoimmune disease, and this is something I would like to investigate in my own work.

The Nobel laureates were once called young scientists, who failed and were rejected many times. Some were even dismissed as their research was not in line with mainstream concepts that, after many years, turned out to be wrong. I was inspired by their curiosity, their willingness to take a chance with their ideas and the trust they have in their ideas. They play ultimately to themselves and the truth, not to some crowd or committee, and this attitude is one I shall aim to emulate.

Being a Lindau alumnus is a priceless resource for my future career development. Nothing is to be feared; it is only to be understood. There are exciting works to be done in the near future that will benefit multiple sclerosis patients.

Amy Shepherd, the Florey Institute and the University of Melbourne 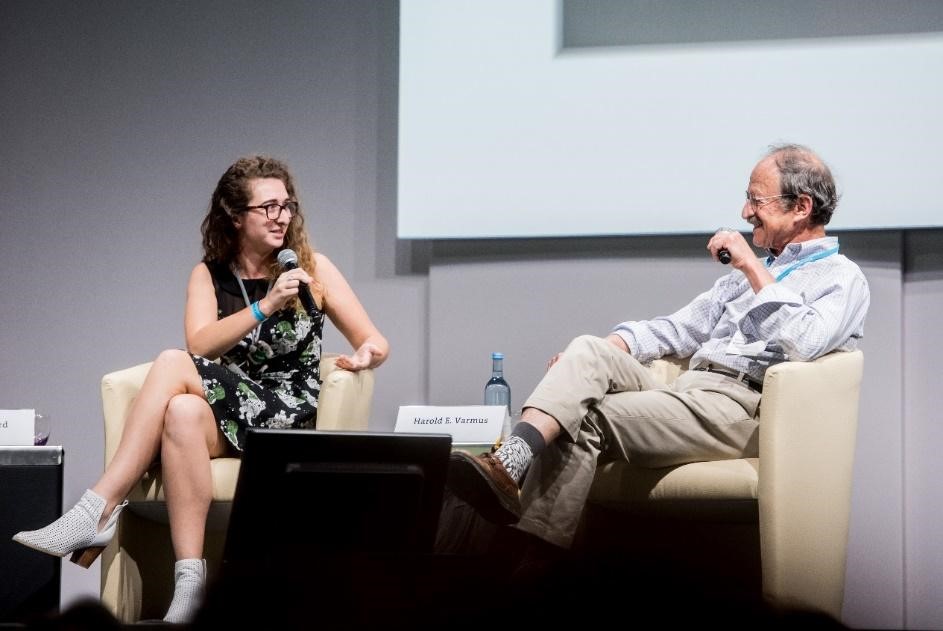 The Lindau Nobel Laureate Meeting was one of the most surreal experiences of my life. The chance to talk to some of the Laureates was a super exciting and it didn’t disappoint. From Richard Roberts’s impassioned talk on how the dangers of the anti-GMO campaign to Martin Chalfie’s joking advocacy for slightly sloppy science when starting something new. I learnt not about my specific branch of science but much more about the scientific landscape and our role in it as young scientists.

A question the laureates get constantly is ‘how do you win a Nobel Prize?’ But I think the much more interesting one is ‘what do you do IF you win it?’ A common theme was that after the prize you really are in the limelight and have a platform to make change. Two examples of Nobel laureates using their prizes to change the scientific community are Harold Varmus and Randy Schekmen, founders of PLOS One and eLife respectively, who I was lucky enough to be on a panel with, along with EMBO CEO Maria Leptin and Springer Nature CEO Daniel Ropers. We discussed the role of ‘publish or perish’ in shaping the careers of young scientists—a life changing and exciting experience that’s going to be hard to beat!

Most of all though, what I found the most inspiring and valuable was meeting the other young scientists, representing 84 countries, from different fields and with the life experience we’ve all had, which led to interesting and engaging discussions about specific scientific problems, from the scientific community to world issues. I was incredibly lucky to be part of the #LindauAussies and I think those friendships will last a lifetime. If you have the opportunity to go to this bizarre and wonderful meeting, I would highly recommend it.

Elena Schneider, the University of Melbourne

We all came to meet the Nobel laureates, of course. However, it quickly became clear that the young scientists were key to the meeting. Equal footing was given to science, as well as professional development, scientific history communication and fostering international collaboration. The laureate lectures and discussion groups followed the same principle, with topics ranging from bench science to life experiences and from improving science dissemination to flying the flag for important causes, such as GMO use, funding struggles and ‘publish or perish’.

In his discussion group, 94-year-old (!) Torsten Wiesel took us through his remarkable career path. As an MD, but no PhD, Wiesel, compelled by his brother’s illness, spent more than 40 years of his life exploring the visual cortex. When he was asked why he gave up his solid medical career to pursue a career in shaky science, the answer was very simple: to really understand the basis of medicine, he needed to explore science. Wiesel’s exact words were ‘If you find a nice flower in a forest, observe it. Don’t just pick it up and say “Look what I found!”’

Overall, this experience has been the highlight of my career so far. It surpassed all my hopes and expectations. There is so much more I could potentially include, from lunch with Peter Doherty, to making new life-long friends, to the dancing on the boat from Mainau. 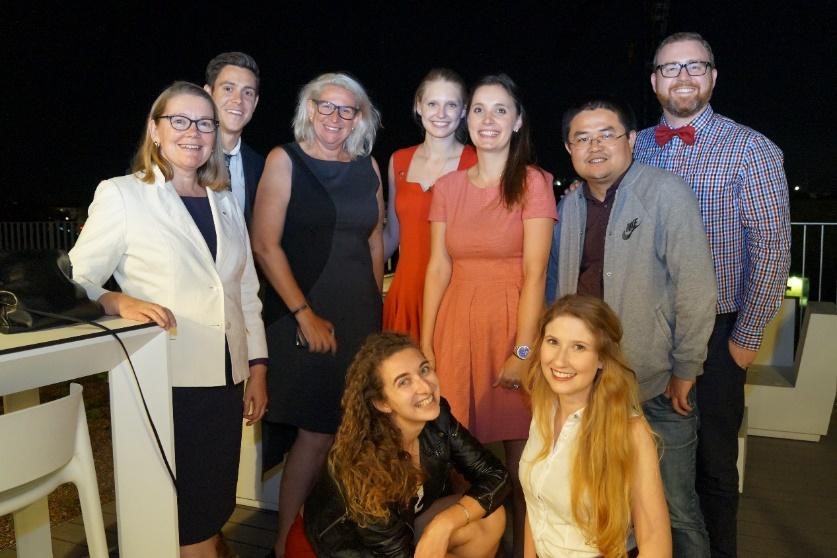 Looking back at my experience at the Lindau Nobel Laureate Meeting, my head is filled with grandiose adjectives and cliché expressions. I’m not thinking of these cynically or ironically though; I just can’t conjure up better words to describe it. Lindau was extraordinary, in every sense of the word.

It was unlike any conference I have ever attended. While there was lots of science to discuss, everyone came from such varied backgrounds that it was less about the scientific minutia and more about science as a whole—what we could do to improve it, to shape it, to promote it. What surprised me most was how genuinely delighted the laureates were to be there. They were getting mobbed by hundreds of young researchers and, instead of retreating as I probably would have done, they revelled in the exchange. I was fortunate to be one of 10 young researchers to have lunch with Robin Warren, who won the Nobel Prize for the discovery of Helicobacter pylori in gastritis and gastric ulcers. His work was an inspiration to me and is partly why I’m in infectious disease research. We talked about a wide range of things, including Robin’s love of photography. He then asked if he could take some photos of us! I never expected a laureate would want to take a photo of me, so that was an experience. The restaurant eventually had to kick us out after three and a half hours (around two hours longer than was scheduled). I am incredibly thankful for the support I received from the Australian Academy of Science and the Science and Industry Endowment Fund and that I got to experience this with such an awesome group of people. 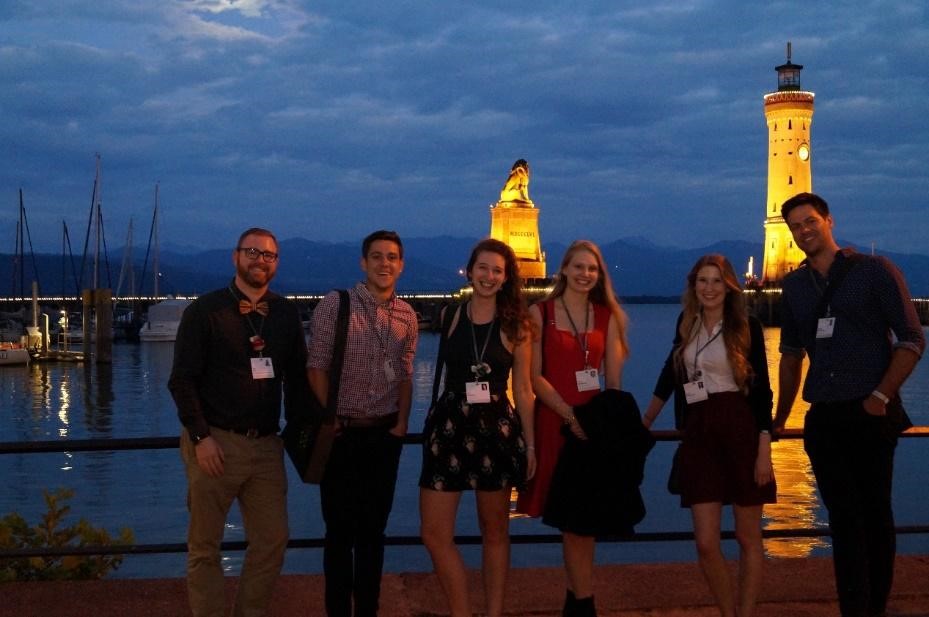 How often do you get to spend a week on an island discussing science with brilliant young researchers, surrounded by dozens of Nobel laureates? The Lindau Nobel Laureate Meeting was truly a once-in-a-lifetime experience and it has inspired me greatly in my work.

So often I find it easy to get trapped in my own work, to disconnect from the bigger picture. This can be helpful for making progress in the short term, but long term this can be detrimental for your growth as a scientist. I have just passed the halfway mark of my PhD, so I found that the meeting was a great opportunity for me to step away from my own research and appreciate the amazing science that is being done by talented young scientists around the world. Additionally, most of the lectures given by the Nobel laureates were fantastic, either showcasing the path that their research took them along or commenting on the future of science. Altogether, the meeting helped to remind me why I love being in science—discovering how things work!