The importance of advanced biological science to the Australian economy 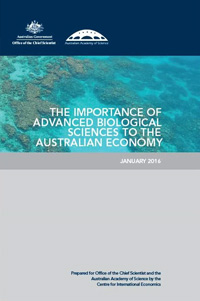 Expert scientists assessed all of the Australian Bureau of Statistics' ANZSIC 2006 classification system's 506 industry classes and rated how dependent they are on the biological sciences—including medicine and the environmental sciences. For industry classes important to the biological sciences based sector, follow-up consultations were undertaken with industry representatives to ensure that their industry experience matched the views from the workshop.

The Centre for International Economics then used statistical data and a computable general equilibrium model to calculate the economic contribution (the net value added and employment) of those classes.

The analysis builds on the methodologies used in the previous report in this series and by researchers in Europe and the United States, and takes a more rigorous approach to both the identification of sectors and the measurement of flow on impacts.

Furthermore, the economists found that Australians place considerable value on their health, and on potential improvements in the environment, even though these values are not measured using economic transactions.

The economists found that the advanced biological sciences, directly and indirectly:

In addition, the economists estimated the value of health improvements:

In the report, the heads of the sponsoring organisations note that the biological sciences contribute to outcomes other than economic production on which Australians place great value. It also illustrates how recent advances in the biological sciences are contributing to improvements in the economy, our health and the environment, and the extent to which those improvements are valued by Australians.

The importance of advanced physical, mathematical and biological sciences to the Australian economy