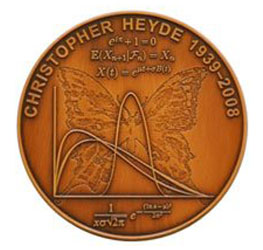 The Christopher Heyde Medal honours the contributions to mathematics by the late Professor Christopher Charles Heyde AM, DSc, Hon DSc(Syd), FAA, FASSA. Professor Heyde was the Foundation Dean of the School of Mathematical Sciences at the Australian National University, and Professor Emeritus of Statistics at Columbia University, New York.

In recognition of Professor Heyde’s broad interests in the mathematical sciences the award is offered in one of the following fields on a rotating basis:

The award’s purpose is to recognise outstanding research in the mathematical sciences by researchers up to 10 years post PhD in the calendar year of nomination, except in the case of significant interruptions to a research career. The award may be made annually, with a prize of $6,000, and is restricted to candidates who are normally resident in Australia.

The medal is made by the Royal Australian Mint, Canberra, and was designed by Mr Wojciech Pietranik.