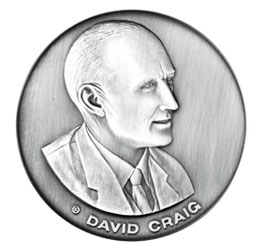 The David Craig Medal and Lecture is a career award made in honour of the outstanding contribution to chemical research of the late Emeritus Professor David Craig AO FAA FRS. Its purpose is to recognise contributions of a high order to any branch of chemistry by active researchers. The awardee is expected to present several public lectures in cities across Australia. The award is made annually and is given to candidates who are normally resident in Australia and for research conducted mainly in Australia. From the 2021 award round the Medal and a lecture will be presented at a celebration in the Awardees State capital.