To celebrate the importance of chemistry in science and society, the Academy’s National Committee for Chemistry is hosting scienceXart: elements in everyday life, a chemistry themed art competition for primary and secondary school students, in partnership with the Australian Science Teachers Association (ASTA). The competition will run over Term 2, 2019 with entry categories suitable for all year levels. The competition aims to reach students in classrooms across Australia, including in regional and remote areas.

A selection of exciting prizes will be on offer for winning entries. More details to follow shortly!

This initiative is part of the Academy’s celebration of the UNESCO International Year of the Periodic Table (IYPT) and 100th anniversary of the International Union for Pure and Applied Chemistry.

In commemoration of the latter, 2019 has been proclaimed by UNESCO as the International Year of the Periodic Table (IYPT). More information about IYPT2019

IUPAC is a non-governmental and not-for-profit global scientific organisation dedicated to the promotion of international cooperation in the chemical sciences. IUPAC is the leading authority on chemical nomenclature and is responsible for the naming of new elements in the periodic table, striving to ensure a common language for the global chemistry community. Read more about IUPAC. 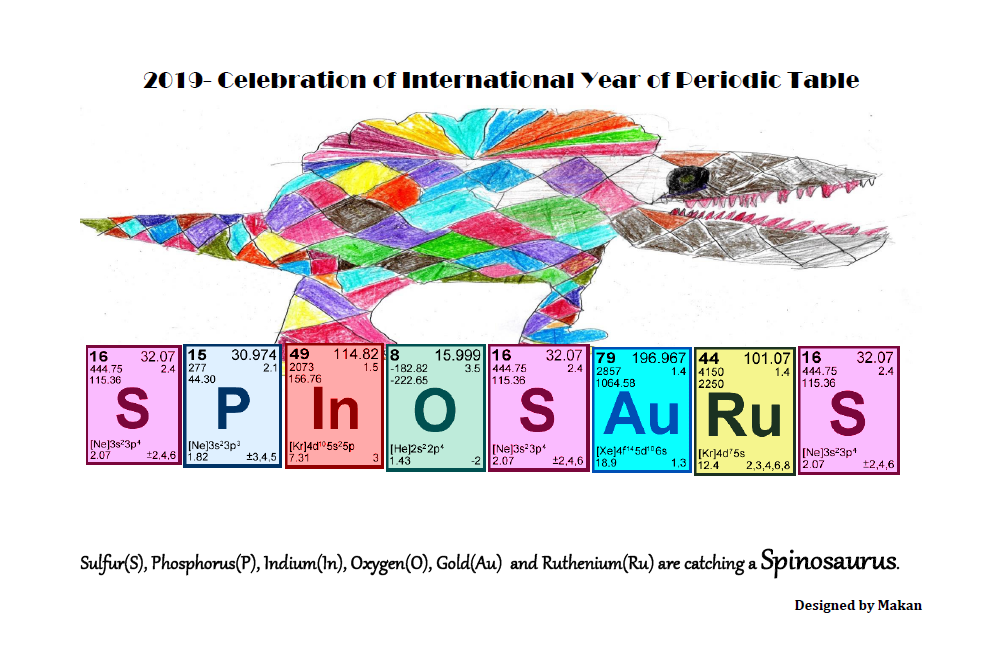 "Sulfur, Phosphorus, Indium, Oxygen, Gold and Ruthenium are catching a Spinosaurus. Even the oldest and biggest carnivore are made of elements." 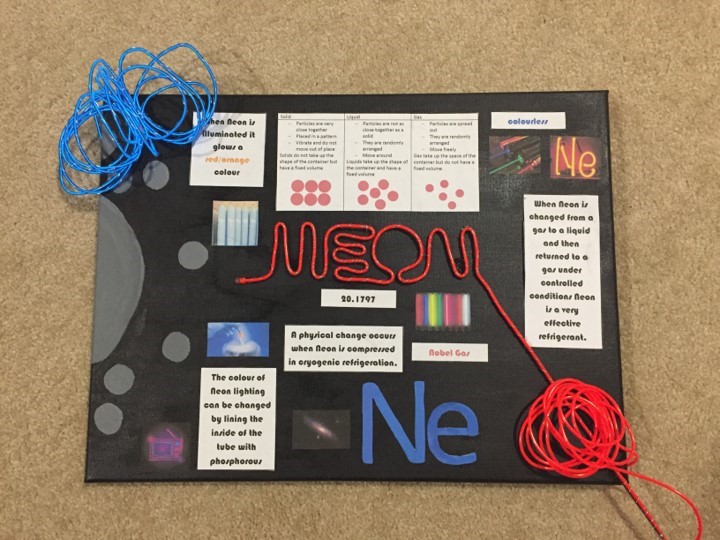 “… The most pronounced observable change in Neon is when it is energised, this is shown on my artwork by using electro luminescent tubes.  The Electro luminescent light is wrapped in wire to show that the element neon can be harnessed using human ingenuity…” 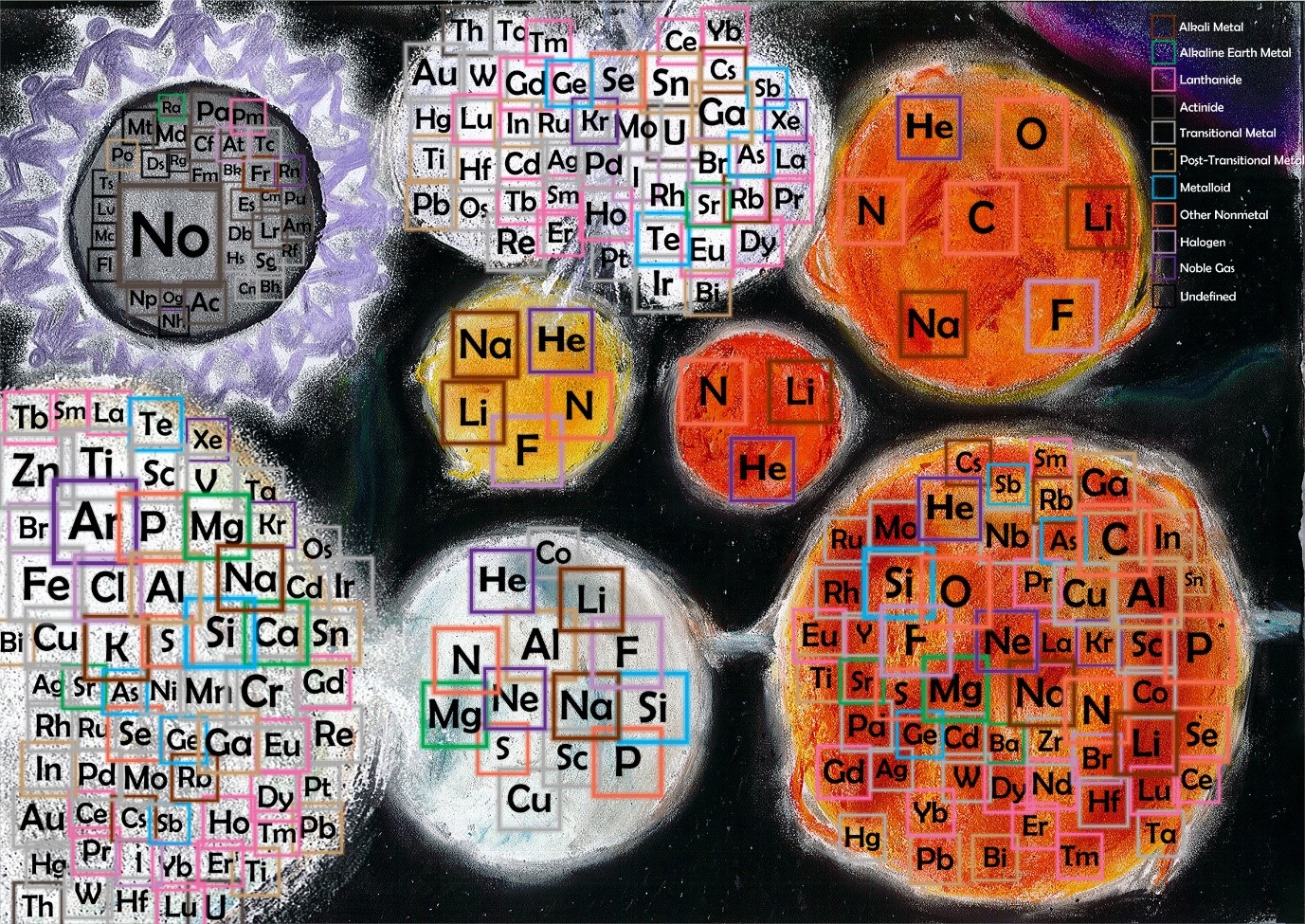 “…Americium is used in smoke detectors and is a silvery-white solid, radioactive element. Americium is very important, as without it, many people would die due to fires! This is the main reason why I chose to use Americium as my element for this competition. I also chose to do the video task, as I thought it would be quite enjoyable!” 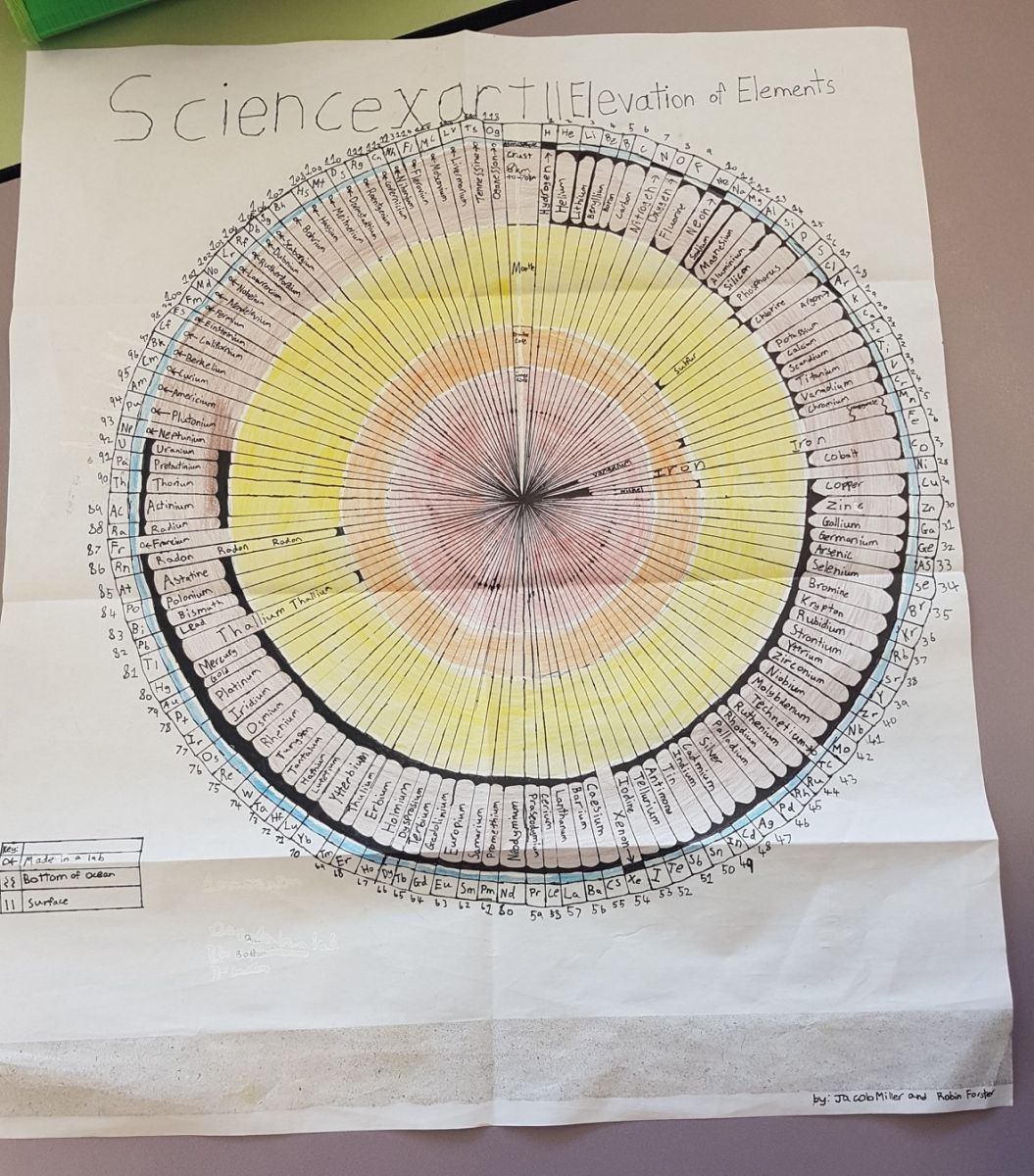 “… We have created [a graph] based on the elevation of the elements origins, we have shown where the different elements are found or were first created in the case of the artificial elements. We have put these results onto a circle that represents the earth, we have kept the order the same to make it have a sense of familiarity making it easier to read or find a certain element. The graph has been divided to the categories of atmosphere, crust, mantle, outer core, inner core, bottom of ocean and in a lab, this way it is not to complicated but information can still be taken from the graph…” 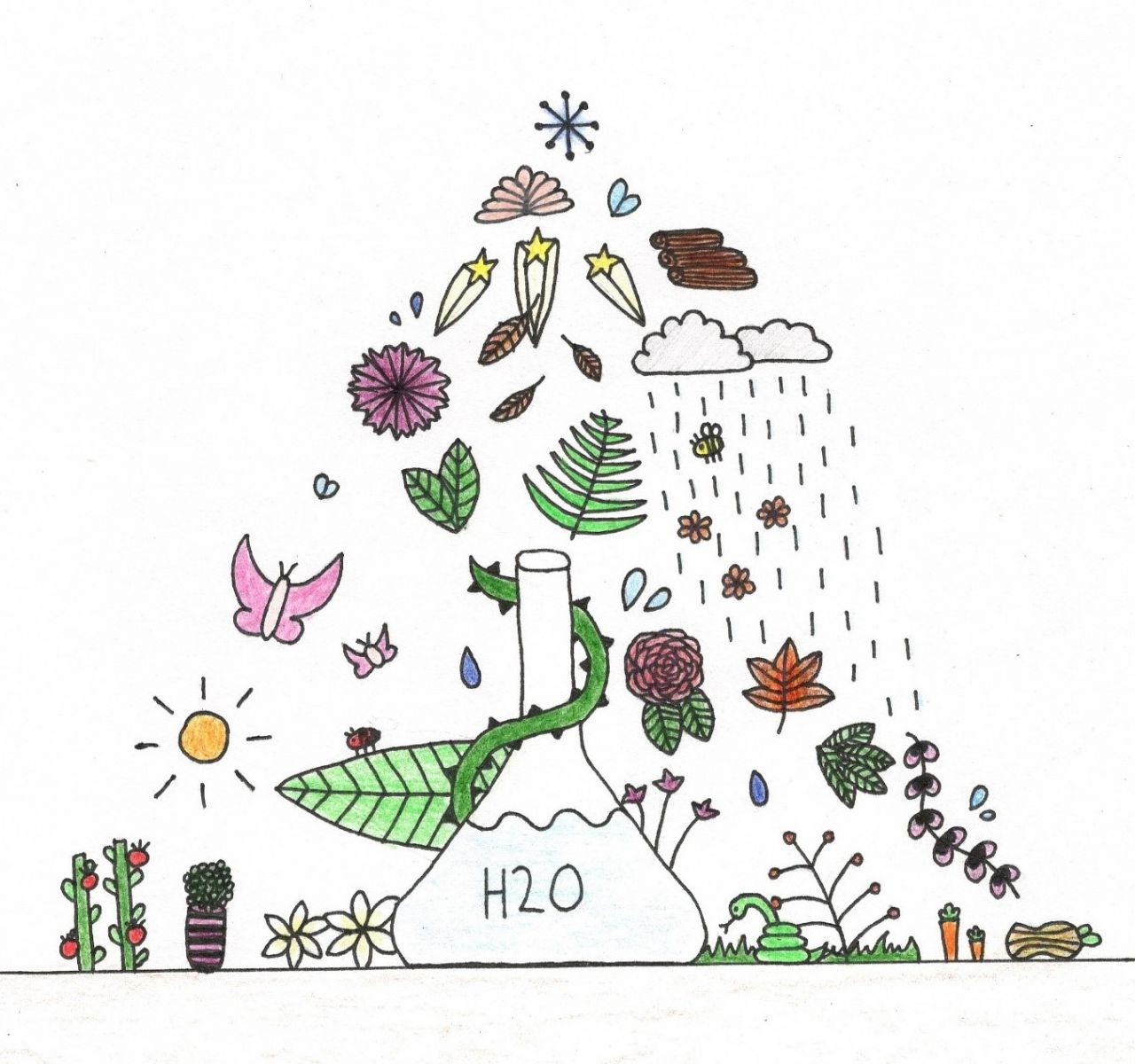 “H2O. Two of the most famous elements. A compound we need to survive. It creates so many living things, including ourselves. My artwork demonstrates how one simple molecule in a test tube can become so much more. With the right conditions, the write care, you can create plants. Weather. Life. My artwork addresses the theme 'Elements in Everyday Life' as H2O is one of the building blocks of life. It makes up so much of what we eat, what we do. It is around us. It makes us. Water. The element for life.” 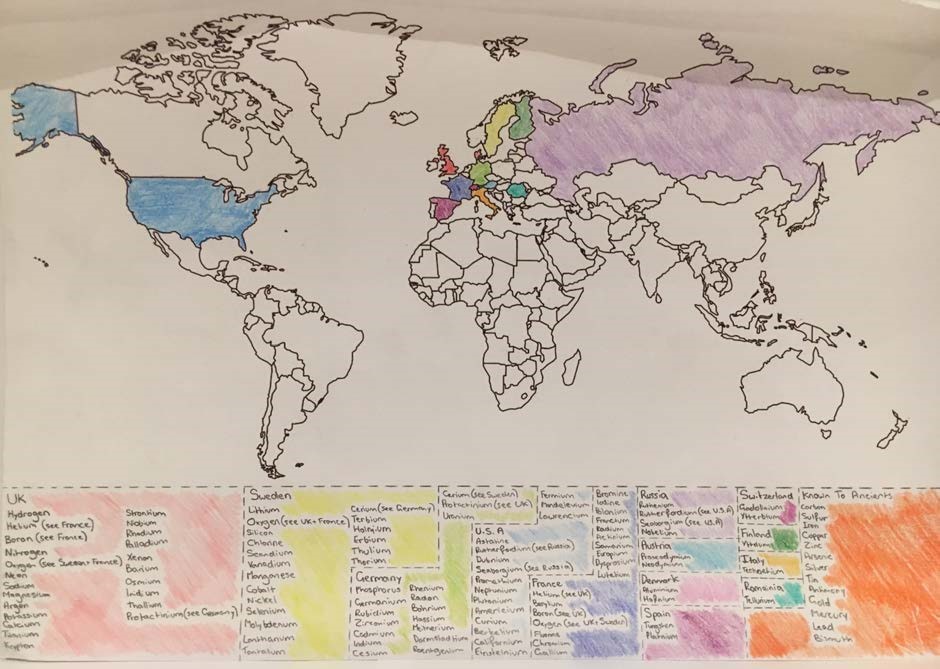 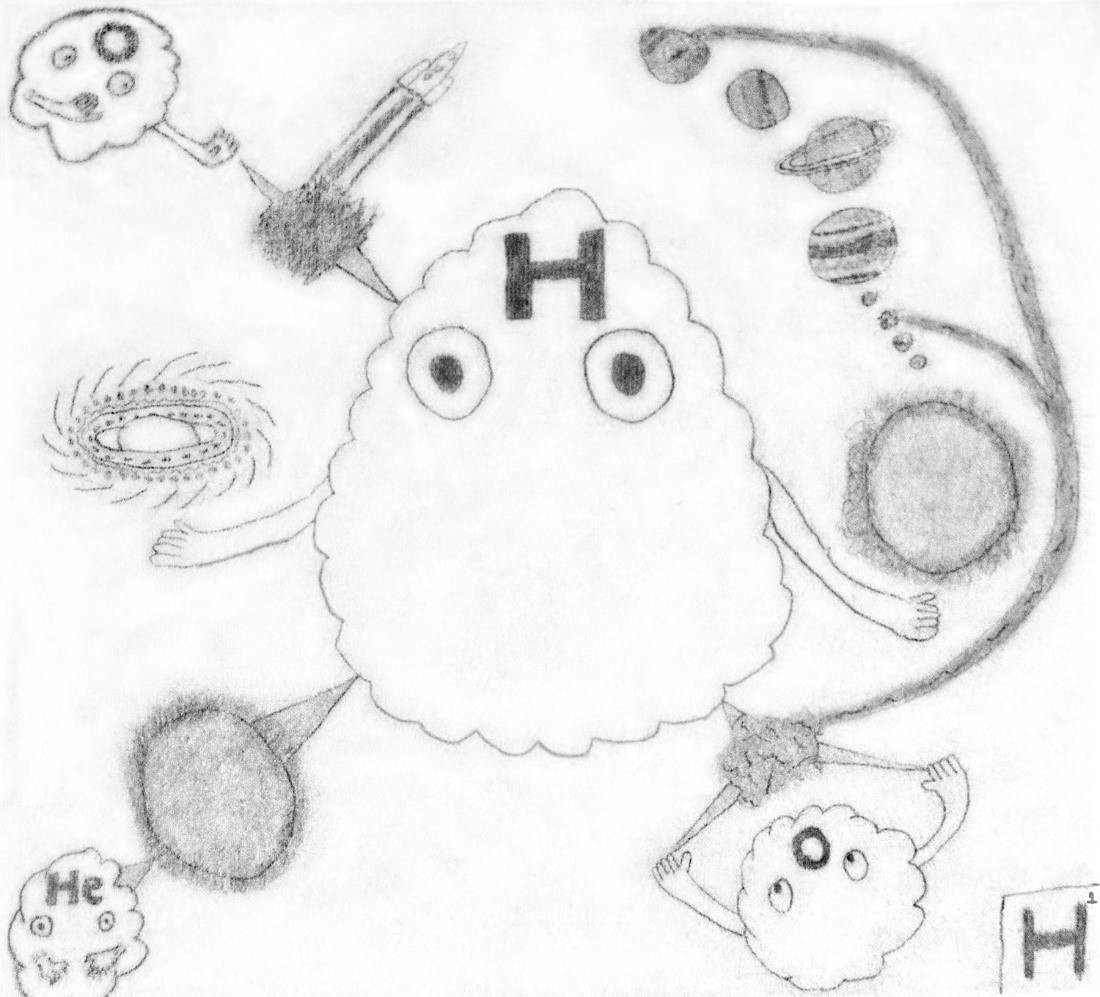 “…In the drawing, the hydrogen is holding a miniature galaxy, which represents that Hydrogen makes up about 75% of the universe. It is also holding a sun, which shows that hydrogen makes up about 70% of the sun, there is also the Solar System coming off the Sun. In the top left corner there is oxygen, which is mixing with hydrogen to form rocket fuel. In the bottom left corner there is hydrogen going through a sun into helium, which shows how helium is formed using nuclear fusion. In the bottom right corner oxygen is mixing with hydrogen to form water, which is going to Earth and Neptune.” 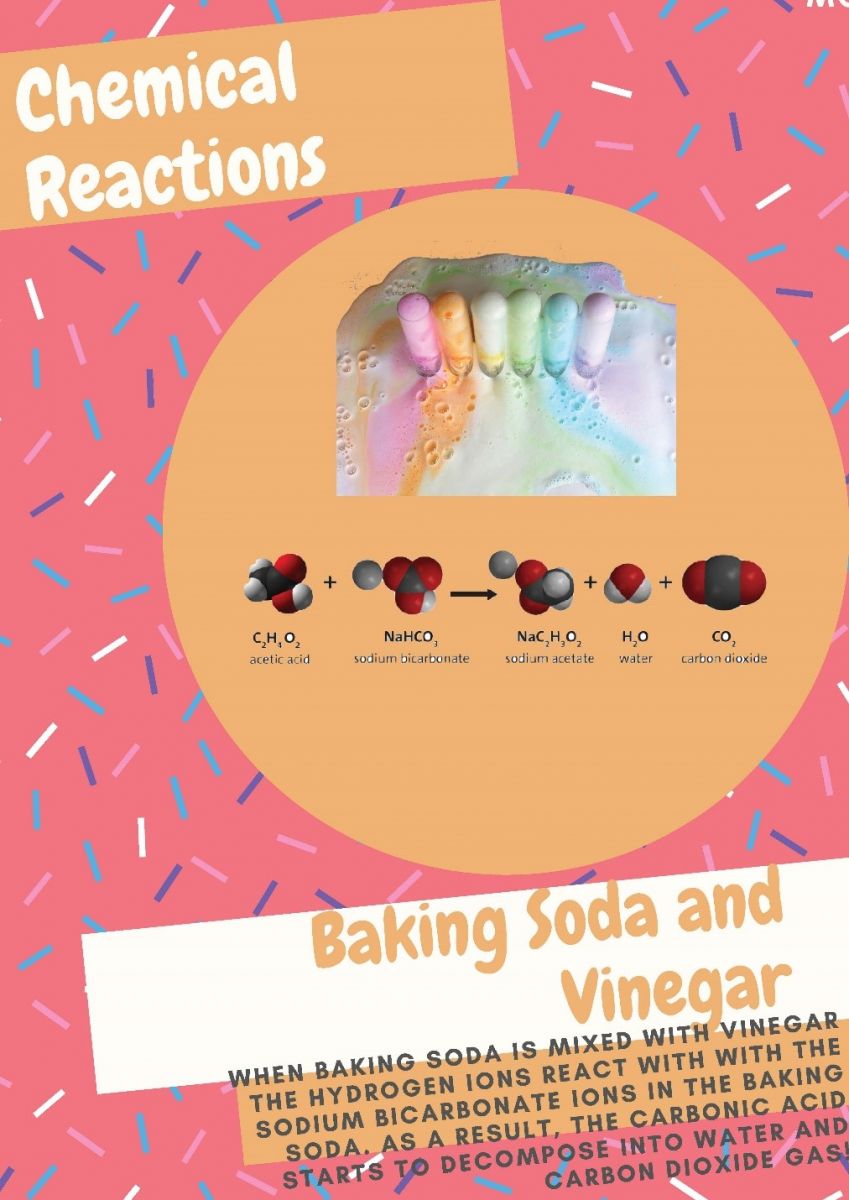 “On the poster there are six glasses that are each a different colour and baking soda and vinegar were added, and the foam had cascaded down from the glass and created a rainbow pool … ” 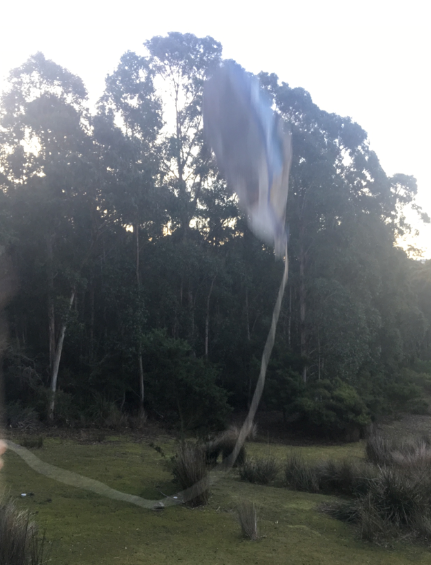 "Helium is used every day in balloons although I think that they shouldn’t be because they are bad for the environment. We need to find an alternative. I will make a balloon out of recycled newspaper and fill it with helium, then I will see if it fly’s and take a picture of it flying or not. " 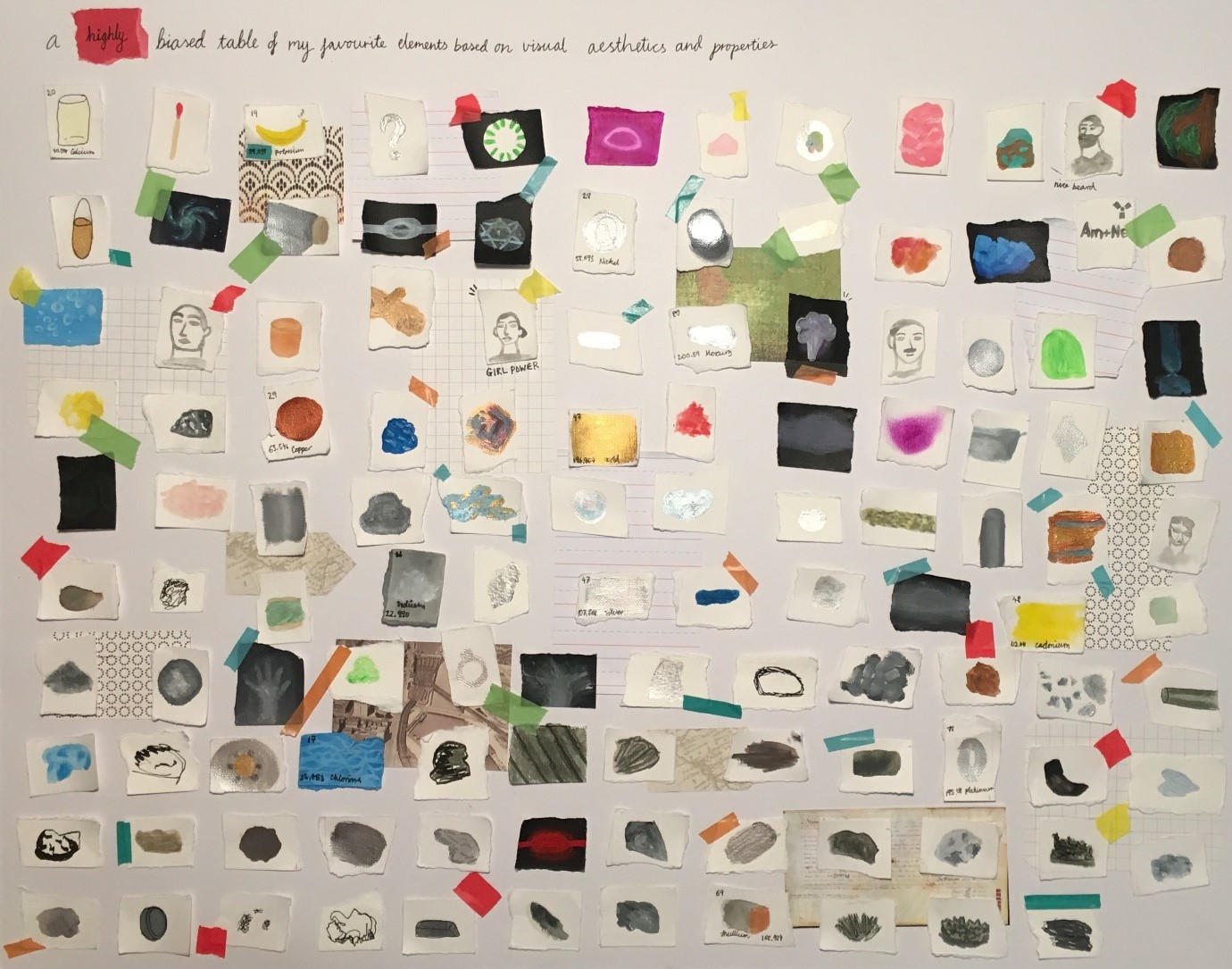 Free STEAM (Arts into STEM) resources from the web: