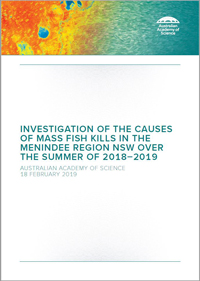 This report investigates the causes of three major fish kills in the Darling River near Menindee in December 2018 and January 2019. It was produced at the request of the Hon. Bill Shorten MP, Leader of the Federal Opposition and was made public by the Academy at the same time it was provided to Mr Shorten.

On 15 December 2018 tens of thousands of dead fish were reported along a 30 km stretch of the Darling River near the town of Menindee in New South Wales. High numbers of dead fish were seen in the vicinity of the Old Menindee Weir and Menindee Pump Station. A second, larger fish kill event involving hundreds of thousands of fish was reported on 6 January 2019 on the same stretch of river. A third event followed on 28 January, killing millions of fish. Members of the panel witnessed the beginnings of a fourth event on 4 February 2019.

Many different sectors of Australian society, and of the Menindee region itself, are distressed knowing that fish have been dying en masse, and are concerned about the implications for the health of the river. In addition, these fish are of high cultural significance to Indigenous communities in the region, including those holding Native Title rights.

In response to the first two kills, the Academy was requested by the Leader of the Opposition, the Hon. Bill Shorten MP to provide advice on the immediate causes, as well as exacerbating circumstances from water diversions, agricultural runoff or climate change, and to provide recommendations.

The Academy Panel made the following findings, illustrated in Figure 1:

The freshwater systems of the Darling are already listed as endangered (NSW, 2007) and include multiple fish species listed as threatened by the Commonwealth. Failure to act resolutely and quickly on the fundamental cause—insufficient flows—threatens the viability of the Darling, the fish, and the communities that depend on it for their livelihoods and wellbeing including the traditional owners, who have recognised rights and responsibilities.

The expert panel was asked to provide advice on: