Australia's population: shaping a vision for our future 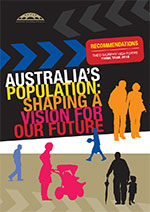 Published in 2012, the following report outlines recommendations resulting from the Theo Murphy High Flyers Think Tank on Australia's population: shaping a vision for our future.

The impact of population trajectories on our social fabric and our natural environment is a critical consideration for the health of Australia as nation, as community and as locality. The 2012 Theo Murphy High Flyers Think Tank brought 60 early to mid-career researchers together with expertise in disciplines across economics, social sciences, ecology, biology and technology to consider how a vision for Australia’s future might be shaped by population.

Researchers worked in four groups to consider specific contexts in which population trajectories might affect different aspects of our social and natural environments. Each group considered one of the following questions:

As a fundamental basis of discussion, it was agreed that no optimal population size should be sought. There is widespread recognition that no such (scientific) optimum exists and there are very few effective mechanisms that can be used to manage population size. There was also a consensus that continuous growth, either of population or the economy, will not in itself resolve the significant challenges facing Australia. Rather, growth was seen by participants as bound up with other complex and changing dynamics that need to be better understood. Finally, almost all participants were concerned that scientists and science have been relatively absent from debates on Australia’s future population. Science has a crucial role in finding solutions to the challenges that are associated with a changing and growing population.

In any envisaging of the future, the ethical dimension is present, and our desired future will influence how we value different decisions and trajectories. Whilst science can inform what we do, the decisions we take will be affected by what we value. The work groups expressed this by articulating shared values that could help guide the development of an Australia we would prefer to see. These commonly shared ideas were equity, sustainability, opportunity, diversity, justice and agency.

This last principle of agency was a commonly occurring theme, in particular when twinned with the question of how science might contribute to an understanding of future trajectories. Participant discussions centred on determining what it is we value, and what kind of future we want for our population. However these are questions not just for scientists, but for everybody, therefore the key recommendation of the Think Tank was for an informed national conversation on Australia’s future population.

A national conversation would be an initiative established by universities and researchers, but must be open to a broad cross-section of communities across urban and rural Australia. This conversation would take place at a grass roots community level. Communities would come together through a range of mechanisms to consider what kind of future we would like to see for our population. Science would inform this debate by showing what kinds of scenarios are likely to follow our current choices, and what kinds of decisions we need to make to help us realise a better future.

The role of scientists and science in facilitating this hoped-for increased dialogue about population and Australia’s future is multi-faceted. The groups identified three areas where science could contribute to such a conversation: through better access to data, presentation and interpretation of research findings, and improved communication between science and the community.

Facilitation of access to quality data and information. Improved data linkage and dissemination are important supports for more informed debate. Data could be presented using models that inform planning in ways that people can easily relate to.

Provision and translation of research outcomes. Improved communication processes within and around the scientific community through media, education and leadership in debate would increase the utility of science for the wider community. This includes presenting relevant research outcomes to a variety of audiences and providing the broader context to communities considering options.

Facilitation and participation in community conversations. Scientists can bring expertise in methods and approaches to dialogue and participatory exercises, as well as being able to individually act as change agents for communities. They can also participate within the conversation, bringing another aspect to crossdisciplinary thinking and encouraging other forms of science– community participation such as citizen science.

The two-day Think Tank saw enthusiastic contributions from all participants. Discussion was vigorous with passionate debate about a very wide range of possibilities such as obesity disincentives, technological salvation, euthanasia, managing finite resources, robots for aged care and industrial photovoltaic programs. Eventually, however, it was accepted that it is not for scientists to determine the role of such different possibilities in our future. Instead, science can be used to underpin the principles that ought to inform a proper public discussion, that is, the national conversation.

The Think Tank recognised that the current public debate on population issues would benefit from being more adequately informed by best available data and knowledge, an observation publicly shared by several academics and researchers in Australia. Scientists have an important role to play in taking the issues, and the science, directly to the community for consideration. A well-hosted conversation is informative and rewarding to all involved. By participating in such a conversation scientists would also learn how their science can be more relevant and better integrated into societal decision-making. This would help to address the relative absence of science and the role of the community in recent population policy papers such as the 2011 Sustainable Australia — sustainable communities, where the questions of what kind of sustainable Australia and sustainable communities the public might want, and how science can help us get there, are largely absent.

All of the different future population scenarios examined by the groups showed that Australia will face big and challenging questions, particularly with pressures on our social and ecological systems. Finding solutions to such problems might come about by considering alternative entry points to population debates, such as consumption, productive ageing, and urban planning. However, we believe the impact of a changing and growing population is a necessary question that needs to be considered, and one that should be part of a national conversation on what Australia we would like to create.

Science has played a remarkably small part in public debates on Australia’s future population. Community engagement on this issue has been largely absent within population policymaking. Involving the community through a national conversation, a conversation informed by science but driven by determining what we want for the future, will bring both purpose and direction to some of Australia’s most pressing challenges.

Australia's Population: Shaping a vision for our future