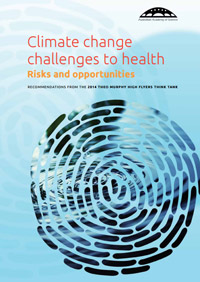 By the end of the century, global temperatures are likely to have risen by at least 2°C compared with pre-industrial times. No nation will be immune to the resulting changes in the world’s weather patterns and as international negotiations aimed at reducing future carbon emissions continue to have limited success, it would be rash for any country to fail to plan to meet the consequent challenges to their infrastructure and citizens. For Australia, one of the most important concerns is the health of its people.

This report summarises the discussions and recommendations of a group of early- and mid-career researchers from a broad range of relevant disciplines who came together in July 2014 to consider climate challenges in relation to health in Australia. Five main impacts were considered.

The report also makes it clear that those who suffer the worst effects of climate change will, in general, be the most vulnerable members of society—in particular, the sick, the elderly, the very young and the poor. Others at risk will include pregnant and breastfeeding women and those who are socially, culturally or linguistically isolated. Research should therefore be enhanced to increase our knowledge about climate change’s most likely victims and to improve management solutions aimed at helping them. There is a lack of information about less visible minority groups including the homeless, drug users and migrant groups, and this should be addressed. Information of this kind could help create a portfolio of research that can be used to improve the overall wellbeing of Australia.

Many of the concerns addressed by the different groups who produced the report have considerable overlap. The issues of disease and food and water supply provide an example of this intertwining. Rising temperatures will promote pathogen dispersion and algal blooms in water supplies. Food quality and safety will also be affected directly and indirectly by increasing temperatures, potentially changing the nutrient content of food and increasing the cost and complexity of ensuring safety standards. Adverse impacts on food production will then lead to higher prices and reduced access to nutrition, particularly in disadvantaged or remote communities. This, in turn, will make individuals more vulnerable to disease, in particular to new pathogens that might be spread by vectors, such as mosquitoes that thrive as temperatures rise.

There should therefore be a commitment to create more interdisciplinary approaches in the development of our knowledge about climate change and its many interconnected impacts on Australia and the health of Australians. Key issues that should be covered include poverty, migration, conflict, jobs, security and demographic change as well as specific forecasts about likely physical outcomes, including particular types of pathogens that may affect the country, and the effect of climate change on water supplies. Another important concern for the authors was the need to address how expert advice can best be communicated to governments and their agencies and to the broader community.

The impact of climate change in Australia is likely to vary considerably according to region. Drier conditions are expected to prevail in the southern half of the continent, affecting water supply in cities. Reduced rainfall is also likely to affect Australia’s food bowl, the Murray–Darling Basin, which may become more susceptible to pests, crop diseases and reduced water quality and volume. In addition, rising ocean temperatures and acidity will irreversibly damage key marine ecosystems, including coral reefs, and affect fisheries. Regional food security issues will therefore have implications for Australia.

Internationally, threats to human security and population health will be magnified in low-income countries that are more vulnerable to climate change effects, for example Pacific Island nations. Problems will include erosion of livelihoods; food insecurity; sea-level rise; extreme weather events; increased risk of rivalry and violent conflict within other nations; and migration and population displacement caused by depletion of resources and degradation of ecosystems required to sustain life.

Australia has an important role to play in the Asia–Pacific region, and will not be able to insulate itself completely from the effects of climate change on its neighbours. In such circumstances, Australian military personnel may become engaged in foreign conflicts, peacekeeping operations and humanitarian missions, with risks to their physical and mental health. Research into the determinants of peace and how to avoid conflict could be strengthened and allow Australia to play a constructive role in the region without endangering its military personnel.

The five different groups of experts involved in writing this report made a total of 22 recommendations. They are listed throughout the document and combined below as eight high-level recommendations. All the recommendations should be examined in the context of the evidence provided in each section; they are put forward as being critical in ensuring Australia is properly prepared for the challenges that climate change will pose to the nation’s health.

A clear message highlighted by all the groups was that some people in Australia will be more vulnerable to the effects of climate change than others. The ill and frail are at particular risk from heatwaves, for example, while poor and socially deprived individuals may suffer disproportionately from disruption to water and food supplies, particularly in remote areas and among socially diverse communities. Establishing systems to monitor the health of these individuals should be considered a priority. This process should also focus on understanding the factors that lead to people becoming vulnerable to climate-related health effects in the first place. This will help define and implement appropriate long-term strategies to deal with the future impacts of climate change.

Get the message across

In addition to coordinating research programs, there should be an improvement in communication about the dangers that lie ahead and about the need to take actions to avoid specific threats. Early warning systems for various risks (bushfires, floods, droughts) should be coordinated and an understanding gained into why some people choose to ignore warnings. In addition, basic education should be improved in order to achieve broad support for future long-term strategies adopted by the government to counter the effects of climate change.

More interdisciplinary approaches into the development of our knowledge about climate change should be created in order to help understand the various ways that it will affect the health of the nation. Key issues to be covered should include poverty, migration, conflict, jobs, security and demographic change.

There should be a reversal of the downward trend in public investment in agricultural extension and in relevant research and development. High priority should be given to establishing a Food and Water Commission, which would plan for control of future health problems related to food and water, and to setting up an Australian Centre for Disease Control. The latter would unify surveillance, coordinate responses and direct research initiatives in relation to new diseases that will affect the country as global warming takes effect. National coordination is key in these areas. The incorporation of climate–health issues into community development and building design should also be tackled.

Open up the data

Mechanisms should be put in place to make it easier to access information. At present there are long delays in acquiring mortality data—for example during heatwaves—which hampers emergency responses and also slows down the development of long-term strategies. In addition, a great deal of health, agricultural and water data is not made available online at present, and is often insufficient for comprehensive analysis. Proper access, linkage and coordination of such information are vital for the future.

The potential impact of climate change on human health will require complex responses from society—which reinforces the need for Australia to pursue the goal of national and international reduction of emissions of greenhouse gases.

There is no need to wait for the government to act. Individuals, communities, local councils, schools, universities and others should be encouraged to take early action to identify those vulnerable to climate change in their area and support them. In this respect, social media could play a critical role in the future.