Searching the deep earth: the future of Australian resource discovery and utilisation 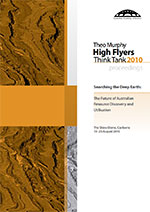 Australia is an old continent and much of its remaining mineral wealth is masked by a thick cover of weathered rock, sediment and soil that poses formidable exploration challenges. Australia relies on its mining industry for economic prosperity but currently lacks fundamental data and scientific and technological tools needed to discover new, economically valuable ore deposits deeply buried beneath the cover

In the 19th Century, individual prospectors discovered gold and base metal deposits at the surface through skill, perseverance and luck. Following their early successes, in the 20th Century our geological surveys systematically mapped Australia’s surface. The nation’s landforms, surface geological formations and structures were revealed on a continental scale, providing a scientific basis for commercial exploration on a much larger scale than before. The formations and structures discovered through this effort host the near-surface rich deposits that underpin our economy today.

These surface riches are running out. Exploration success in Australia is in decline as the challenge of seeing beneath the cover defeats the explorers. Sustaining our wealth in the 21st Century requires that we now produce the next generation of maps – maps that define the physical and chemical properties of the subsurface of Australia. To do this we need to find ways to sample and analyse the ancient covered land surfaces and to image the structures that trap deep fluids that transport economically important metals, allowing deposition of those metals.

The 2010 Theo Murphy High Flyers Think participants propose that future exploration success can be realised through an innovative, well-defined and nationally coordinated strategy. They recommend bringing together the relevant expertise into a coherent, collaborative research network, working within a well-designed strategic framework or ‘roadmap’, to address the fundamental needs of the exploration industry. To prioritise search areas across the nation it is essential to know where the cover is thick and where it is thin. We need to deploy geophysical and geochemical tools in a coordinated manner to image and understand the deep crust and upper mantle, because these regions provide the context within which economic mineralisation occurs. We need to understand the large-scale forces and processes – geodynamics – that act on and within the crust and upper mantle, and so exert control on mineralisation. We must understand the background signature of geochemistry and mineralogy where economic deposits do not occur so that we can then recognise the distal footprint of commercially viable deposits at distance from their actual location. Finally, we must ensure that the knowledge gained is properly delivered and that there is an ongoing supply of well-trained and inspired geoscientists ready to take up the exploration challenge. To achieve these goals, several strategic initiatives are proposed.

The 2010 Theo Murphy High Flyers Think Tank participants propose an integrated set of initiatives to address the challenge of ‘seeing through’ the materials that cover Australia’s ore deposits.

We recommend a national road map for deep earth exploration that integrates components of the Federal innovation effort in a coherent deep earth mapping program.

The proposed road map would be underpinned by the following six initiatives:

By taking a national approach to integrating our world-class scientific expertise, we can help the local mining industry reveal what is hidden beneath us, achieve a better return on their investment, provide new wealth to the nation and continue to prosper in this century.

The future of Australian resource discovery and utilisation