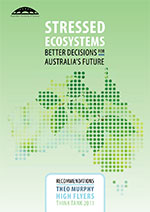 The management of finite natural resources presents complex challenges for Australia. Many activities affect Australia’s diverse ecosystems including mining, agriculture, urbanisation, invasive species, tourism, changed disturbance regimes as well as natural events such as flood and drought. As the demand for natural resources grows we face difficult trade-off s between what sea or land use should occur where and at what cost.

Decision making is the process of choosing between actions and therefore requires a prediction of the consequence of those actions. Hence robust decision making for Australia’s stressed ecosystems depends on reliable models of ecosystems built on credible scientific, economic and social data, and an understanding of the uncertainties in these predictions. ‘Models’ (quantitative or qualitative) are important for understanding the interplay between human activities and ecological effects, identifying methods to foreshadow and mitigate negative impacts on ecological systems, and making plans for preserving and sustaining ecosystems.

In each of these regions there is a tension between different potential uses and users of the ecosystem. The issues surrounding natural resource use in each of these ecosystems are diverse and these regions have been subject to very different stresses for varying lengths of time. For instance, while the Murray-Darling Basin has been subject to extensive change and stress as a result of water use over a long period, Ningaloo Marine Park is relatively untouched. It is only in the past decade that Ningaloo has seen an increase in tourism and resource extraction interest, which has raised concerns about potential impacts on the region. Due to these differences, the four groups developed recommendations that were specific to their ecosystem and these are detailed in the subsequent sections of this document. We identified four over-arching recommendations from a synthesis of the work of the four groups. We believe that the implementation of these recommendations will help us to more effectively manage Australia’s remarkable natural endowment.

A response to these recommendations would inform and provide a scientifi c basis for two current trans-government initiatives:

There are significant opportunities for policymakers to engage with researchers and stakeholders to implement the recommendations described here and produce local, regional, state and national level management plans for Australia’s stressed ecosystems. To prevent, mitigate and manage the impacts of natural events and human activities on ecosystems requires a whole-of-government approach. The Academy believes that the recommendations from the 2011 Theo Murphy High Flyers Think Tank provide a roadmap for better ecosystem decision making. Furthermore, the Academy foresees the facilitation of an implementation process to progress these recommendations that engages federal, state and local government officials, and community, regional and industry representatives.