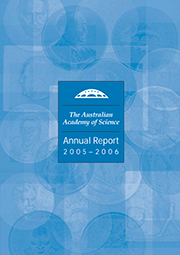 For more than 50 years the Australian Academy of Science has provided independent scientific advice to the nation and promoted a scientific culture and a long-term scientific vision within Australian society. As you will see in this year’s Annual Report, the Academy has continued to fulfil this mission, as articulated by the 2005 committee of review of the learned Academies.

The Academy was pleased to receive a most professional and considered review report that recommends adequate measures for the work of the learned Academies. It is my opinion that the Australian Government, and the Australian community more broadly, recognises the Academy as a resource of high-level expertise on scientific matters, as an authoritative source of advice on national issues involving science and its applications, and as a body that provides evidence-based leadership in protection and management of the national estate.